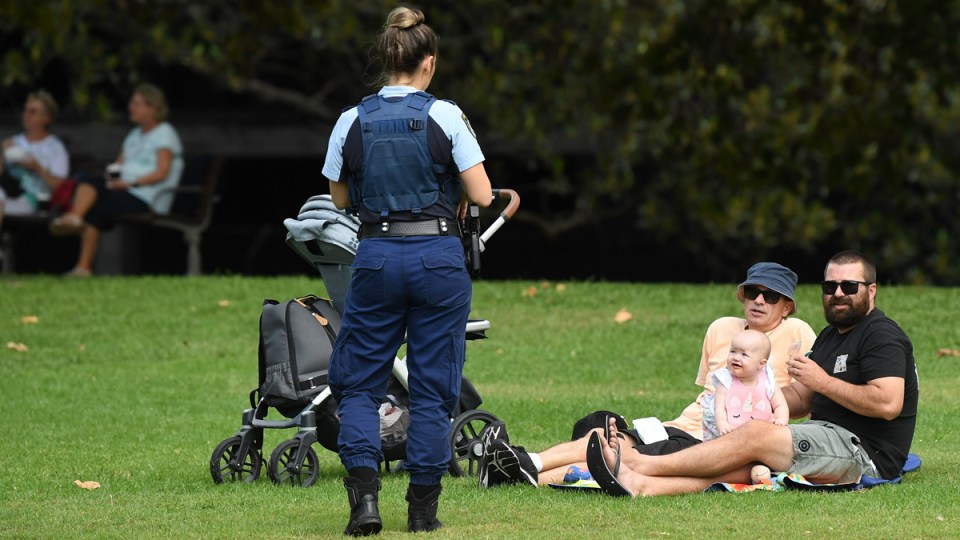 Coronavirus penalties are being applied more strictly in some states than others. Photo: AAP

Some have had the audacity to eat a kebab, while others have thrown parties with dozens of their friends – people across the country have flouted coronavirus restrictions, but how they’re punished varies on where they live.

As well as being confusing, the different approaches between states and territories could mean penalties are open to legal challenges.

What’s the current state of play?

It’s worth noting each state’s laws are slightly different, as are the processes in issuing infringement notices, the dates police started enforcing them, and the way the figures are reported.

In NSW, you can take someone on a driving lesson, while that might land you a fine elsewhere.

Here are how many infringements have been issued, as of Tuesday.

The figures highlight the divergent policing approaches in each state; they could suggest people in some areas are more compliant, or police in others more aggressive.

Adding to the confusion are comments like those of Victoria’s Deputy Police Commissioner Shane Patton, who implied some of his officers may have been overzealous in their issuing of fines.

“If some of those aren’t properly issued, or they don’t pass that common sense test, they will be withdrawn,” he said.

Fine for some, not for others

Melbourne man Callum was walking along the street with his partner when they encountered a neighbour finishing his exercise run.

“We did walk together for a distance because we live in the same area, but we kept the 1.5 metres apart,” he said.

“As we’re coming near to the end, we got pulled over by the police about 50 metres from my house.

“They just came out and pretty much started yelling at us, saying that we shouldn’t be doing what we’re doing.”

A few days later, Callum and his friend received fines for $1652 in the post. His partner, however, didn’t.

Callum wants to challenge the fine.

“It’s just a bit confusing, because we were away from everyone else … but you go to the park and there’s people everywhere, but no one’s being fined in there.”

Also in Melbourne, Belinda Stafford was questioned by police about why her daughter was playing in the front yard and not the back.

While she escaped without a fine or warning, she said she felt like she’d been interrogated.

“The police drove up and just dropped in the middle of the road, and there were cars lined up behind them,” she said.

“The driver … started asking us about why we weren’t using our backyard. I said we didn’t have any sun in our backyard and that we’re out here doing some chalk drawings on the pavement.”

Ms Stafford said her daughter wanted to join in with the Rainbow Trail movement, decorating the footpath in front of their home.

“They just sat there in the street and asked us a million and one questions about what we were doing,” she said.

“I don’t understand how any of the information I provided him in that interaction actually, you know, helped him to clarify whether or not we were breaking the law.”

Calls for clearer guidelines for police

Adelaide criminal lawyer James Caldicott said there were pros and cons with having discretionary powers, like those given to police during the coronavirus pandemic.

“In states where [the outbreak is] quite clearly is a more significant issue, like we’ve seen in NSW, Victoria, they’re going to be more strict,” he said.

“You see a more relaxed approach in states where it hasn’t been necessary or hasn’t been as serious, like South Australia, the Northern Territory and somewhat in Tasmania.

“Then you see in other states like WA most recently, a very heavy-handed approach and serious take on those discretionary matters [resulting in] a jail term.”

Despite the prospect of legal challenges, Mr Caldicott believes it’s important police have power to issue fines at their discretion given the current circumstances.

But concerns about inconsistent approaches between states, and even within borders, have prompted calls for greater clarity and transparency.

The Grata Fund, which draws on donors to provide financial support for people struggling to fund their own legal cases, is among those calling for clear guidelines for officers.

Executive director Isabelle Reinecke argued laws with broad discretions could result in discriminatory policing – or at least, the appearance of it.

“We know even in non-COVID situations that police sometimes can be subject to discriminatory biases,” she said.

A website has been set up, attached to the Police Accountability Project in Victoria, for people to share their experiences dealing with police during the coronavirus outbreak.

When it comes to the “common sense” test being promised by the Victorian Police, Ms Reinecke is not convinced that solves the problem.

The Police Federation of Australia, which represents 64,000 officers across the country, said enforcing coronavirus restrictions had been an “incredibly difficult” task for officers.

It said some officers were learning of changes to rules through the media.

PFA chief executive Scott Weber said the situation was a “moving feast every day”, and the tough stance initially taken by police had eased somewhat.

“When the restrictions were out in place, it was quite clear it was extremely urgent and extremely necessary, and police were very clear with regards to being black and white in enforcing those restrictions,” he said.

“We’re seeing now, the restrictions have started to work.

“At the start, it was very prescriptive, it was very health orientated, and on top of that – people didn’t know where we were heading.”

Mr Weber said police were ordered to take the situation very seriously, and apply the rules to the letter of the law, so, they did.

Call for clearer guidelines on coronavirus fines across Australia