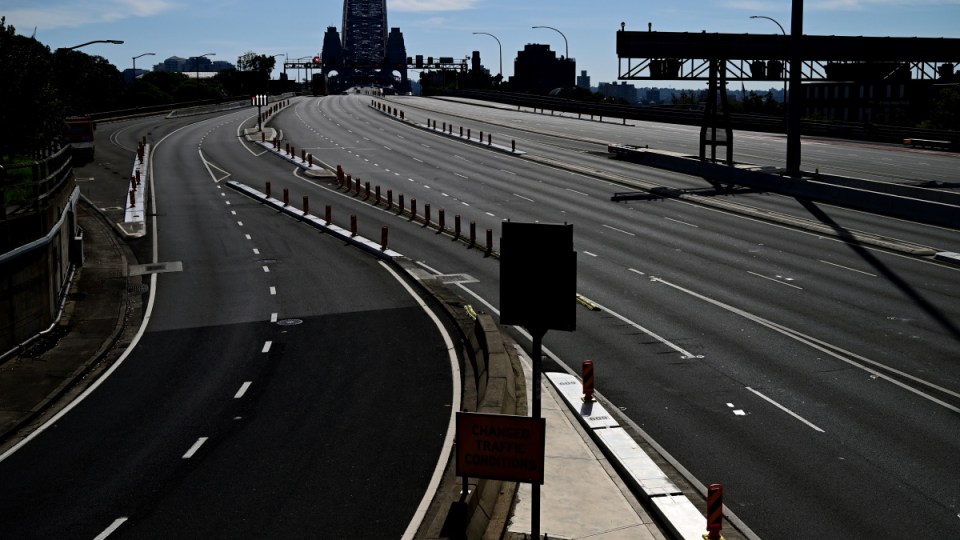 An empty freeway on the approach to Sydney Harbour Bridge on Monday afternoon. Photo: AAP

Australians are being warned the restrictions put in place to contain the coronavirus will remain for many more weeks, despite the nation’s infection curve improving.

Prime Minister Scott Morrison told Seven’s Sunrise program on Tuesday that state and federal leaders would meet again this week to discuss when restrictions could be relaxed.

“I do want to caution Australians that we’re not in that phase yet … we’re many weeks away from being in a place like that,” he said.

“You’ve seen in places like Singapore and Sweden and other parts of the world where the virus has just taken off again.”

Mr Morrison said any relaxation of restrictions would need to be backed up by a strong health system and even stronger testing regime.

“If you take your eyes off this thing, [it] gets away from you. So we do need to understand what the prerequisites are and the things we need to achieve before we can start to ease some of those restrictions,” he said.

On Tuesday afternoon, the nation’s deputy chief medical officer Professor Paul Kelly said it was important to “look at where we are in terms of the epidemic”.

“We have flattened that curve and decreased to a very large extent the new cases each day.

“The question is what do we do next? We definitely don’t want to just open up everything that we’ve dampened down on so far because we’ve seen in other countries what has happened with an uncontrolled epidemic and we cannot afford to do that in Australia.

“And so there will be a range of matters that we will put to national cabinet to consider, but particularly the strategies moving forward and then within that would be what to look at in terms of the restrictions which may be least risky in relation to increasing the number of cases and on the other hand having the most benefit for the wider society.

On Tuesday, the number of Australians infected with COVID-19 had risen to 6366. The death toll was 61.

Chief medical officer Brendan Murphy said it was important Australians kept up social distancing measures for the time being, as every single undetected community transmission could further infect a lot of people.

“The scale of measures at the moment is something that we clearly do have to review … but it’s not now, it’s within the next few weeks,” he told ABC radio on Monday.

“I think we need to look at all of the data, look at our preparedness, and the national cabinet will be making a lot of decisions about what, if anything, can be relaxed in the coming weeks.”

Professor Murphy said he would be concerned if social restrictions were relaxed before public hospitals were fully prepared and the country had enough personal protective equipment.

Despite the official caution, WA Premier Mark McGowan has said the state could consider relaxing coronavirus restrictions as early as May 1.

“We’ll review it monthly. The first major review will be coming up in a couple of weeks.”

WA, which has closed its borders to even returning residents, has been reporting lower infection rates for some time.

It has 527 confirmed cases. Of those, there are 32 people with COVID-19 in Perth hospitals, 12 of those in intensive care.

In NSW, Premier Gladys Berejiklian said there had been a major drop in new infections at the Easter long weekend.

In the 24 hours to 8pm on Monday, there were seven new COVID-19 cases, bringing the total number since Saturday to just 23. The total number of people infected is 2870.

“If you look at other countries in the world … and you look at where they have gone compared to where we have gone, I think we should feel satisfied that we have contained the spread to the extent that we have,” Ms Berejiklian said on Tuesday.

“In those areas we have diagnosed identified cases of COVID-19 where there aren’t clear links to clusters and so we want to assure ourselves that there is not broader community transmission occurring in those areas,” she said.

State Health Minister Jenny Mikakos said 40 patients with COVID-19  were in Victorian hospitals, with 15 in intensive care. A further 1118 had recovered and about 71,000 had been tested.

“We are announcing that from today, Victoria will have the widest testing criteria in the nation,” she said on Tuesday.

“Anybody who has relevant symptoms, a fever, or acute respiratory symptoms will be able to be tested for COVID-19.”

Premier Annastacia Palaszczuk confirmed an additional 11 COVID-19 cases had been recorded across the state overnight, bringing its total to 998.

Ms Palaszczuk said 74,013 tests had been conducted, five Queenslanders had died from the coronavirus and 442 patients had recovered.

Although the daily rate of positive tests has fallen to single figures, public gathering restrictions will remain.

Meanwhile, Treasury modelling released on Tuesday shows Australia’s unemployment rate is expected to nearly double to 10 per cent because of the pandemic.

Mr Morrison said the jobless rate could have been much higher without government support, but acknowledged mass job losses were taking a “heartbreaking” toll.

Relaxation of restrictions ‘many weeks away’: PM