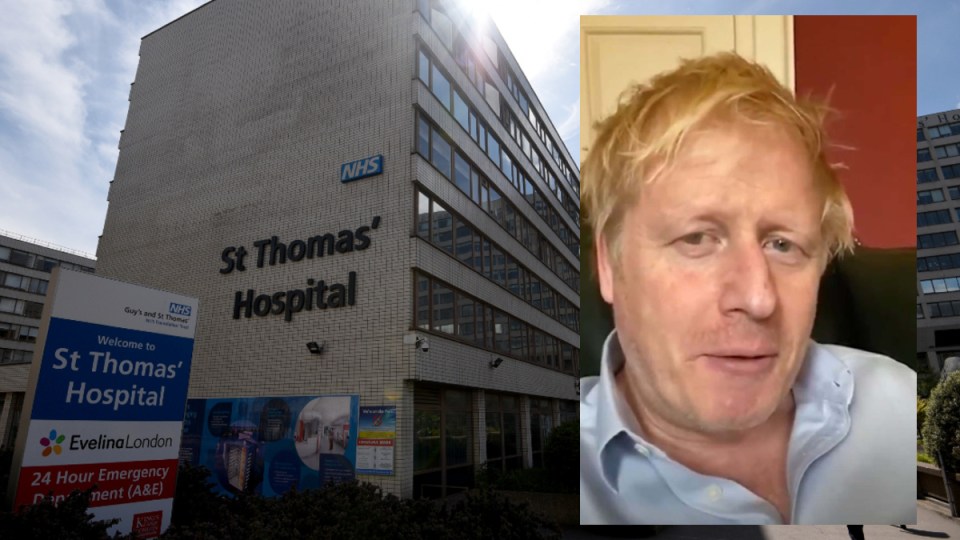 Boris Johnson (inset) was moved to hospital on Sunday (local time) after his condition worsened but he appears to be on the mend.. Photo: Getty

British Prime Minister Boris Johnson has left intensive care after three nights of treatment but will remain under close observation in hospital.

Mr Johnson, 55, is said to be in “extremely good spirits” after being returned to the regular ward, four days after he was admitted to St Thomas’ Hospital in London on Sunday evening (local time).

News of the PM’s turnaround came as Britain clapped its health care workers for the third week running as the hashtag YesBoris trended in the UK alongside #clapforourkeyworkers and #ClapForTheNHS.

“The prime minister has been moved this evening from intensive care back to the ward, where he will receive close monitoring during the early phase of his recovery,” a spokesman from his office said in an emailed statement.

“He is in extremely good spirits.”

Meanwhile the world has marked the sobering milestone of 100 days of COVID-19, with more than 1.5 million infections and 94,000 deaths around the globe as well as untold economic damage that is expected to worsen.

World Health Organisation director general Tedros Adhanom Ghebreyesus said it was on 31 December 2019 that the Chinese government reported the detection of a mystery illness described at the time as “pneumonia of unknown cause”.

Today marks 100 days since @WHO was notified of the first cases of what we now call #COVID19 in 🇨🇳
Over 1.3M people have been infected & almost 80K have lost their lives.
This pandemic is much more than a health crisis. It requires a whole-of government & society response. pic.twitter.com/QGMQn5KqSj

It was eventually named COVID-19 and has since infected more than 200 countries, sparking aggressive lockdown measures in a bid to limit the spread of the highly contagious disease.

The IMF has warned that the effects of ongoing pandemic could trigger the worst economic fall-out since the 1930s Great Depression, with only a partial recovery in 2021.

IMF managing director Kristalina Georgieva said the global outlook had been “turned on its head”, warning that more rescue packages would be needed on top of the $US8 trillion ($12.6 trillion) already committed globally.

“Just three months ago, we expected positive per capita income growth in over 160 of our member countries in 2020,” Ms Georgieva said.

“Today, that number has been turned on its head: we now project that over 170 countries will experience negative per capita income growth this year.”

News of Mr Johnson’s health improvement prompted a small rise in the value of sterling against the dollar.

However, the government statement did not give any details on when Mr Johnson may be able to resume leadership.

Mr Johnson was the first world leader to be hospitalised with the coronavirus, forcing him to hand control of the world’s fifth-largest economy to foreign minister Dominic Raab just as Britain’s outbreak approaches its most deadly peak.

Mr Raab – speaking before the latest announcement – stressed the importance of allowing the prime minister to focus on recovery.

US President Donald Trump tweeted that the improvement in Mr Johnson’s condition was “great news”.

Earlier Mr Raab told a news conference it was too early to end a widespread lockdown because Britain had not reached the peak of the outbreak yet.

The UK death toll in hospitals from coronavirus now stands at 7978, a rise of 881 on the day but a smaller increase than the 938 seen in Wednesday’s data.