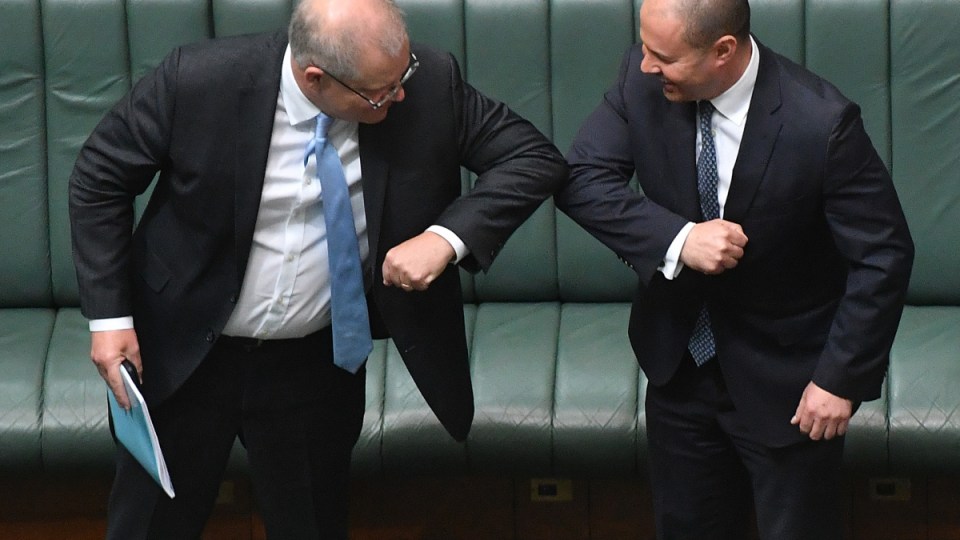 Scott Morrison has declared Australia will “never surrender” to the coronavirus as he warned the nation there was a long road ahead and restrictions are not likely to be lifted anytime soon.

Pledging to “check at the door” ideologies, the Prime Minister acknowledged the $130 billion cost of the JobKeeper plan to be debated by Parliament on Wednesday was unprecedented.

But despite the restrictions and shutdowns, he said Australia would not surrender its values or way of life, even if the nation “looked different” on the other side.

“Defending our sovereignty has always come at a great cost, regardless of what form that threat takes, and today will be no different,” he said.

“Above all, our sovereignty is sustained by what we believe as Australians, what we value and hold most dear, our principles, our way of life, a way of doing things.

“We will never surrender this. So make no mistake, today is not about ideologies. We check those at the door. Today is about defending and protecting Australia’s national sovereignty.

But he stressed that Australia needed to tackle twin crises: the health impact of COVID-19 and the economic impact.

“Our sovereignty is enabled by having a vibrant market economy that underpins our standard of living, that gives all Australians the opportunity to fulfil their potential,” he said.

“We have a long way to go. Through the actions we have taken to date, we have bought Australia valuable time to chart a way out over the next six months. But there are no guarantees, and it could well take far longer.

“Our country will look different on the other side but Australians will always be Australians. We have navigated the road in, and we can now see some encouraging signs.”

Mr Morrison said preparing Australia’s health system for the challenge to come – increasing intensive care unit capacity and ensuring supplies of masks and personal protection gear for nurses and doctors – remained one of the biggest priorities.

In the 16 days since Parliament last met, Australia’s coronavirus tally has risen to 5956 and 2547 patients have recovered. Of those, 294 remain hospitalised, with 92 in intensive care and 32 on respirators.

The death toll has risen to 50. But Mr Morrison said there are promising signs Australia is “flattening the curve” of new cases.

“We are flattening the curve. We are buying ourselves precious time in this fight. And I want to thank the overwhelming majority of Australians for doing the right thing. You are saving lives, you are saving livelihoods. But we have to keep our — keep up our efforts.”

Labor leader Anthony Albanese said the ALP would seek to amend the JobKeeper legislation to extend eligibility to casuals with less than12 months’ service with a single employer.

However, if – as expected – these amendments fail, Mr Albanese said he would not block the $1500 a fortnight wage subsidy that Labor had urged the Morrison government to consider for weeks.

“We should reflect on the fact that so many of those front-line workers – and think about it – cleaners, childcare workers, teachers, healthcare workers, nurses are, in so many cases, defined not just by being primarily female occupations but they are our poorest paid,” he said.

“They are the people we are relying upon.”

As NSW flagged a discussion on re-opening parts of the economy, Victorian Premier Dan Andrews cautioned those calling for immediate relaxation of social distancing laws and bans on cafes and restaurants opening.

“We have to be prepared for the long haul,” he said.

“A vaccine for this sort of virus is not something that has been done before.”