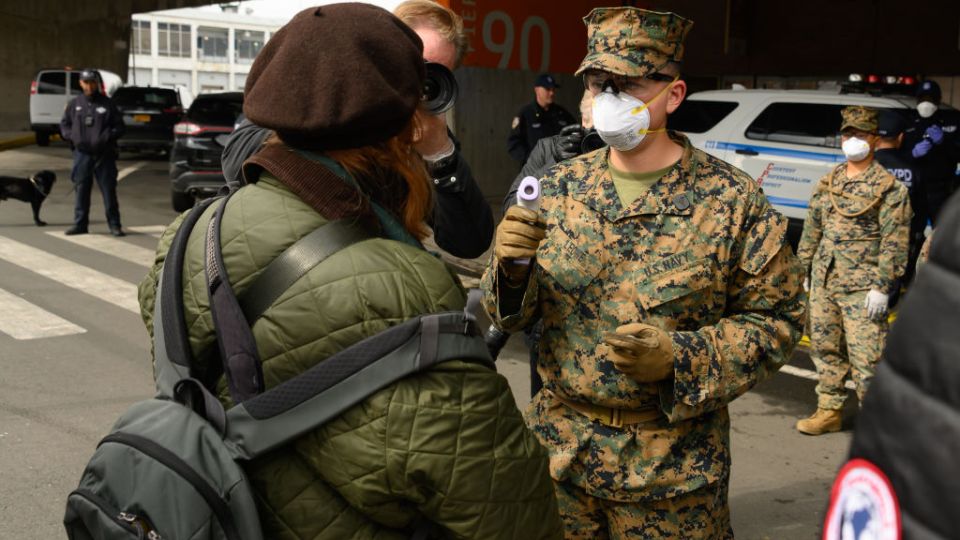 More American troops will be sent to New York which is the the USA's COVID-19 epicentre. Photo: Getty

President Donald Trump says 1000 military personnel will be sent to New York City as the country braces for its “toughest” weeks ahead.

“There will be a lot of death, unfortunately. There will be death,” Mr Trump said in a sombre start to his Saturday (local time) briefing on the pandemic.

“We’re going to be adding a tremendous amount of military to help.”

It comes as the Chinese government and billionaires Jack Ma and Joseph Tsai, the co-founders of the online marketplace Alibaba, gifted 1000 ventilators to New York.

Mr Cuomo warned on Thursday that the state’s stockpile of ventilators would be exhausted in six days if the number of critically ill coronavirus patients kept growing at the current rate.

New York is the pandemic’s US epicentre, with more than 3500 deaths across the state on Sunday morning and about 15,000 coronavirus patients hospitalised.

More than 4100 are in intensive care – many, if not all, of them needing ventilators.

America has the world’s highest infection tally with 301, 902 confirmed cases and 8175 deaths on Sunday morning.

He said the goal was to stay several days ahead of critical medical needs in each state. But he also suggested that states were asking for more medical supplies than they really needed.

“The fears of the shortages have led to inflated requests,” Mr Trump said.

Louisiana officials have said New Orleans is on track to run out of ventilators by next week.

Mr Trump also revisited a familiar message, saying he wants to get the economy up and running as soon as possible.

At one point during the unfolding outbreak, Mr Trump said he had hoped to open up businesses by Easter, April 12. He later acknowledged that was not possible, ceding the month of April after seeing rising death toll projections.

“We have to vanquish the virus as quickly as we can. … We have to get back to work,” he said.

Much of the country is under orders to stay home, including professional sports leagues that were among the first to clamp down in the pandemic.