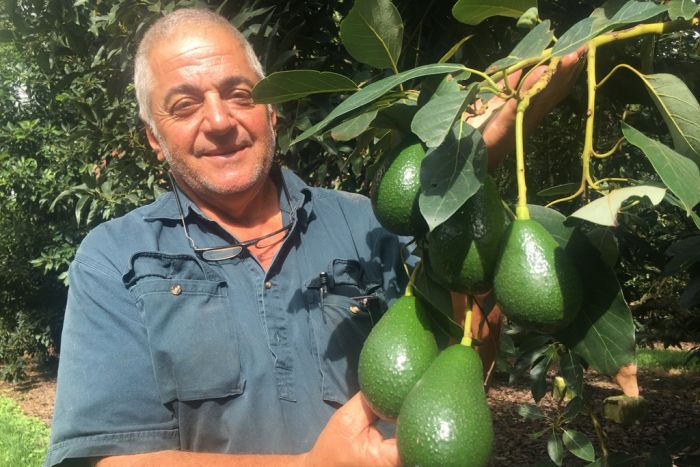 Australia’s avocado growers are urging brunch lovers to keep up their smashed avo habit at home after a dramatic crash in the market set off by the coronavirus shutdown of cafes and restaurants.

The food-service industry is a massive market for avocado growers, taking fruit that doesn’t make the premium grade sold in fruit shops and supermarkets.

Wide Bay, Queensland, avocado farmer Lachlan Donovan said he was lucky he still had orders to fill through chain stores.

“With lower-grade stuff it’s certainly not worth the money … processed product, like guacamole that went straight to different takeaway shops or retailers, that is a market that has collapsed.”

“There’s probably going to be a reasonable amount of fruit that’ll get dumped.”

“Avocado growers are [feeling] the same as everyone at the moment,” he said.

Australia’s avocado industry has boomed in recent years, last season producing more than 85,000 tonnes, 55 per cent of which were grown in Queensland.

Traders at major wholesale markets in capital cities were caught by surprise when Prime Minister Scott Morrison issued a Sunday-night edict that all restaurants, cafes, hotels, pubs and clubs be shut to halt the spread of coronavirus..

“I don’t think anyone saw this coming,” Mr Bugeja said. “No one saw it coming.”

“It’s hard going and it’s going to get harder for a lot of people.”

After a week in freefall, he said, the market settled slightly but he expected even premium-grade prices to continue slipping as the harvest continued across Queensland.

Mr Bugeja said he was working with retailers on ideas to shift a greater volume of the fruit — including a suggestion to sell them by the kilogram instead of individually.

“It may have a few rub marks on the skin but internally, between premium and class-one fruit, it’s all the same. It’s only the look of the fruit, that’s all it is,” Mr Bugeja said.

“So it’s just more price driven. If you can sell for the right price, there’s more chance of them buying and hopefully, sooner than later, the food service will come back, not just for me, for everyone.”

And growers don’t want consumers to steer clear of the fruit, just because their usual brunch spot is closed.

“It’s that little luxury you can have at home, too.”

To find the perfect avocado, Mr Kochi recommends shoppers buy while they’re still hard and let them ripen at home.

“Keep it on your shelf in your kitchen for a day or two, until it starts to soften to your finger touch,” he said.

Mr Donovan believes the poorer reputation of the Shepard variety compared to Hass is not deserved.

“The Shepards are probably a lot more forgiving, even when they look bruised, they don’t brown off,” he said.

“All you’re wanting to pick is a nice clean avocado. If you want to eat it tonight, just [choose one] a bit soft towards the stem.”

And the best way to eat avocado?

While everyone has their favourites, Mr Donovan said you can’t go wrong with a few slices of avocado with your steak for dinner.

“I love avocado with steak instead of chips. Just avocados with everything.”