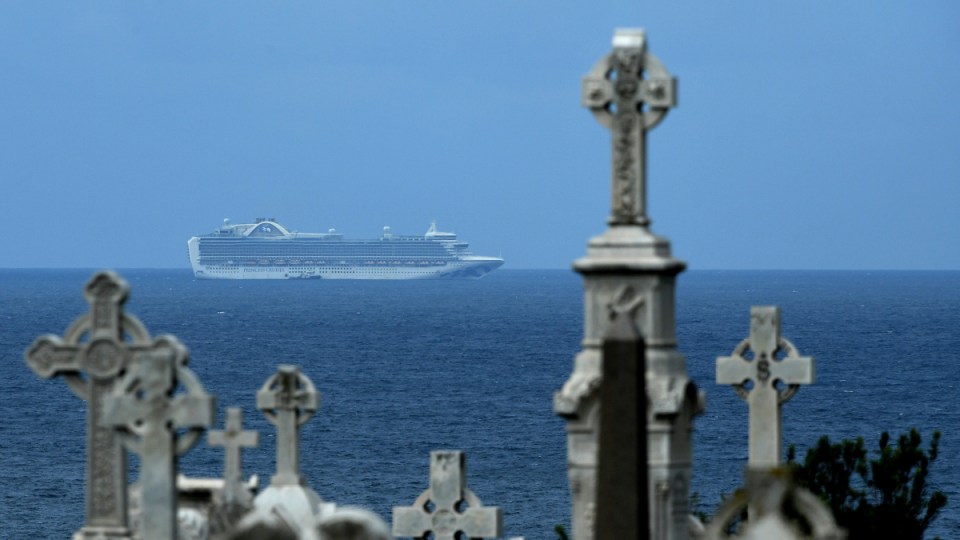 The Ruby Princess off the coast of Sydney on Wednesday. Photo: AAP

A military-style operation will be launched to get doctors on board cruise ships floating off the NSW coast to test thousands of crew members for COVID-19.

Doctors will be flown by helicopter to eight foreign cruise ships in a joint government operation to test and evacuate patients needing urgent coronavirus treatment to try to end a maritime standoff.

Once crews have been treated, the federal government will increase pressure on foreign cruise companies to sail away from Australia.

NSW Police are locked in a stand-off with foreign cruise ships, urging them to proceed immediately to their home ports rather than risk flooding NSW hospitals with COVID-19 patients.

Under the federal government’s coronavirus restrictions, all cruise ships are banned from entering Australia until June 15.

In an attempt to end the stalemate, NSW Police Commissioner Mick Fuller said helicopters would be used to fly doctors on board.

“They will go on and they will do an assessment and the standard temperature check and ask questions around symptoms of the virus,” Mr Fuller said on Thursday.

“If the crew is fit and healthy, I have no hesitation in asking [Home Affairs] Minister [Peter] Dutton to enforce the orders for them to leave our shores.”

Anyone requiring urgent medical attention would be brought ashore.

Mr Fuller said there were eight cruise ships off NSW, carrying about 8500 crew members. They include the Pacific Explorer, ­Carnival Splendour, Ovation of the Seas and the infamous Ruby Princess.

All known Australian crew had been extracted.

Little is known about the state of health of the remaining crew members. But already more than a dozen people have been brought off the ships for medical reasons.

More than 1000 crew reportedly remain aboard the Ruby Princess, which has become a major source of coronavirus infection in Australia. It is registered in the Bahamas.

Two of the cruise liners have agreed to refuel in coming days and depart Australian shores.

“If a small percentage end up with the virus, it will overwhelm our health system and everything we’ve done to date will be wasted,” Mr Fuller said.

“Every cruise ship that leaves, I see it as a victory for NSW.”

The federal government will pay for the operation, which will be coordinated by the Australian Border Force with assistance from NSW Police.

“What we’ve agreed to do is to look at each of these vessels and to do a proper assessment of what’s happening on board,” Mr Dutton told 2GB on Thursday morning.

“If you force these boats to set sail and they have people that die or get seriously sick by the time they get a couple of hundred nautical miles off the coast, they will turn around and come back.”

The Maritime Union of Australia said the situation was a humanitarian crisis waiting to unfold.

“The Australian government must urgently act to allow the safe repatriation of all crew members not essential for marine operation to their home countries,” national secretary Paddy Crumlin said.