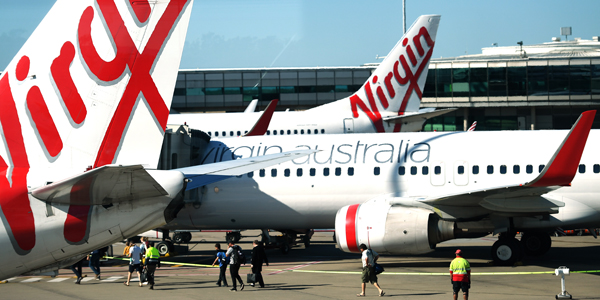 Virgin Australia has told a Senate inquiry it is relying on JobKeeper to maintain its pool of staff. Photo: AAP

Virgin Australia has lifted out of a temporary trading halt, after confirming reports that it has asked the federal government for a $1.4 billion loan to help it through the coronavirus crisis.

Virgin said its bailout proposal was “subject to approval by the Virgin Australia Holdings board and the Australian government” and “may or may not include conversion to equity in certain circumstances”.

Qantas CEO Alan Joyce warned against federal government assistance for his airline’s competitor, saying help should not be offered to businesses that had been “badly managed”.

Mr Joyce has repeatedly said airlines are facing a “survival of the fittest” scenario as the coronavirus pandemic grounds thousands of planes.

He has previously said Qantas is not seeking a bailout, but has warned that if Virgin gets government aid, the federal government needs to “level the playing field” to avoid distorting the market.

A Qantas source confirmed the airline’s revenue was three times higher than Virgin’s, meaning it would want a $4.2 billion loan.

Last week, Qantas raised about $1 billion in additional debt from the market in a loan secured against planes it owns.

The company has $3.5 billion in other remaining assets it can use to raise more cash.

Virgin went into a trading halt shortly before 10am pending a market announcement.

It later released a statement confirming the company “continues to explore a range of options to manage through the COVID-19 crisis”, including “requesting financial support from the Australian Government in the order of $1.4 billion as part of a broader industry support package to prepare for a prolonged crisis”.

“We have been in ongoing discussions with government about the support the whole industry will need if this crisis is prolonged,” a Virgin Australia spokeswoman told ABC News.

“Companies like ours are taking a range of measures to respond and manage the financial impact.

“However, the support we’ve proposed will be necessary for the industry if this crisis continues indefinitely, to protect jobs and ensure Australia retains a strong, competitive aviation and tourism sector once this crisis is over.”

Call for government to take a stake in airlines

There is speculation a bailout could involve the government becoming a part-owner, but Treasurer Josh Frydenberg has not ruled that in or out.

Mr Frydenberg said the government strongly supported the sector, and had already announced $715 million worth of measures, including waiving certain government fees and charges on the airlines.

“We have already illustrated our commitment to having a viable, sustainable aviation sector.”

Mr Sims has urged restraint and cooperation, arguing, “we really need companies working together during this crisis and talking about the survival of the fittest could be seen as quite unhelpful”.

Virgin Australia is 90 per cent owned by offshore airlines including Etihad Airways, Singapore Airlines, Nanshan Group, HNA Group, and Richard Branson’s Virgin group, which are all facing their own cash-flow challenges amid the coronavirus pandemic.

Credit Suisse analysts estimated last week that with virtually no revenue coming in, Virgin could eat up most of its $900 million cash balance by June and would require additional liquidity to survive the crisis.

Rating agencies S&P Global and Fitch also last week downgraded its outlook on the company after Virgin announced it would slash domestic capacity by 90 per cent and ground its budget airline Tigerair indefinitely.

S&P said its position had not factored in federal government support for the airline, but the agency believed “that the government may have an incentive to support Australian carriers given the temporary nature of this crisis”.

“We nevertheless believe the scale of the COVID-19 exogenous shock has created an immediate and sizable cash outflow,” it said.

“We estimate that up to half of Virgin Australia’s operating costs are fixed and that a reduction in variable costs will not offset the collapse in revenue.”

S&P said the benefit provided by forward bookings and the Velocity Frequent Flyer business was now likely to partially unwind.

“As a consequence, Virgin Australia’s previous $900 million unrestricted cash buffer is likely to materially reduce in the very near term,” it said.

A “default or distressed exchange appears increasingly likely over the next 12 months, absent timely government, or other support, and/or a swift reversal of the COVID-19 outbreak”.

Fitch Ratings is a little more optimistic in its outlook on Virgin, taking into account the government’s support package so far.

But, on Friday Fitch also argued Virgin’s “liquidity could come under pressure quicker than we previously anticipated”.

It said the company would “experience significant working capital outflows for the remainder of FY20 as customers seek refunds and forward bookings fall significantly, alongside cash outflows for aircraft rent, staff costs and other charges”.

“Should the travel restrictions remain in place and demand remain subdued for longer than we currently envisage, and if additional funding is not secured over the next few months, this would lead to further negative rating action,” it added.