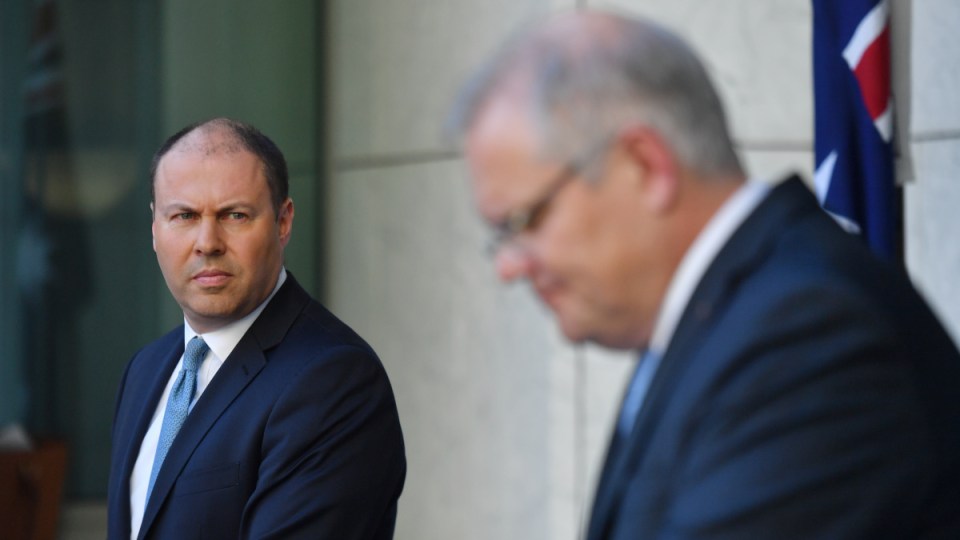 Treasurer Josh Frydenberg said on Monday the government had been working on the jobs subsidy for some time. Photo: AAP

On Sunday night, the Prime Minister ended a news conference saying he was not going to respond to what the Labor Party was saying.

On Monday, he did just that and some more – and the nation is better off for it.

Just last Friday Finance Minister Mathias Cormann ruled out the very idea – and in that he was lockstep with the Prime Minister and Treasurer, who had been dismissing it for weeks.

On Monday morning, Josh Frydenberg claimed the government had been working on that scheme for a while.

If he was telling the truth, then he and his colleagues had been misleading us all.

More likely it’s a bit of face saving and further evidence that, faced with a crisis of this size and speed, any government would be flying by the seat of its pants.

We shouldn’t be surprised that in our democratic system of contest parliamentary governance, Morrison and his merry band – or I should say band struggling to have anything to be merry about – were also playing politics.

It is ingrained in our version of the Westminster system that governments and oppositions are always trying to get one up on each other to impress the voters.

Before the lethal COVID-19 bug began spreading worldwide, the one-upmanship in Australia had degenerated into mindless tribalism.

Anything the other “mob” put up was, by definition, hopeless.

Such a paradigm could not survive a situation as grim as we are all in now.

We are still seeing competition and we are seeing different world views being applied to the urgent search for remedies to this health-induced economic collapse.

Morrison admitted as he began detailing the JobKeeper package that for some it would be “too little” and for others “too much”.

In itself, this is an admission the government is taking a calculated risk.

In its own ranks there is acceptance of this caution, but its political opponents in the Labor Party have been saying for weeks now this is not good enough.

Precious time has been lost.

Our response to the coming announcement on wage subsidies. It needs to be for all workers, employers big and small & generous so we can save jobs #COVID19Aus pic.twitter.com/SpoVmE2ZD0

Lessons from the coronavirus outbreak in China, Asia and Europe have taken too long to sink in if the thousands of sacked workers who queued outside Centrelink offices last week are any guide, not to mention the slowness to respond to quarantine and border issues.

Australia was given a three-week start, and the opposition, business groups and the unions have not been unpatriotic in pointing this out.

Nor has the call for more urgency been petty nit-picking.

As we’ve seen from the first two responses from the government, the sheer amount of money – $70 billion – doesn’t mean they’ve got it right.

This latest mega amount is directed squarely at the heart of the calamity.

Even so Jim Stanford, an economist advising the ACTU, says it will probably see the budget plunge at least $100 billion into the red and – at $1500 a fortnight – won’t save enough of the six million workers it is aimed at.

And if the govt lowballs the eventual subsidy (capping it too low, and/or – unbelievably – excluding part-timers), then they will squander so many of its potential benefits. https://t.co/DMtQWvLg5l

Morrison, who didn’t include Labor leader Anthony Albanese in his national coronavirus cabinet, says he is now consulting the opposition’s key people to expedite passage of the legislation needed through an emergency session of parliament.

But if we really are “at war” with this virus, as Morrison told 60 Minutes, wouldn’t it have been better for  the Prime Minister to emulate the country’s leaders in World War II and set up an across the Parliament Advisory War Council giving the opposition a bigger earlier say?

There’s no doubt a lot of time would have been saved.