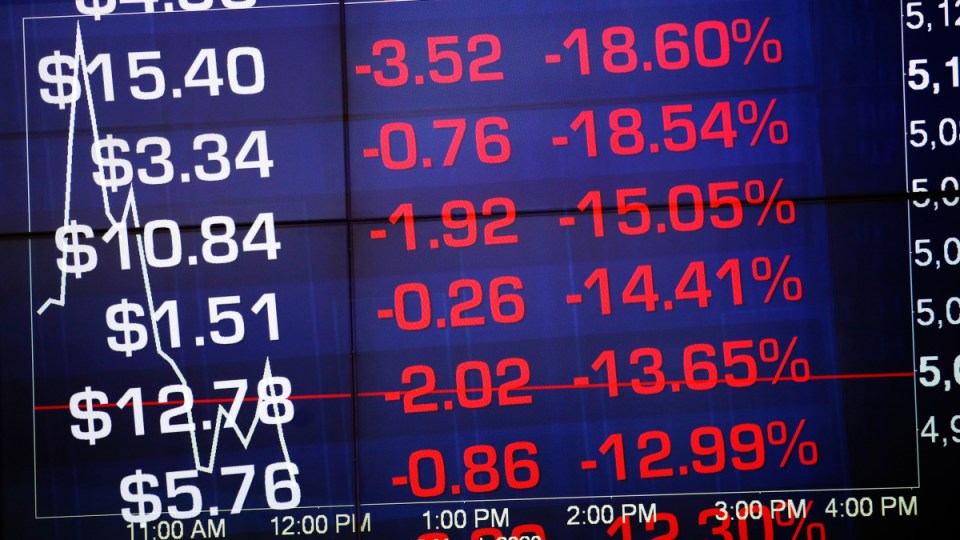 Australian shares down more than 7 per cent in the first 20 minutes of trade. Photo: Getty

Australian shares plunged further at midday AEDT as the Federal Government ordered large parts of Australia’s economy to shut down.

More than $100 billion was wiped off the value of shares as some states closed their borders and a coronavirus stimulus bill stalled in the US Congress.

It later came off those lows in a very volatile day of trade.

The Australian dollar fell further against the greenback to be trading at around 57 US cents, near a 17-year low.

The Reserve Bank said it planned to buy another $4 billion in government bonds.

That follows a $5 billion purchase of bonds on Friday in its biggest intervention in Australia’s financial system in history.

The banking regulator, the Australian Prudential Regulation Authority, will soon announce plans to reduce the regulatory burden faced by financial institutions in the wake of the coronavirus.

The news comes a little over a year since the final report of the banking royal commission was released, which clamped down on bad behaviour by financial institutions.

The Council for Financial Regulators said it had discussed the need for continued “close engagement” and contingency plans with international regulators.

CMC Markets chief markets strategist for Asia Pacific, Michael McCarthy, said investors were increasingly pessimistic about the economic outlook and were expecting a recession globally and in Australia, especially as the US Senate failed to advance a coronavirus stimulus bill.

“The lack of political will in a crisis is really disappointing investors,” he said.

However, negotiations are ongoing, and US President Donald Trump said Congress was close to reaching an agreement.

On the local market, banks and industrial stocks led the falls.

The big banks plunged to multi-year lows, with National Australia Bank back at levels not seen since 1996 at one point this morning.

Financial company Challenger dropped by nearly one fifth to $3.08 after the Federal Government said people in financial difficulty because of the coronavirus could access their superannuation early.

And retail firms like Premier Investments also took a hit. Its shares lost one quarter of their value to $9.01.

Flight Centre brought forward plans to close 100 underperforming stores and its senior executives will take a 50 per cent pay cut.

US stocks futures fell by nearly 4 per cent in opening trade in Asia, suggesting another fall on Wall Street tonight.

In China, the Shanghai Composite index lost 2.3 per cent and the Hang Seng in Hong Kong declined 4.4 per cent.

In New Zealand, the benchmark NZ50 index lost 10.2 per cent to 8258 after the country’s government announced a shutdown to try and stop the spread of the coronavirus.

It has been the index’s biggest single-day percentage fall on record.

Global credit ratings agency Standard & Poor’s (S&P) estimated total and permanent losses in Asia because of the coronavirus stood at $US620 billion ($1.08 trillion) for governments, companies, banks and households.

Last week it said the global economy was already in recession.

S&P predicted Australia’s economy would expand by just 0.4 per cent in 2020 after growth of 2.2 per cent last year seasonally adjusted according to the Bureau of Statistics.

It said China’s growth rate could halve this year to 2.9 per cent.

The agency forecast the Hong Kong, Singaporean, South Korean and Japanese economies would go backwards in 2020.