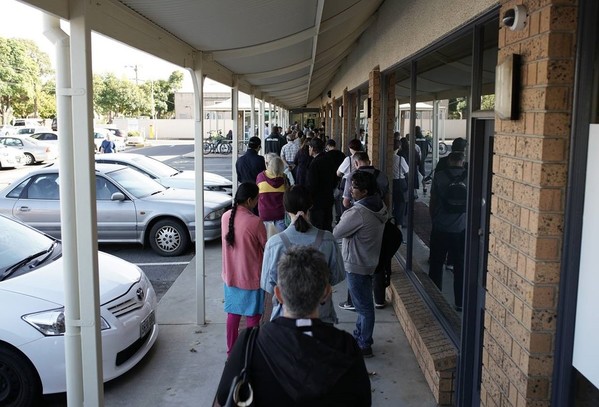 Hundreds of thousands of Australians have lost their jobs since the coronavirus hit in March. Photo: ABC

Scott Morrison has warned Australia that, for many, this will be “the toughest year of their lives” and called on the nation to summon the spirit of the Anzacs and citizens who endured the 1930s Depression.

As long queues spilled out of Centrelink offices around the country and the Australian sharemarket plunged more than 8 per cent in early trade on Monday, the Prime Minister addressed a near empty Parliament.

“Life is changing in Australia for every Australian and life is going to continue to change,” he said.

“For many, young and old, 2020 will be the toughest year of our lives.

“We gather today at a time of great challenge for our nation and indeed the world. We are a strong nation and a strong people but in the months ahead this will put us all to the test. At no time like this, since World War II. But together, Australia, we are up to this challenge.

“We summon the spirit of the Anzacs, of our great Depression generation, of those who built the Snowy, of those who won the great peace of World War II and defended Australia. That is our legacy that we draw on at this time.”

Mr Morrison said the decision to double payments for the unemployed (announced on Sunday in the government’s second coronavirus stimulus package) was designed to help families who face a desperate year. The MyGov website also crashed under enormous demand on Monday.

“Across Australia today, many thousands of Australians will lose their jobs,” he said.

“They are lining up at Centrelink offices as we speak – something unimaginable on this scale only weeks ago. They have lost their jobs, and we know many more will. This is the biggest economic shock our nation has faced in generations. Australia, long an open trading nation, is now closed off largely from the world.”

“This will be a test of all Australians. It is a test of our nation. Of our spirit. There are some who believe Liberal democracies and free societies cannot cope with these sorts of challenges. We will prove them wrong here in Australia.”

Mr Morrison said the challenge ahead was bigger than politics, prime ministers, captains of industry and leaders of union movements.

“I want to thank all of those who have come to this great challenge with such a unity of spirit,” he said.

“It requires every single Australian to do their duty as public citizens,” he said.

The Prime Minister warned Monday’s shutdowns of pubs, restaurants, churches and other businesses deemed non-essential could be extended and could be lengthy.

“Australians will be living with this virus for at least the next six months. It could be longer,” he said.

“There is no short-term solution to this. We have to steel ourselves for the next six months and work together to slow the spread.”

Mr Morrison said it was not business as usual and Australians needed to adjust to the new reality.

“No more sitting down at a cafe for lunch. These changes are vital to slow the spread of this virus. As the virus spreads – and it will – governments around Australia will not be complacent and may need, and are likely to need, to impose further restrictions on our daily lives.”

The Prime Minister said he was praying and urged other Australians to do the same.

“While you may not be able to go to church, the synagogue, the temple or the mosque, I most certainly call on all people of faith in our nation to pray,” he said.

“I can assure you, my prayer knees are getting a good work out. As Australia works to flatten the curve and slow this virus, we also face an immense economic challenge.”

Labor leader Anthony Albanese said the ALP had concerns about the Coalition’s plans to allow workers to access their super. But it would not stand in the way of the stimulus package to ensure workers got the help they needed as soon as possible.

“Selling your super at the bottom of the market will risk squandering people’s hard-earned retirement savings,” he said.

“It is also the case if the superannuation industry is forced to sell assets at the bottom of the market. That also is not sensible economics.

“We have been as supportive as possible and we will not be moving amendments – where there is any doubt, we will give the benefit to the government. We are not looking for arguments, we are looking for solutions.”