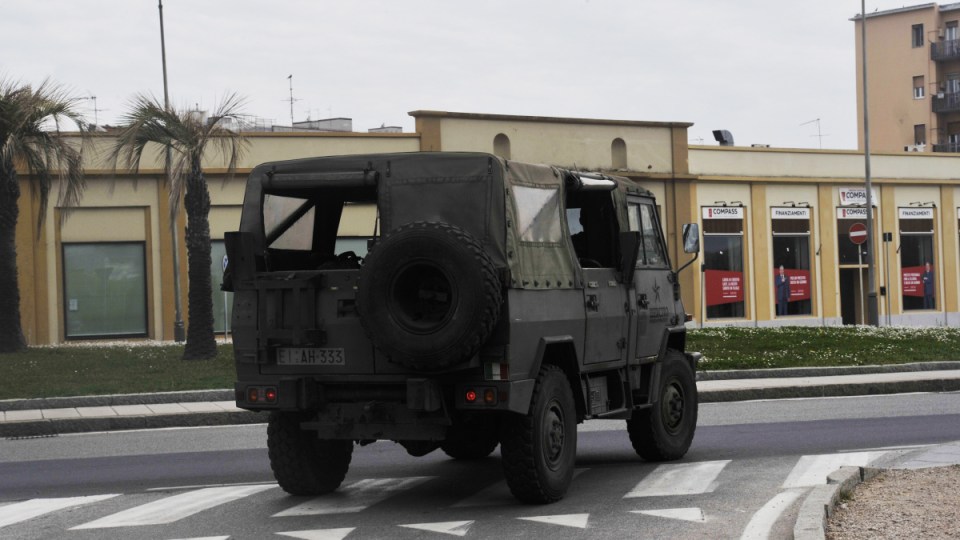 A military vehicle patrols the streets in a deserted town in Livorno, Photo: Getty

Italy has introduced draconian restrictions on public life in an increasingly desperate effort to halt coronavirus infections after the death toll jumped by 627 in a single day.

The jump in the toll is by far the world’s largest daily rise in absolute terms since the contagion emerged a month ago.

The latest crackdown effectively bans jogging and bicycle rides, the only types of outdoor exercise that were allowed.

“We already have many hundreds of dead. What more is needed before people understand the tragedy we are facing?” said Sergio Venturi, head of the coronavirus response team in Emilia-Romagna.

Italy overtook China on Thursday as the country to register the most deaths from the respiratory disease.

“Maybe the peak won’t come next week, but the week after,” the agency’s chief, Angelo Borrelli, told Rai radio.

The mayor of the most badly affected city, Bergamo in the affluent northern region of Lombardy, said the true number of fatalities from the pandemic in his area was four times higher than official reports were indicating.

“Many of the elderly are dying in their houses or in old people’s homes, without anyone testing them either before or after they die,” Giorgio Gori told the Huffington Post.

He added that a dozen mayors of other cities had confirmed the same thing to him.

The government has now agreed that the military can be used to help enforce the lockdown, the president of the Lombardy region, Attilio Fontana, told a news conference on Friday.

Responding to requests by the governors of the worst-hit regions, the national government in Rome said that from Saturday all parks would be closed and people could only take exercise around their homes.

“We have to do even more to contain the infections. Correct behaviour from everyone is essential to win this battle,” Health Minister Roberto Speranza said.

Authorities have become frustrated in recent days to see people still out and about despite their appeals to stay indoors for all but absolutely essential needs.

Lombardy, at the epicentre of the epidemic, said that about 100 soldiers would soon be deployed to help local police enforce the lockdown, and called on the national government to impose new measures to make sure Italians stay at home.

Officials are especially worried by the situation in Milan, Lombardy’s capital and Italy’s second city.

The country’s largest cities had so far been relatively lightly hit by the outbreak, but there are now 3,804 people infected in Milan, its financial hub, and the surrounding hinterland.

The number of new cases in and around Milan rose by 526, or 16 per cent, the largest daily increase for any region within Lombardy.

NEW: 17 doctors die of coronavirus in Italy, 3,654 medical staff there infected- from CNN’s Livia Borghese in Rome. The bravery and dedication of medical staff is astounding.

The Rome government last week ordered restaurants, bars and most shops to shut down nationwide until March 25.

In addition, it shut schools and universities and told everyone to stay at home for all but crucial reasons until April 3.