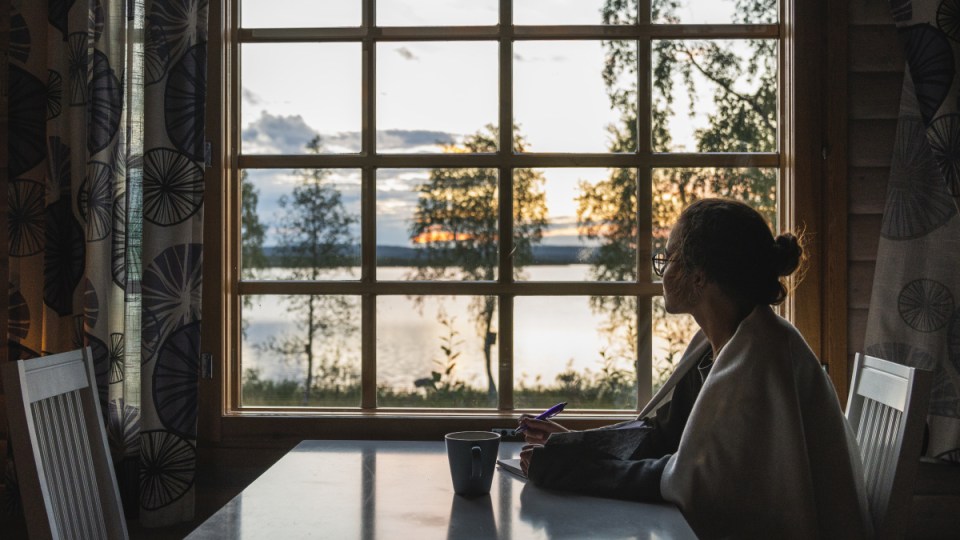 We're all starting to spend a lot more time with ourselves, and it's made me think. Photo: Getty
opinion

I am two days into solo self-isolation, and I am going out of my tiny little brain.

I discovered last year I am an extrovert. My best friend – a psychologist – snorted when I told her I’d only just worked this out. I thrive on having a calendar chock full of social engagements where I can swill wine with my friends, throw my arms around them and speak utter dross for hours on end. I always, always feel connected. The pub is my spiritual home.

So solo isolation is not working out well. I’m cooking meals for myself and I’ve discovered it’s hair-tearingly boring. Cooking is only fun when it’s shared: if you cook a good meal and another soul doesn’t get to appreciate it, did it actually happen? I guess that’s the question Instagram has been answering since it began.

Even though it hasn’t been long since I started flying solo I’ve been oddly emotional. Obviously the constant stream of doomsday news isn’t helping. The internet – that singular tool for telling ourselves we’re connected – is only serving to add to the turmoil. Waves of sadness and emptiness and disconnection roll and crash throughout the interminably long days.

But I pull myself out by reminding myself that this is (hopefully) temporary, and maybe this spell will be good for me. I might finally do some of the chores that have been on my to-do list for the past decade. Like get on that ancestry website and see if I have some wildly fascinating heritage. Or go online and do that thing where you try and find your missing superannuation.

The only time I’m really allowing myself out of the house is taking walks around the park. Yesterday I saw a man in his 80s doing a slow shuffling jog and I instantly burst into tears. Standing next to the empty football fields I was overcome by the realisation that this sense of loneliness I’ve felt for all of five minutes is something so many in our ageing community experience on a daily basis.

And it’s not just the elderly. There are young widows and bullied teens and people with crippling anxiety and folks working remotely who battle loneliness on a daily basis.

Hell, you don’t have to be part of a certain subgroup. There was this guy who lived by himself in the building where I used to live in Sydney. Coming and going, he was always there, determined to grab me for a chat. And, of course, I’d avoid him – duck out a different way, keep my head down, sneak away – because I thought he was odd (and I was usually rushing off to hang with my gang). But now I think about how obviously lonely he was, how little he was asking for, and I feel absolutely gutted.

Social isolation and loneliness are a huge problem in Australia. The impact it has on both mental and physical health is well documented. In fact, it’s been identified as a “significant public health and wellbeing” issue.

Me @ the Group FaceTime party during quarantine
pic.twitter.com/g8v2j47qEK

So a silver lining? Thankfully, in this unusual time, people are stepping up their game to check on one another. Group Skype calls are being organised.

My mate organised a virtual disco where people could dance “together” in their loungerooms. People are baking banana muffins to drop on neighbour’s doorsteps (in this oddly resourceful time people are finally using those brown bananas in the back of the freezer … aren’t *they* having a moment?)

lots of grim stuff out there but there's never been a better time to be a black banana in a freezer. black bananas in freezers are actually going to get USED in BAKING this month instead of thrown out in a year and it's their TIME to SHINE

All this is a beautiful thing. How heartening that when there’s a crisis, we step up.

But what about when social isolation is no longer a hot topic? What about the people for whom loneliness is their everyday reality? My fear is we’ll just go back to business as usual. That period where we nearly gave ourselves an aneurism stifling a sneeze on a packed train and genuinely washed our hands (instead of just turning on the tap so people didn’t think we’re gross) will just become the stuff of nostalgic anecdotes.

So I am making this deal with whichever deity is currently drunk at the wheel: on the other side of this whole thing, when physical distancing is a lonely memory, I’ll do regular volunteer work with The Red Cross companionship and social support program.

Glad you asked. Basically they pair you with someone in the community who is lonely and socially isolated. You visit for a cup of tea, go on an outing, chat on the phone, or go for a walk. It’s for older people who have few social connections, people with a disability, or people recovering from mental illness.

I mean, look at the photo they use to illustrate the program. The stuffed toys in the cabinet. The joy on the face of the lady with the nice beaded necklace. Stick a fork in me, I’m done.

I am not announcing this to make myself look like a top sort. I’m writing it here because it’s the kind of promise I’ll make in my head, and when the pub is open again I’ll dance off gaily into the sunshine and forget the deal I made. Writing it in public makes me accountable.

I’ve had but the tiniest taste of loneliness, and the impact leaves me breathless. How lucky that when we come out the other side, most of us will have people to reconnect with.

Not everybody is that lucky. And now, more than ever, that breaks my heart.

Coronavirus outbreak: Let’s spare a thought for the permanently lonely