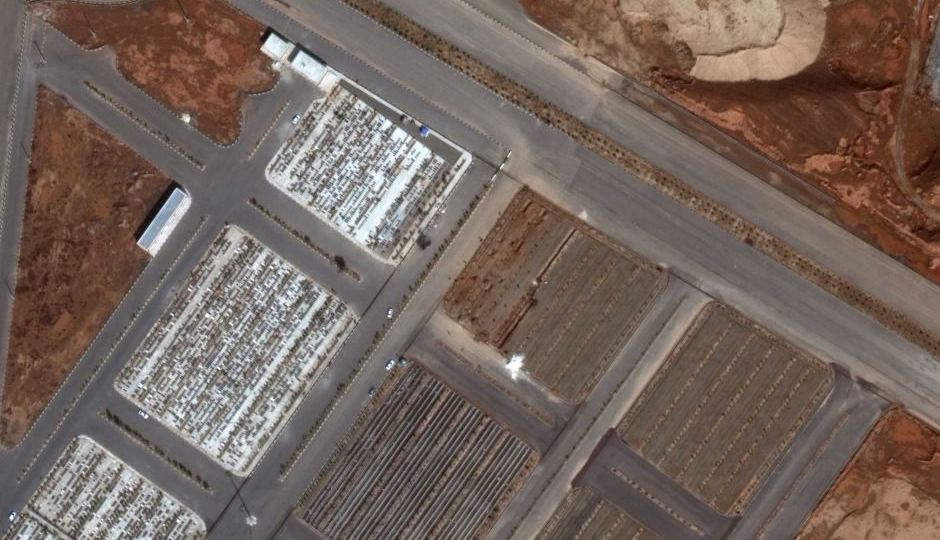 Satellite images appear to show evidence of mass burial pits in Iran to accommodate a growing number of deaths from the coronavirus outbreak, as experts question Iran’s official death toll.

A series of images showing the excavation of a new section of graveyard in the city of Qom — the epicentre of Iran’s COVID-19 outbreak — that began around February 21, just two days after Iran reported its first cases of coronavirus, were first published by the New York Times.

The images, provided to The Times by US space technology company Maxar, show what appear to be new rows of graves within the city’s largest cemetery and increased activity around the new site.

We first discovered mass grave were being built in #Iran via satellite imagery and then tracked how Iran got to this boiling point with the #coronavirus. Watch our report here: https://t.co/G2buKynA1w and check out WaPo’s follow-up piece here: https://t.co/hZ8sFpGqXv 🛰📷@Maxar pic.twitter.com/3Ci63qHPQ5

Dalton Bennett, a reporter with The Washington Post’s investigative unit, tweeted that analysis from Maxar revealed “the size of the new trenches and the speed with which they were excavated together mark a clear departure from past burial practices involving individual and family plots at the site”.

The Iranian government have reported 429 deaths and 10,075 confirmed cases, but health officials inside Iran previously told the BBC that the true numbers were much higher than were being reported.

Among the dead are dozens of officials, including members of Parliament and a senior adviser to the Supreme Leader.

Civilians inside Iran, who did not want to be named, told the ABC the death toll was numbering in the thousands and hospitals were so full that other public buildings were being used to house those infected.

Between February 19 and 23, Iran reported 43 cases and eight deaths from the virus, but during the same period three exported cases originating in Iran were identified.

‘We do not trust the official statistics’

A report published on health sciences website medRxiv — titled Estimation of COVID-2019 Burden and Potential for International Dissemination of Infection from Iran — estimated that by February 23, “18,300 COVID-19 cases would have had to occur in Iran, assuming an outbreak duration of 1.5 months in the country, in order to observe these three internationally exported cases reported at the time of writing”.

Kaveh Taheri, a Turkey-based researcher, investigative journalist and chairman at the Institute of Capacity Building for Human Rights, said: “Based on grassroots reports received from the country, I am convinced that the estimates would be very close to reality and we do not trust the official statistics.”

“Iranians inside the country are extremely frightened,” he said.

“You cannot imagine how desperate the people are.”

Videos have also been shared on social media showing body bags lined up in a morgue, grave sites and people passed out in the street.

One video shows multiple motionless bodies laid out across a morgue floor.

According to Iranian state media, the person who released the footage was subsequently arrested by local authorities.

A deputy prosecutor in Qom cited by Fars News said the publication of false or unauthorised images about the virus was prohibited.