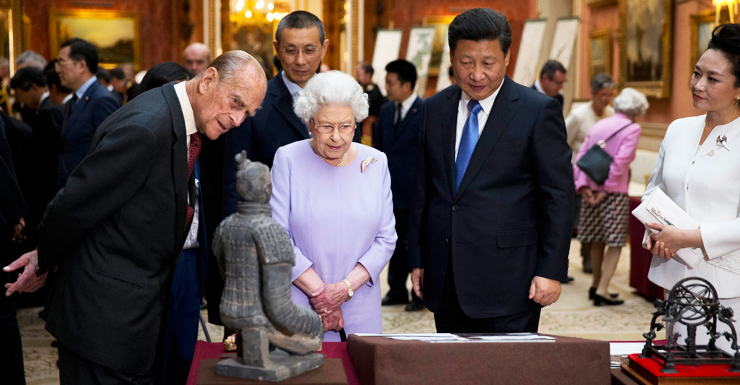 China’s mysterious leader, President Xi Jinping, has been given a royal welcome to Britain.

At the beginning of his four-day visit, he rode past protestors in a gilded carriage to Buckingham Palace with Queen Elizabeth II.

Thousands of supporters cheered and waved Chinese flags on Wednesday (AEDT) as the elaborate procession rode past, while around 200 campaigners booed and waved placards attacking China’s human rights record, especially in Tibet.

Unlike Britain’s monarch, the Chinese leader, 62, is not well known.

President Xi’s father both helped and hindered his rise to power, according to the BBC.

The elder Xi helped founded the Chinese communist party, but was imprisoned during a purge in the 1960s, which counted as a black mark against the family name.

Born in Beijing in 1953, Xi Jinping graduated in chemical engineering from a university in the same city.

After failed attempts, which the BBC attributed to his father’s imprisonment, Xi began his rise to climb party ranks in the 1970s.

He was appointed party chief of Shanghai in 2007 and then vice-president of China in 2008.

In 2013, he was appointed President, making him the nation’s official leader.

President Xi is reportedly anti-corruption, pro-business and opposed to ‘big government’, but his administration has become increasingly belligerent.

Under Xi’s leadership, China has continued its cyber war on the US and other Western powers. And it has more aggressively asserted its claim to disputed resource-rich territories in the South China Sea — much to the annoyance of rival claimants Vietnam, Malaysia, Taiwan, Brunei and the Philippines.

In President Xi’s third year in power, China signed a much-anticipated free trade agreement with Australia, which is yet to be approved by the Australian parliament. To celebrate the deal, he made a state visit to Australia in late 2014.

On Wednesday, the president told the UK parliament he would lift relations between Britain and China to a “new height”.

In a sign of increasingly close business ties, the People’s Bank of China on Tuesday launched a yuan-denominated bond in London for the first time as it seeks to internationalise its currency.

Unvaccinated Pauline Hanson has COVID
‘Should have been a penalty’: Boy crash-tackled by PM gives his verdict
Amber Heard’s sister and friend give evidence
Russian Google to file for bankruptcy
Man arrested at NSW school for bestiality
Concern about COVID-19 deaths in aged care
The financial system overhaul explained
Today's Stories