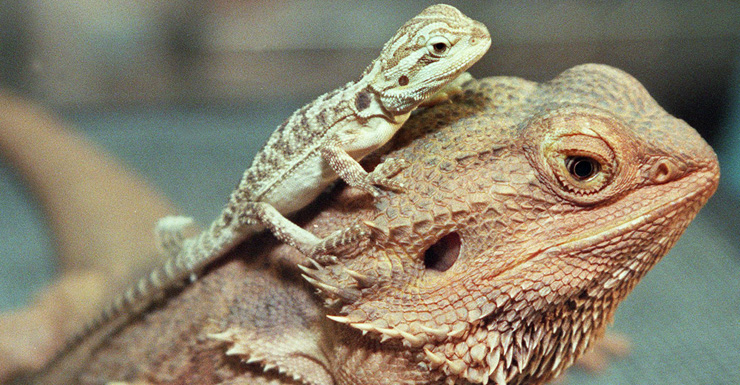 Bearded dragon lizards that are genetically male have been hatching as females, even giving birth to other lizards, because of the heat.

A new study has found the way the lizards’ gender is determined is getting changed so much that the female sex chromosome may eventually disappear entirely, say the authors of the Australian study.

“This is the first time we have proved that sex reversal happens in the wild in any reptile at all,” said Clare Holleley of the University of Canberra, lead author of the study in the journal Nature on Wednesday.

• Forget sharks. These are the deadliest animals
• Ethical eggs – why these are the brands to buy
• African-American ballerina makes history

The study, she said, “is showing that climate extremes can very rapidly fundamentally alter the biology of an organism.”

Some reptiles, like alligators and some turtles, have their genders determined not by sex chromosomes, like humans and other mammals, but by temperature during incubation.

Until now, bearded dragons had their gender based on chromosomes.

Like birds, their sex chromosomes are Z and W instead of X and Y. Males are ZZ. Females are ZW. In bearded dragons, everyone has a Z and the presence of a W makes them a genetic female.

In the past, scientists have shown in the lab that hot temperatures can switch that natural chromosome-based gender.

Holleley and colleagues examined the genetic sex markers of 131 wild-caught bearded dragons in Queensland and found that 11 of them were female outwardly — even having offspring — but had the ZZ chromosomes of a genetic male.

Their sex determination was “switched into overdrive,” Holleley said.

The genetic-male-into-female dragons not only laid eggs, but in a way were better mothers than genetically determined females, laying more eggs, said study co-author Arthur Georges, chief scientist for the Institute for Applied Ecology at the University of Canberra.

The team also found that the offspring of these dragons no longer have their gender determined by chromosomes, but by temperature.

This is happening in an area that is one of the fastest warming places in Australia over the past 40 years, Holleley said.