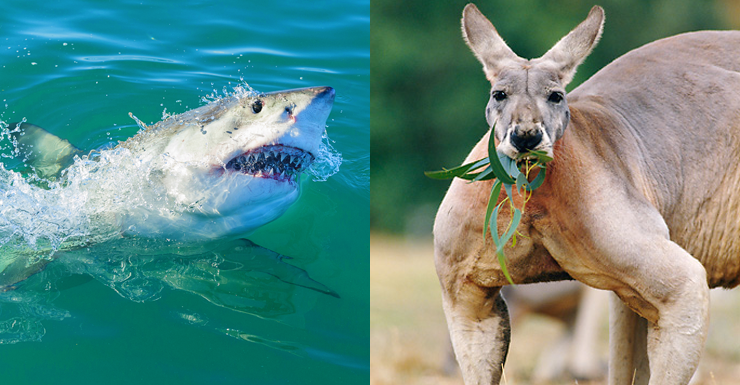 Australia is a land of deadly beasts.

These animals can be lethal, and some do kill, but it seems the real enemies are fluffy and cute, munch on grass and buzz innocuously around our gardens.

• Watch this rabbit hop an avalanche like it’s nothing
• Huge kangaroo rivals Arnold Schwarzneggar
• What a way to go! Marsupial shags himself to death
• This is the best way to kill a cane toad

Between 2001 and 2007, an average of 30 people died in Australia each year in animal-related incidents. The usual suspects — sharks, snakes and spiders — appeared surprisingly far down the list of culprits, the national coronial database (NCIS) reveals.

The deadliest were in fact farmyard animals, like horses and cows.

Even our national emblem, skippy the bush kangaroo, is a killer. He ranked as fourth deadliest on the list.

The reason this rap sheet of homicides is so at odds with our nightmares is that we don’t ride snakes, pat spiders or drive on highways frequented by giant, leaping sharks.

After reading this, it is doubtful you will suffer heart palpitations at the thought of visiting a barn. The desert, the ocean and the dark gloom of your backyard shed are still far scarier.

But perhaps you should be very, very afraid of farms. And roads.

“Public roads, the home and farms were the most frequent locations at which these deaths occurred,” the NCIS noted in a statement.

“When examining the types of injuries sustained, nearly 40 fatalities involved a transport incident with horses, cows or kangaroos.”

Perhaps travelling without an epinephrine injector (EpiPen) should also strike fear into our hearts.

“All deaths involving bees and ticks related to anaphylaxis,” the NCIS statement said.

In the US, the big killers were equally surprising.

Alligators, spiders and snakes rate a mention, but the deaths they cause are far, far fewer than their cuter cousins, the Washington Post reported.

With that in mind, here are Australia’s most dangerous animals.

Forget sharks. These are the deadliest animals