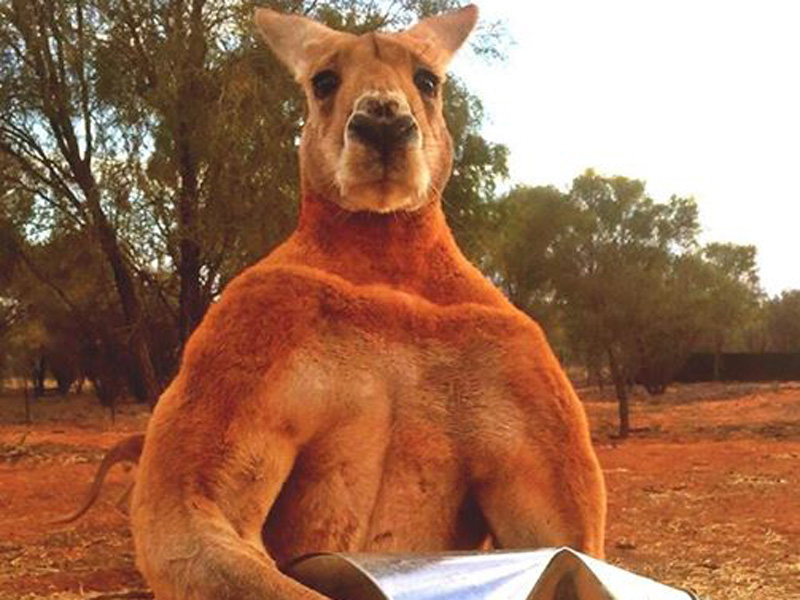 Roger the red kangaroo is fiercely protective of his females and crushes metal buckets for fun.

The muscly dude was recently introduced to Australia by The Kangaroo Sanctuary in Alice Springs, shocking the nation with his bodybuilder physique.

His caretakers claim he can destroy a bucket with the force of his biceps, and counts “kickboxing” as one of his hobbies.

Roger was hand-reared by the sanctuary from when he was only a “tiny joey”. He now stands at a towering two metres (6 foot 7 inches) — a full 22 centimetres taller than bodybuilding champion Arnold Schwarzeneggar. All that muscle weighs in at 89 kilograms.

Some have doubted the authenticity of the photo, but it seems Mr Roo’s muscles are true blue.

“Most [red kangaroo] males grow like this,” the sanctuary said online.

“It takes quite a few years and good feed to grow very large.”

So huge is the kangaroo that the sanctuary boasted on Facebook that he could compete in the bodybuilding competition made famous by Mr Schwarzeneggar.

Don’t even think about messing with this bad boy