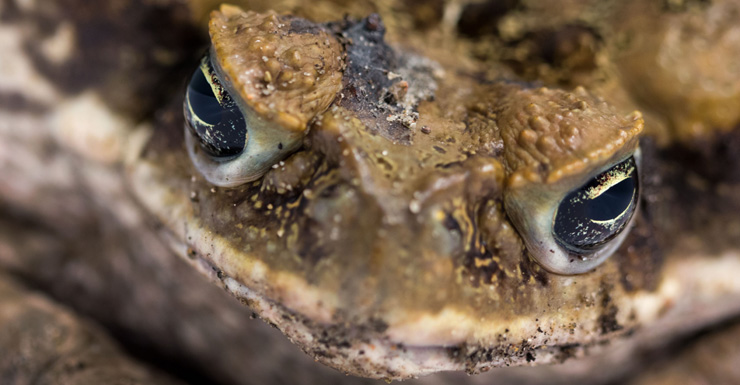 They’re greeny-yellow, warty and nobody loves them except maybe their mums.

Cane toads are also about the only thing you’re encouraged to kill on sight, but until now the most painless way of ending the pest’s life was unclear.

“We need to offer a humane death to the toads – it’s not their fault they were brought to Australia 80 years ago – but until now nobody has been sure how to do it,” said University of Sydney biologist Professor Rick Shine in a statement.

Ending a toad’s life slowly in the freezer is the best, the study published on Tuesday in the journal Biology Open found.

But this method has been outlawed nationally and internationally by animal ethics committees as inhumane, the study’s lead author said.

His team measured pain responses in toads while they were placed in a refrigerator for a few hours, then transferred to a freezer. They found no evidence of pain as they slipped into unconsciousness and froze.

“This procedure was a widespread method for humanely killing amphibians and reptiles for many years until about 20 years ago, but animal ethics committees decided it was inhumane because the animals’ toes might freeze while their brains were still warm enough to detect pain,” Professor Shine said.

“However, our work shows that in cane toads at least, the toad just drifts off into torpor as it cools down, and its brain is no longer functioning by the time its body begins to freeze.”

The pest was imported from South America in the 1940s to help sugar cane farmers eradicate an unwanted beetle destroying their crops.

The toad species, known to scientists as Bufo Marinus, has spread across the top of Australia. Their numbers are highest in the Kimberley region of Western Australia, the Darwin region of the Northern Territory, and coastal Queensland.

Hitting them on the head with a hammer — the legal and recommended method — is both dangerous and potentially painful, Professor Shine said.

“A slight misjudgement may result in severe pain for the toad, and a splash of toxic poison up into the hammer-wielder’s eyes.”

Experts generally use chemicals to kill the toads, but these are not available to the general public.

“Popping toads into the fridge for a few hours to cool down then moving them to the freezer beside the ice cream is kinder and safer for everyone involved.”

Just be sure to acquaint yourself intimately with your intended target before going on a killing spree.

It is reportedly easy for toad hunters to accidentally destroy a native species of frog by mistake.

Scientists explain how to ‘humanely’ kill a cane toad