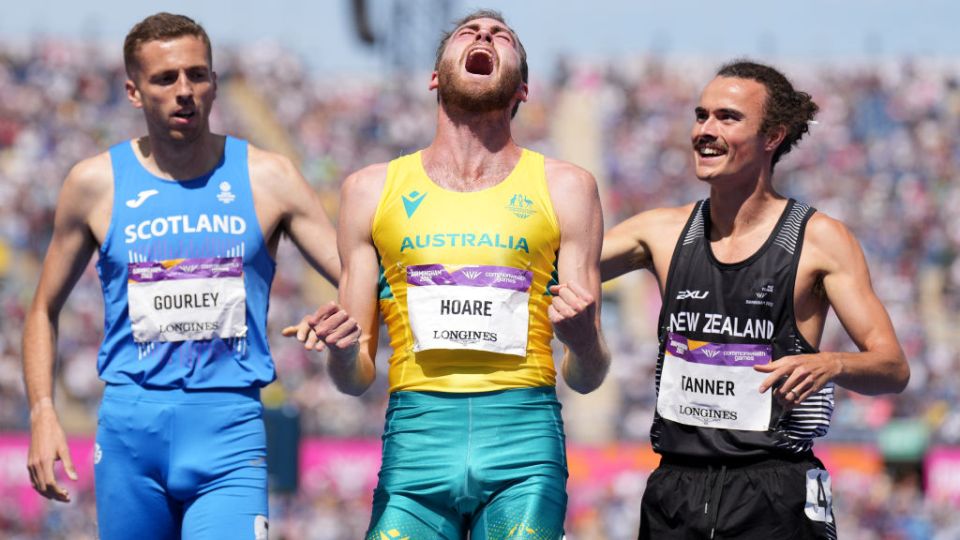 Ollie Hoare after powering to the finish line. Photo: Getty

Ollie Hoare has joined the legendary Herb Elliott as the only Australians to win the Commonwealth 1500m, overtaking two world champions in one of the greatest runs in the nation’s track history.

Hoare was fourth at the top of the final straight but powered home in the last 100m to win in three minutes 30.12 seconds, lunging across the line to edge out flagging 2019 world champ Timothy Cheruiyot from Kenya by nine hundredths of a second.

Reigning world champ Jake Wightman from Scotland was third as the first seven runners across the line broke the Games record.

It was a remarkable turnaround for Hoare, who only two weeks ago failed to earn a place in the final at the world championships.

“Not many Australians have been able to achieve medals (in the 1500m), let alone win it, so it’s an absolute privilege,” said the 25-year-old Hoare, who stripped more than two and a half seconds off his PB.

The incomparable Elliott won the mile at the 1958 Games in Cardiff before the switch to metric distances.

Hoare dedicated the race to his grandfather, Sergeant Fred Hoare, a WWII veteran who passed away last week.

“He was a big inspiration to me and my dad,” said Hoare.

“He always had the same stopwatch, it was about 100 years old and he would trust the timer, he would only go off the stopwatch, my PBs were all on his stopwatch.

“He was a great lover of the sport, a lover of Herb Elliott, (Steve) Moneghetti, (Robert) de Castella.

“After (I had) such a disappointing world championships, he passed away at 96.

“It kind of hit me, I hadn’t been home and was unable to attend his funeral two days ago.

“He’s up there having a glass of red wine, laughing his arse off and he’d be saying, ‘I knew you could do it mate but unfortunately I wasn’t around to see it’.”

Hoare’s victory was one of a a number of highlights for Australia on day nine in Birmingham, with lawn bowler Aaron Wilson celebrating gold by ripping off his shirt — again.

He famously rejoiced sans shirt after taking gold at the Gold Coast Commonwealth Games in 2018.

“I wish I had a better rig, but that’s life,” Wilson said, jumping for joy in shirtless style.

“That (body) has been well seasoned.”

Wilson trounced Northern Island’s Garry Kelly 21-3 in a Saturday’s singles final — if lawn bowls can be brutal, this was it.

Bryant won the last of his four successive titles in 1978.

The victories couldn’t have been more contrasting.

In what spectators were calling the greatest match they’d seen, Ryan and Krstic won a thrilling final with a 19-18 extra end win over England’s Amy Pharaoh and Sophie Tolchard at Royal Leamington Spa outside Birmingham.

It all came down to the final bowl, in the hand of Ryan.

With England holding the advantage in the extra end, Ryan — having earlier scattered the bowls with a drive — again went the direct route to knock out England’s bowl and hopes.

Jemima Montag drew on the remarkable memory of her late grandmother, a Holocaust survivor, as she won gold in the women’s 10,000m walk in Birmingham.

As she celebrated on the final lap, her bracelet clinked against her wrist and she could feel her late grandmother, a Holocaust survivor, with her.

The bracelet was grandmother Judith’s necklace that she had cut into three for Montag and her two sisters two years before she died.

When Montag was later sitting in hotel quarantine, she looked through love letters and old documents, translated by a Polish race walking friend.

With it, Montag learned the lengths her then-12-year-old grandmother took to survive.

“In some of her love letters and journal entries she wrote about just trying to make it through the next hour, the next day, just hoping to meet her dad at the gate with a piece of bread,” Montag said.

“You just had to have such a careful balance of taking risks and being a little cheeky when it was possible.

“Stealing scraps of food, running from one line to the other if it meant not being put to the gas chamber, and then sticking by the rules, when it was the right thing to do so.”

Montag was particularly touched by the story of one of the infamous Auschwitz death marches through snow and cold for days on end in  sandals little clothing.

“Just visualising her walking on ice, not knowing when her next meal would be or if she’d survive.

“This (race walking) is fun and this is something I choose to do and yes, it’s hard, but someone just two generations ago had that level of strength and I know it’s with me now.”

It was a tale of redemption when Australian divers Maddison Keeney and Anabelle Smith dives to gold in the women’s synchronised three metre springboard.

Four years ago at the Gold Coast Commonwealth Games, the pair entered as favourites and, with one dive remaining, were in the gold medal position.

But they spectacularly bombed on their last dive. It didn’t even score a point, they slipped from first to last, and exited the Gold Coast distraught.

Their performance in Birmingham was near faultess, leading from start to finish to win with 316.53 points.

“We have been diving together for eight years and there has been so many tough times over the years.

Smith, who partnered Keeney to a bronze medal in the event at the 2014 Glasgow Commonwealth Games, described the gold as reward for effort.

“Madi and I have been together for a long time but we had never won this Commonwealth Games gold medal,” she said.

But it wasn’t all glory stories at Alexander Stadium after a “frustrated and disappointed” Eleanor Patterson had to settle for a shock high jump silver.

A fortnight after winning a thrilling world title in Eugene, Patterson was the red-hot favourite to claim a second Commonwealth title in Birmingham.

The odds of a Patterson triumph shortened even further when fellow Australian and Tokyo Olympics silver medallist Nicola Olyslagers withdrew on the eve of the final after tearing a calf muscle in the qualifying round.

But no one reckoned on Lamara Distin.

The Jamaican blew the competition wide open with a first-round clearance at 1.95m.

Patterson was unable to respond, missing three times at 1.95m — seven centimetres less than her Australian record-equalling effort in Eugene.

The 26-year-old claimed silver on countback from another Jamaican, Kimberley Williamson, at 1.92m.

“I didn’t really show what I can do at all,” said Patterson.

“I was not jumping how I can and how I usually do and so it is just really frustating.”

Australia also suffered a major blow in the opening round of the men’s 4x100m relay when Rohan Browning fell flat on his face at the final changeover.

Australia was well placed to claim a spot in the final until 100m finalist Browning tumbled to the track before third-leg runner Jack Hale could get him the baton.

“I just tripped over; it’s never happened before,” said Browning.

“I know these boys have put in so much work for this relay and I take sole responsibility for that.

It was one of those freak things and I’m just gutted by it.”

Naa Anang anchored the women’s 4x100m relay team to third spot in their heat in 43.47 and a spot in Sunday’s final.

Finally, after a blistering start, table tennis player Yangzi Liu has missed out on becoming the first Australian woman to win a Commonwealth Games singles medal.

Still, though, her hopes of making a slice of sporting history are not all lost as she’ll tackle the bronze medal match against India’s Sreeja Akula on Sunday’s penultimate day of action.

Australia has only won one table tennis singles medal at the Games when William Henzell took silver in the men’s singles in Melbourne in 2006.

Boxers Kaye Scott and Callum Peters have produced exhilarating performances to punch their way into finals on a terrific morning for Australian boxing.

Australia’s Diamonds have exacted ruthless revenge on champions England as they powered into the netball final at the Commonwealth Games with a 60-51 win.

And the Hockeyroos know all of England will be against them in their gold medal stoush when they meet the Poms on home turf.

Once a Hollywood sweetheart, The Mummy’s Brendan Fraser is back in new heavyweight role
Taiwan: China’s intimidation offensive is a dry run for an invasion
Today's Stories