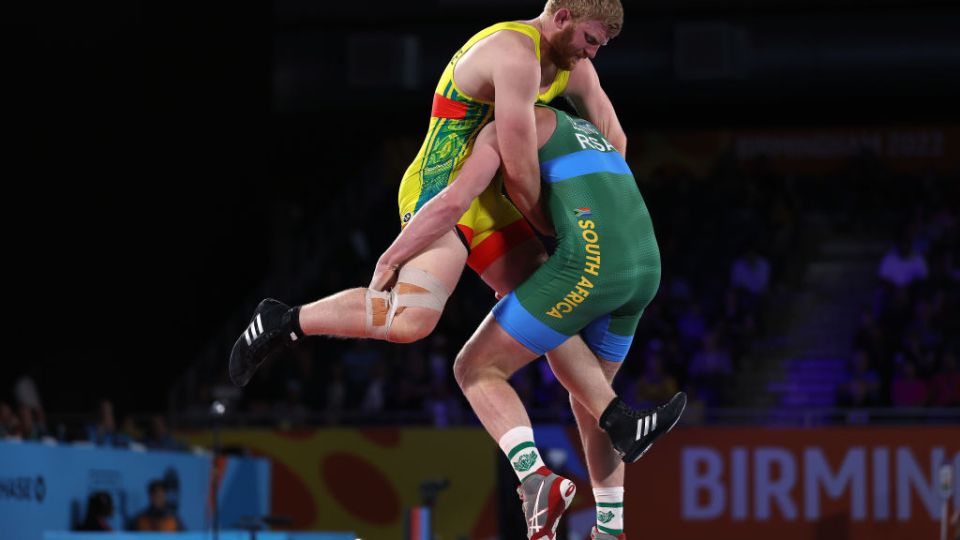 The 27-year-old had to hold on to his young South African opponent Edward Lessing’s leg for grim life in the denouement to the Friday’s bronze-medal bout in the 86kg freestyle event at the Coventry Arena simply to cling on to his 12-11 triumph.

After winning, Lawrence, in his third Games, lay exhausted on the mat, head in hands as he celebrated becoming the first Aussie male wrestler to win a Games medal since Delhi 2010 when Ivan Popov won gold in the men’s 120kg Greco Roman event.

Amazingly, he won the match despite having an injured knee after tearing an ACL.

“In five minutes I will not be able to walk,” he said.

Australia bagged a swag more medals on day eight in Birmingham with performances in the diving pool and gymnastics floor.

Aussie diver Brittany O’Brien surged her way into the silver medal of the women’s 1m springboard.

And Divers Sam Fricker and Shixin Li combined for a surprise bronze in the three-metre synchronised springboard final.

Catch up on all the action for the Commonwealth Games Australia Team from a busy Day 8 of @birminghamcg22! #BoldInGold https://t.co/JjiVEZ6YKe

It ends the prospect of a thrilling head-to-head battle with fellow Australian Eleanor Patterson.

The Tokyo Olympics silver medallist only needed one jump in Thursday’s qualifying round to book her spot in the final.

Afterwards, Olyslagers was diagnosed with the inury to her right calf muscle.

“It’s both disappointing and devastating not to be able to compete in the women’s high jump final,” the 25-year-old Olyslagers said in a statement.

“What was thought to be a tight calf after my qualifying round turned out to be a torn muscle in my jumping leg.

“Of all the emotions and shock I could feel in the moment, I still have peace.

“Winning bronze at the Commonwealth Games four years ago allowed my professional career as a high jumper to begin, it was a competition that changed the trajectory of my life.

“My prayer is that someone else’s dream comes alive tomorrow as I cheer them on from the sidelines.

“Let’s go cheer Eleanor on as she jumps for Australia so well out there.”

Newly minted world champion Patterson will now be the unbackable favourite to win a second Commonwealth title, having previously claimed gold as a teenager at the 2014 Glasgow Games.

First dividend hike for Telstra since 2015

Violence against children in sport rampant