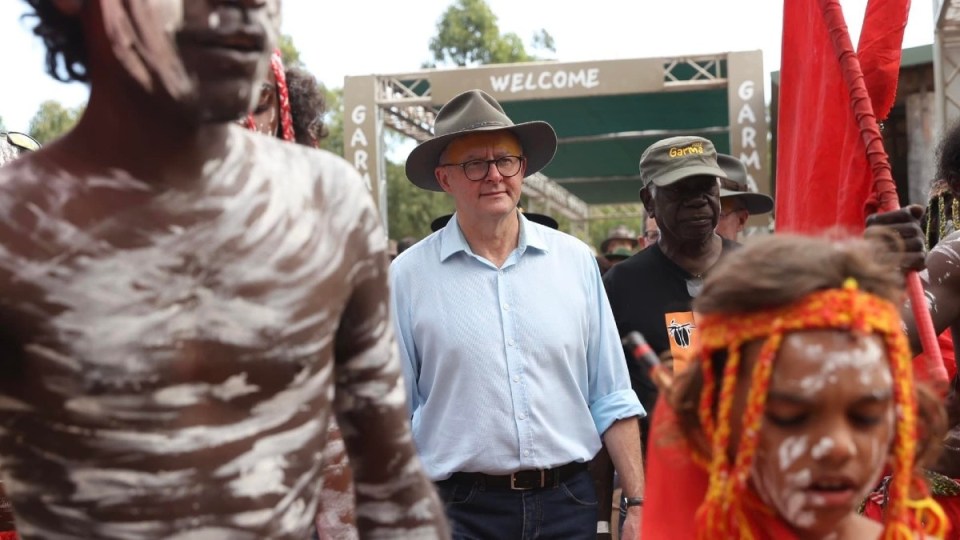 Prime Minister Anthony Albanese will unveil the question Australians could be asked in the country’s first referendum in 20 years aimed at enshrining an Indigenous voice in the constitution.

In his first significant address to Aboriginal communities, Mr Albanese will tell the Garma festival in Arnhem Land that his government is seeking “momentous” change — but “also a very simple one”.

This reform after “centuries of failure” would give First Nations people a voice in parliament — no matter who is in government — on issues that impact them.

Mr Albanese will say he wants the referendum to be held in this term of parliament and will seek support from all sides of politics and the community.

Only eight out of 44 Australian referendums have succeeded since 1901.

In a speech on Saturday, Mr Albanese will share the draft referendum question which asks: “Do you support an alteration to the constitution that establishes an Aboriginal and Torres Strait Islander Voice?”

This ‘Voice’ would take the form of an advisory body which would be enshrined in the constitution and “tell the government and the parliament the truth about what is working and what is not” in Indigenous affairs, Mr Albanese will say.

The advisory group would “tell the truth – with clarity, with conviction,” Mr Albanese will say, adding that “a Voice enshrined in the constitution cannot be silenced”.

Mr Albanese will also suggest the wording of three sentences that could be added to the constitution:

1.There shall be a body, to be called the Aboriginal and Torres Strait Islander Voice.

3.The parliament shall, subject to this constitution, have power to make laws with respect to the composition, functions, powers and procedures of the Aboriginal and Torres Strait Islander Voice.

The drafts are not final and will be open for consultation.

Mr Albanese will tell those at the Garma festival in the Northern Territory that the “tide is running our way” and “the country is ready” to make this reform.

“Friends. I believe the best way to seize the momentum is by settling — as soon as possible — on the referendum question that will be put to the people of Australia,” he will say.

“I ask all Australians of goodwill to engage on this. Respectfully, purposefully we are seeking to secure support for the question and the associated provisions in time for a successful referendum, in this term of parliament.”

But Mr Albanese will emphasise that the “long overdue” change does not mean Australia has to “choose between improving peoples’ lives and amending the constitution. We can do both – and we have to”.

Mr Albanese was given a hero’s welcome on Friday when he arrived at the festival at Gulkula, a significant ceremonial site overlooking the ocean from deep within a stringybark forest.

He was escorted into the celebration by traditional owners after a men’s gathering out of sight, where the prime minister’s forehead was painted yellow.

Dozens of Yolngu dancers then performed for the crowd before Yothu Yindi Foundation chair Galarrwuy Yunupingu presented Mr Albanese with a traditional didgeridoo.

The four-day gathering is a celebration of the Yolngu people’s cultural and ceremonial traditions, drawing about 2000 guests.

It also provides a platform for the government, corporate and non-profit sectors to engage with Indigenous people.

More than a thousand people have already arrived at the massive tent-covered site on the Gove Peninsula, where an outdoor cinema, cafe, library and music venue have been erected.

Minister for Indigenous Australians Linda Burney and Attorney-General Mark Dreyfus are also at the gathering, along with Senator Patrick Dodson, the Special Envoy for Reconciliation and the Implementation of the Uluru Statement, and US ambassador Caroline Kennedy.

An honour to meet with so many elders at Garma Festival, including with Gumatj leader Galarrwuy Yunupingu, and share in their wisdom on how we can take our country forward together. pic.twitter.com/wWrzqpCMO4

Wiradjuri man Geoff Scott said the opportunity for a voice had arrived and if missed it may not return for another generation.

“It has been something that’s been developing over 30 years and the time is right now for change,” Mr Scott told AAP at the festival on Friday.

“We are on the verge of something very monumental, and spectacular.”

Mr Scott said a Voice to parliament would help Indigenous people focus on closing the gap, and every Australian should want that.

“We do not want to lose another generation. That is what the Voice is about,” he said.

He acknowledged the federal government still had a lot of work to do before a referendum could happen.