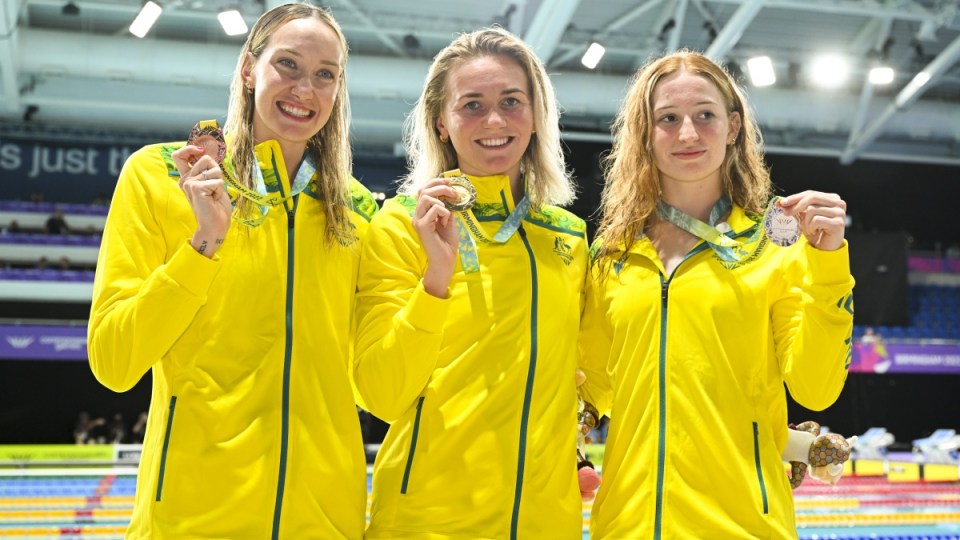 Australia has had a shining start to the Commonwealth Games with track cyclists winning our first three gold medals, followed by a stunning display in the pool.

Australia’s men’s sprint team and the women’s pursuit quartet both roared to record-breaking triumphs on Friday in London’s Olympic velodrome.

Just a month after recovering from COVID, Ariarne Titmus has triumphed in the women’s 200m freestyle in Birmingham.

And Elijah Winnington, after almost quitting the sport last year, saluted in the men’s 400m freestyle.

Winnington was victorious ahead of compatriots Sam Short and Mack Horton, who won silver and bronze respectively.

Winnington’s win continues his stirring swimming redemption — he almost gave up the sport after bombing at last year’s Tokyo Olympics when he entered as raging favourite but finished seventh.

The Queenslander admitted battling depression, feeling like a failure after Tokyo before seeking help from a psychologist and then a mindfulness coach.

After much introspection during months away from the pool, Winnington made a triumphant return to international competition at last month’s world championships in Budapest, winning gold in his pet event.

And now he has added the Commonwealth crown to his collection.
“It was really tough coming off the back of Toyko, I almost quit,” Winnington said.

“I decided to keep going and put myself and my mindset in the right spot to achieve what I have achieved this year.”

Winnington was on world record pace until fading somewhat in the last 100m. He clocked three minutes 43.06 seconds, some 3.01 off the world benchmark set in 2009 by German Paul Biedermann.

“It’s something to chase. It is pretty hard being the hunted but having that world record there means I’m still the hunter.”

Australia’s track cyclists have bulleted to our first three triumphs in London’s Olympic velodrome in a golden start to their Commonwealth Games campaign.

Australia’s men’s sprint team and the women’s pursuit quartet both had record-breaking triumphs on Friday.

It came after the remarkable Paralympian Jess Gallagher and her sighted pilot Caitlin Ward kicked off the gold digging at the scene of the 2012 Olympics by earning Australia’s very first gold of the Games in the tandem blind and visually impaired sprint.

Still, though, amid the flag-waving, there was a sense of frustration about the end of an era as Australia’s flagship men’s pursuit foursome failed to make the final at the Games for the first time ever.

They had to settle for a bronze, after winning the race for third against Wales, but a four-medal start at least ensured Australia were in pole position to dominate the track programme as they have in the last seven editions.

Gallagher and Ward beat Scotland two heats to nil to take out the tandem B sprint event, and a few minutes later the pursuiters broke the Games record they had set earlier on Friday in qualifying.

Gallagher was already the only Australian to win a medal at the summer and winter Paralympics.

The New Zealanders had to start four riders, but one of them pulled out early so she could ride later on Friday in the team sprint finals.

That meant the Australians were never going to lose the final, but they went under their 4:14.605 qualifying ride.

The evergreen Matt Glaetzer then picked up his fourth Commonwealth gold, bringing home the men’s sprint title with a hammering of England’s trio after dazzling work from Leigh Hoffman and Matt Richardson.

The trio set a new Commonwealth Games record of 42.042 seconds, after also setting a new mark in the qualifying ride.

But the men’s team pursuit failed to reach the gold medal ride for the first time at a Commonwealth Games.

Australia had won gold or silver since the team pursuit was added to the Games program in 1974 and four years ago the squad broke the world record in Brisbane.

Luke Plapp is the only member of the bronze-medal winning combination from the Tokyo Olympics.

There was bittersweet consolation for Australia when they easily beat Wales in the bronze-medal ride.

Graham Frislie replaced Moriarty and while Australia’s time of 3:50.403 bettered their qualifying time, it also would have been good enough to qualify them in the gold medal ride.

New Zealand broke the Games record they set in qualifying, clocking 3:47.575 to beat England for the gold medal.

James Wootton and pilot Luke Zaccaria posted the fastest time in the men’s tandem 1km time trial, but the next three teams put them out of the medals.

Commonwealth Games: Australia sweeps up medals in the pool and velodrome as gold rush begins