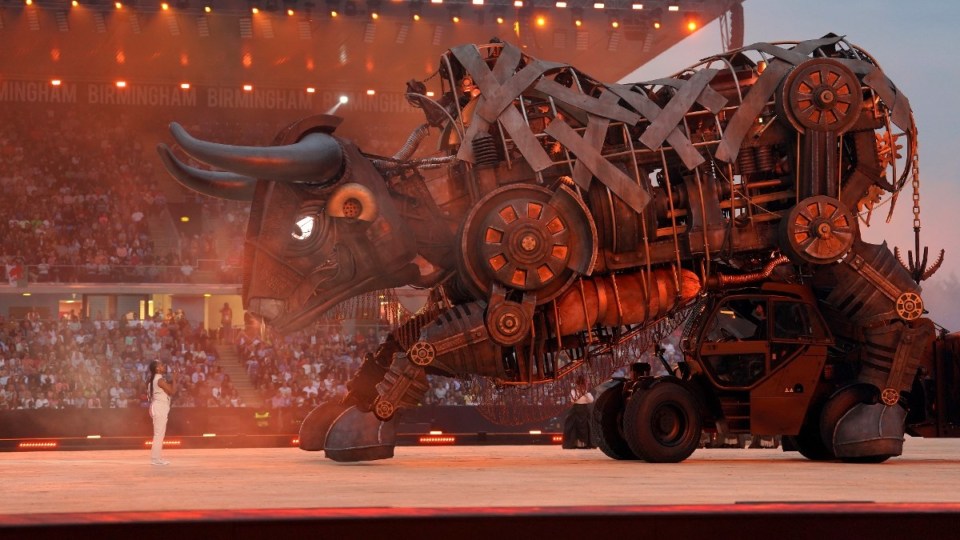 Organisers of the Commonwealth Games have promised the most inclusive games possible as the opening ceremony gets underway on Friday morning (Australian time).

The ceremony in the British city of Birmingham opened with a celebration of the cultural diversity of the competing nations, with the beating of an African tribal drum setting the scene.

The event has also paid homage to all things British, including famous vehicles Land Rover, Mini and Jaguar which manoeuvred into the shape of the union jack.

A giant animatronic bull was led into the stadium by underpaid, overworked female chain-makers of the Industrial Revolution who broke free during a wage strike in 1910.

The significance of the bull relates to The Bull Ring, a major shopping area in Birmingham which has been an important feature since the Middle Ages when its market was first held.

Some of the loudest cheers went to inspirational Malala Yousafzai, the young girl who advocates for girls’ and women’s rights after surviving the Taliban, who lives in Birmingham.

A boop makes everything better #B2022 pic.twitter.com/anXl0vJnBM

The extravaganza of 2000 performers tracing the story of Birmingham’s past and present was produced by Peaky Blinders creator Steven Knight.

The creative display culminated in athletes from the 72 competing nations and territories entering the stadium, with the Australian team heading the parade led by Eddie Ockenden and Rachael Grinham.

Musical icons Duran Duran, who began their career in Birmingham, closed the show with the British band’s classic tunes exciting crowds in the stadium and online, belting out fan favourites Save A Prayer, Planet Earth and Ordinary World.

The Games will run for 11 days, with 6,500 athletes competing in 280 medal events. For the first time, eight Para-sports have been fully integrated.

Birmingham Commonwealth Games officials said they worked hard to make the event as inclusive as possible.

Tom Daley, a champion diver, who has been stinging in his criticism of homophobia ahead of the Games, was among the athletes carrying the Queen’s Baton in its final lap.

The baton relay had travelled through the member countries — from Africa to the Americas and Asia — and includes a platinum strand in a nod to the Queen’s jubilee..

“Our values of humanity, equality and destiny are really, really important to us,” Sadleir said.

“We do pride ourselves as being what we think is probably the most inclusive Games, in terms of the types of programs you will see.

“We set up a pride network, where we brought together athletes and CGAs (Commonwealth Games Associations) from around the world to talk about what it is we can do to create a safe environment for people to discuss and learn and respect each other.”

Ms Sadleir added the Commonwealth Games was limited in what it could do to influence laws in member nations.

“We’re not a government agency, we’re an international sports federation, so there are limitations on what we can and cannot do,” she said.

“We cannot go and change the rules in countries, but what we can do is create opportunities for people to discuss issues in a safe environment.”

She said Pride pop-ups had been set up in the athlete villages to encourage discussion and there is a Pride House in Birmingham during the Games.

Ms Sadleir said the Birmingham Games would cope with whatever challenges are thrown at them, noting they have overcome plenty already.

Another train strike scheduled for Saturday is the latest issue for Games organisers.

Meanwhile earlier in the ceremony, Nobel Peace Prize laureate Malala Yousafzai addressed the Birmingham crowd in a heartfelt message to the city she now lives in.

The Pakistani activist was shot by the Taliban as a teenager and told of how Birmingham helped and welcomed her and her family.

“Tonight teams from 72 countries and territories join the people of Birmingham to celebrate friendship across borders. The young athletes who will compete over the next two weeks represent millions of girls and boys across the Commonwealth,” she said.

“Our shared hope for the future. A future where every child can go to school. Where women can fully participate in society. Where families can live in peace and indeed in dignity.

“Over the next weeks as we watching credible athletes of the Commonwealth Games remember that every child deserves the chance to reach their full potential and pursue their wildest dreams. And now it is my honour to say, welcome to Birmingham! Thank you.”

Games organisers are confident Birmingham will meet, or even exceed, their ticket sale forecasts.

“We’re on track … to be the largest Commonwealth Games, in the UK certainly, in terms of ticket sales,” he said.

“We’ve just overtaken the last edition on the Gold Coast.

“This morning’s report had us pretty close to 1.3 million tickets sold, within the next couple of days we should have overtaken Glasgow’s ticket sales (in 2014) as well.

“So there’s a huge appetite in the city.”