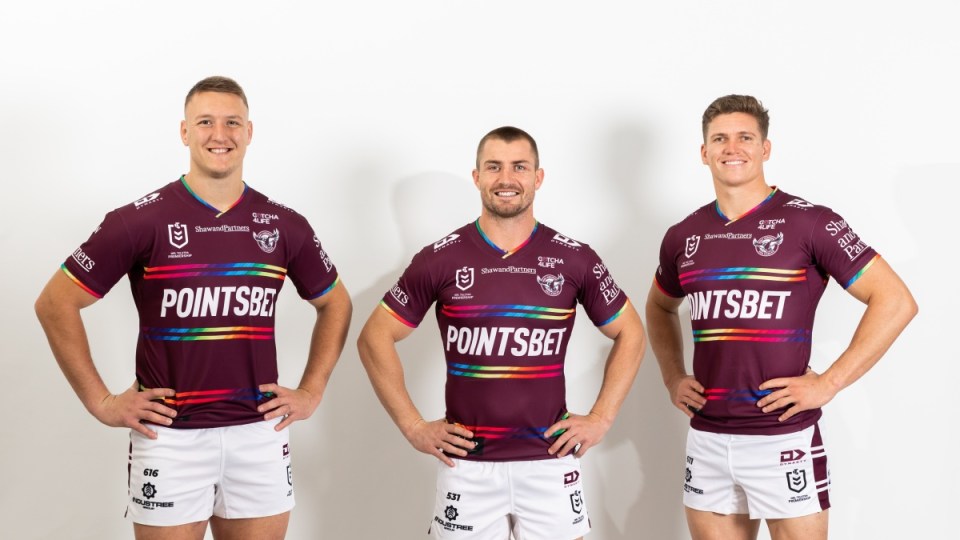 Manly's decision to use a pride jersey has caused unrest among the Sea Eagles' playing ranks. Photo: AAP

A group of up to seven Manly players will boycott Thursday night’s NRL game against Sydney Roosters over the Sea Eagles’ decision to wear a jersey promoting inclusion.

The Sea Eagles announced on Sunday night that they would wear an LGBTQI jumper for the crucial match, with a rainbow design replacing the strip’s white piping.

But that decision has caused some unrest among religious members of the playing group who are unhappy they were not consulted by club management.

Kieran Foran, Reuben Garrick and Sean Keppie were among those to help launch the strip, but other players claim they learned about the move over social media on Sunday night.

Kudos to the Manly Sea Eagles for the rainbow jersey initiative, now the test is was it just window dressing or a true statement of inclusion.

Ian Roberts having stood alone a solitary figure in the NRL brave enough to live his authentic life, must be devastated.#Auspol pic.twitter.com/0fgK85z4HL

The Sea Eagles board met on Monday night to discuss the players’ concerns but the club opted against releasing an official statement on the matter.

Sea Eagles coach Des Hasler and captain Daly Cherry-Evans will front the media on Tuesday, but Hasler is understood to be supporting the players’ decision to sit the game out.

The round 20 match looms as a crucial one for Manly, with the Roosters and Sea Eagles equal on wins in eighth and ninth place respectively and separated only by for-and-against points.

After losing to fellow finals aspirants St George Illawarra last week, the Sea Eagles can ill afford another defeat, with difficult matches against Parramatta, Cronulla and Canberra to follow.