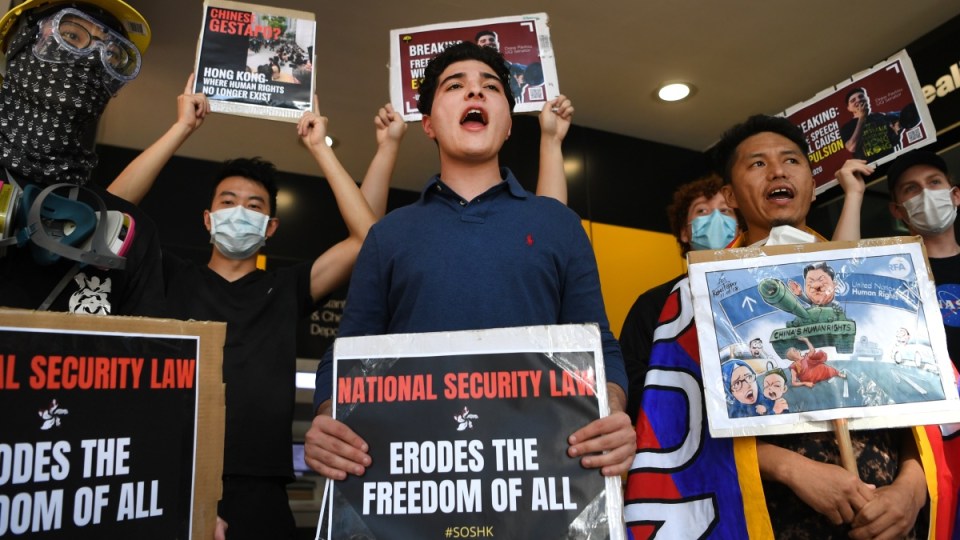 A serial anti-China activist who was thrown out of Wimbledon has  accused Beijing of faking a bomb-threat email in order to have him arrested in London.

Drew Pavlou, 23, from Queensland, was taking part in a small protest outside the Chinese embassy in London when police arrived and arrested him.

The activists were displaying the flags of Tibet, Taiwan, and the flag used to represent the Uyghur people and had intended to glue them to the gates, the ABC reports.

But about 20 minutes into the protest, London police cuffed Mr Pavlou and accused him of having earlier emailed a bomb threat to the Chinese embassy.

Mr Pavlou denied making a threat of any kind, telling the ABC such an allegation was “absolute insanity”.

“There’s very clearly someone who’s just impersonating me, sending out these terrible emails, and I’ve spent 23 hours in a cell because of it,” he said.

Mr Pavlou describes himself as a human rights activist, larrikin and adventurer from Australia.

He has been a vocal critic of China and has staged a number of protests highlighting the communist government’s human rights record.

Mr Pavlou said he was a peaceful protester but the Chinese government was trying to paint him as a terrorist.

“I wanted to peacefully protest. I have done nothing wrong and the Chinese government is inventing this narrative that I’m a terrorist. It’s just insanity,” he told the ABC.

He posted a video to Twitter saying he was held by police for 23 hours.

“I was held incommunicado with no ability to tell anybody where I was, I was denied access to lawyer for more than 10 hours, they claimed my lawyers were not available but my lawyers called the police dozens of times,” he tweeted.

The Chinese Embassy in London reported me as a terrorist for peacefully protesting outside, UK police arrested me and held me incommunicado so no one knew where I was, I was inside for 23 hours, I want to go home I miss my family but they’ve threatened to arrest me at the border pic.twitter.com/fQgfZVnE3s

Earlier this month, Mr Pavlou attended Wimbledon where he shouted, “Where is Peng Shuai?” and held up a sign with the same message.

He was thrown out from centre court during the Wimbledon men’s final between Novak Djokovic and Australian Nick Kyrgios.

He said he shouted the message during a stoppage in play and was then forcefully removed from the stadium.

“I didn’t want to disrupt the actual match itself, so I waited to make sure there was a break in the play and then I just basically held up a sign saying ‘Where is Peng Shuai?'” Mr Pavlou said.

“And I just said, ‘Where is Peng Shuai? This Chinese tennis star is being persecuted by the Chinese government. Why won’t Wimbledon say something?”

Peng is a retired professional tennis player from China who last year accused a former high-ranking member of the country’s ruling Communist Party of sexual assault. She has made very few public appearances since then.

Mr Pavlou made made a similar protest at the Australian Open.

In June, he was among a group of protesters who crashed an address by Chinese ambassador Xiao Qian in Sydney and interrupted him minutes into his address.

They shouted about the large scale detention of the Uyghurs, a minority ethnic group in China’s north-western province of Xinjiang.

“You’re a disgrace,” a protester shouted.

“What about freedom of expression.”

Mr Pavlou was removed from the event, after holding up a sign which read “Free Tibet” and “Free Hong Kong”.

The university also cut the online feed of the address several times during the interruptions.

In response to the protesters, Mr Xiao said there was no such thing as “absolute freedom”.

“Those who are attending should respect the law and order,” he said.

In response to a question about Australians and those with loved ones in China who are being detained, Mr Xiao said the detention of the Uyghur community was not a matter of human rights, but of “separatism” and “terrorism”.