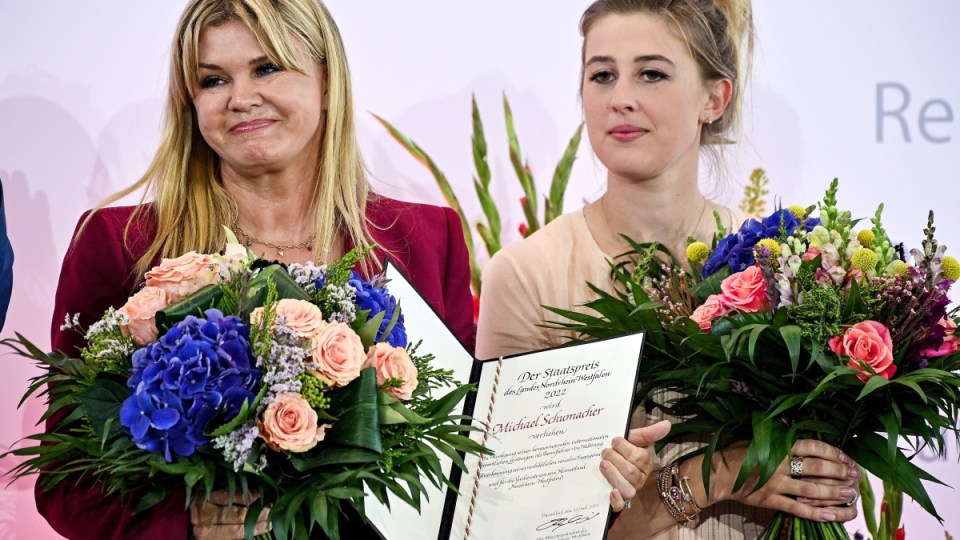 Formula One great Michael Schumacher has received the prestigious State Prize from his German home state of North Rhine-Westphalia.

With the 53-year-old seven-time world champion shielded from the public eye since a severe skiing accident in December 2013, his wife Corinna and daughter Gina received the prize at the ceremony in Cologne’s Motorworld.

Son Mick, also an F1 driver, missed the ceremony because he was feeling unwell.

Mr Wüst praised Schumacher as a person “who has a big heart and for whom it was important to think about others,” highlighting donations from Schumacher and his family for victims of the 2004 tsunami in Asia and last year’s floodings in NRW and surrounding areas.

Jean Todt, Schumacher’s long-time team principal at Ferrari and ex-president of the world governing body FIA, delivered the laudatory speech for the driver who grew up in Kerpen near Cologne before moving to Switzerland with his family.

“Through his wins and success he rose from humble conditions to a true citizen of the world who worked closely with people from many different cultures,” Todt said.

“But he never forgot where his roots were – about 30 kilometres from here – and he always remained grounded.

“I’m proud to call Michael my friend, and I’m just as proud to have a very close friendship with his family,” said the Frenchman Todt, naming the Schumachers “an inspiration for many people”.

Todt, who is among very few people with access to Schumacher, added: “Of course we all wish that he could accept the honour in person. We are missing him here, and we are not only missing him on days like today.”

Victoria 2026: What to expect from the next Commonwealth Games
Mass evacuations as fires rage across southern Europe
Today's Stories