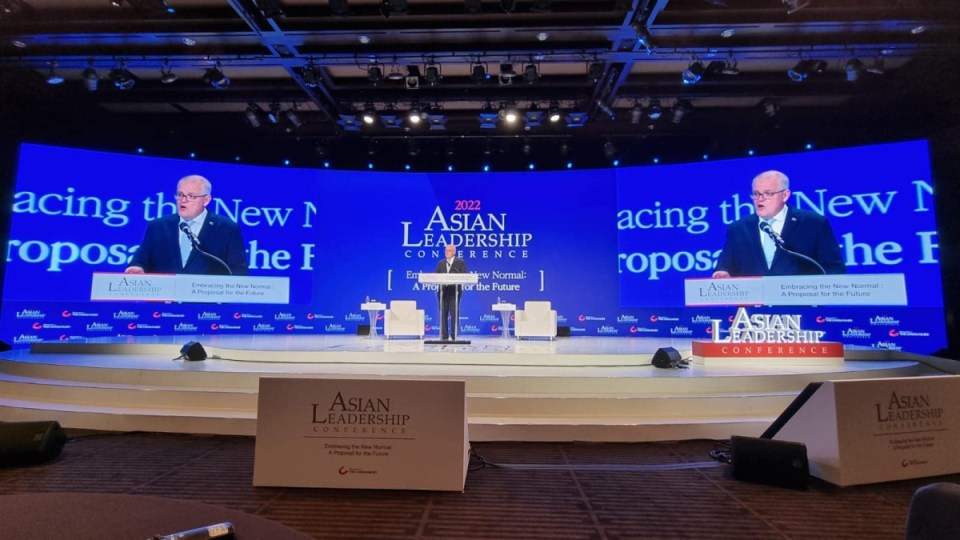 Scott Morrison has called out China’s “autocratic” leadership and argued the world has not seen such an unstable period in the Indo-Pacific since the 1930s.

In his first official engagement since losing the prime ministership in May, Mr Morrison took issue with China buying wheat from Russia while blacklisting Australia.

His comments came as Australia’s new Labor government seeks to restabilise the relationship with Beijing amid uncertainty over China’s increasing presence in the region.

Mr Morrison was speaking at the Asian Leadership Conference in South Korea.

The former prime minister defended his outspoken stance on China while in office, saying he had not been trying to provoke Beijing but defend Australia’s sovereignty.

He said over the past five or six years, China under the leadership of President Xi Jinping had become “more assertive” and was “seeking to assert its presence and influence over sovereign countries in the region, including Australia”, The Australian reports.

Mr Morrison he had “no quarrel with the Chinese people” but “there has been a very different tone under the most recent Chinese leadership, under President Xi”.

“There has been a more autocratic tone to this leader of this government.

“The current leadership of the Communist Party in China has taken a much more assertive tone and Australia’s response and my response was not seeking to provoke but to simply stand firm and to stand our ground.

“And I think this is very important because if you don’t, further incursions are taken.”

Mr Morrison said China had gradually moved into the region, turning “islands into airports” and nothing had been done to stop them.

“Nothing happened, so further ground was taken. So now we find ourselves in a situation which we would prefer wasn’t the case,” he said.

“So I think standing your ground on your values shouldn’t be seen as aggressive or in any way provocative. I think it is just seen as a country respecting itself and seeking to respect others.”

Mr Morrison also strongly criticised China’s support for Russia’s invasion of Ukraine and “going around trade embargoes” to keep doing business with Moscow, despite the rest of the world’s resolve.

“Australia’s selling wheat into the world – when you’re buying Russian wheat rather than Australian wheat at a time when Russia is actually invading another country and committing war crimes, those things don’t line up for me and I don’t think for fair-minded, freedom-loving people,” he said.

During his prime ministership Mr Morrison raised the ire of China by calling for an international investigation into the origin of the COVID pandemic, and he once again returned to that issue.

He told the forum it was a “major disappointment” China had been unwilling to co-operate.