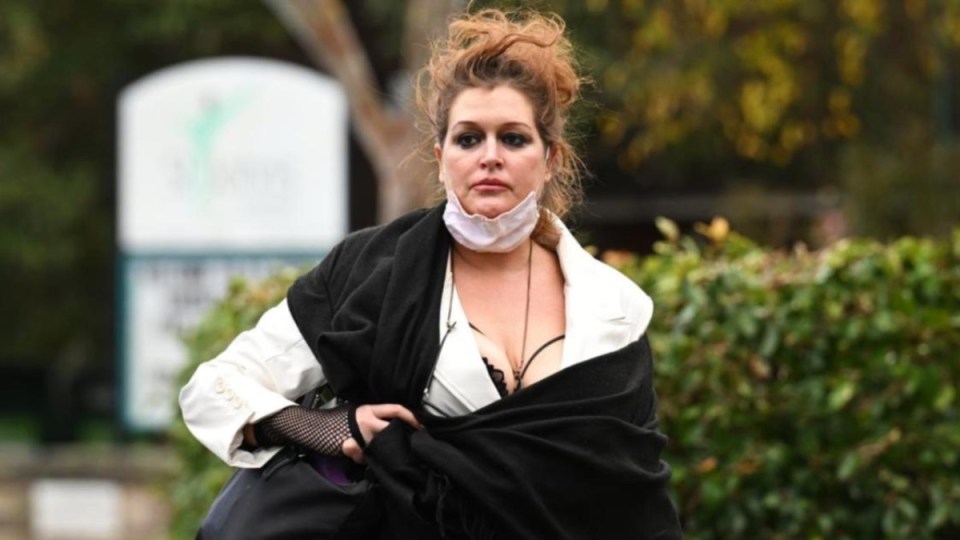 Former model Tziporah Atarah Malkah, also known as Kate Fischer, has broken down in court describing a humiliating naked video of her leaked to television networks by a man she knew.

The 48-year-old appeared in Sutherland Local Court on Thursday after she was found guilty of breaching an AVO order.

In May 2018, the 1990s star said she was sitting down for a pub lunch of fish and chips with friends when a large screen televised “me naked flapping my arms around looking like a lunatic”, Ms Malkah said.

James Packer’s ex-girlfriend said her naked body had hardly been blurred by the television stations, which aired the footage without her consent.

“I was just a puddle of disbelief and feeling the world had turned upside down, it wasn’t a fair world, not a just world, a disgusting, disgusting thing to happen.”

Two days earlier Ms Malkah had taken an AVO out on the man, and the pair were arguing when he secretly filmed her.

While the incident happened more than four years ago, it has taken a lasting toll on Ms Malkah.

“When I walk into a shopping mall and I’m just getting bread and eggs and milk like a normal person, I feel so ashamed, I have my head down,” she said.

She tried to tell police about the incident for eight months but she was laughed at and mocked, told she had no evidence and that it was “Chinese whispers”, despite the images being shown on television, she said.

Eventually, she made a police statement at Ulladulla, which she shared online, in contravention of the AVO.

Ms Malkah has worked in aged care, for a refuge, and most recently as a traffic controller.

“I’m not snobby, as long as I am working. I just got so bullied. The taunting, the sneering, it’s been a very lonely, horrible feeling,” she said.

She said there had been conversations about returning to television but that advertisers were conservative and she “doesn’t fit their wholesome brand”.

“Of course I want to go back and do what I’m good at, what I want to do, and what the punters want to see.”

She now lives “hand to mouth, week to week,” and borrows money from family and friends.

And due to police checks and being unable to work with the elderly or children, she has created an OnlyFans online account.

Magistrate Jennifer Atkinson found Ms Malkah was a person of good character, had good prospects of rehabilitation and was unlikely to re-offend.

“The publication of material unclothed … I accept was incredibly distressing and it still clearly is still very distressing for you,” Ms Atkinson said.

“This has been a very traumatic experience.”

Ms Malkah was not criminally convicted and was sentenced to a two-year good behaviour bond.

Outside court, she said she felt mixed emotions

“When [the magistrate] said to me ‘you know, I could put you in jail for two years’ … I was like, I’m going to be another woman who gets dudded by the system.”

While she was relieved as she “didn’t pack for jail”, Ms Malkah remained disappointed at the TV networks.

“That has done a lot of damage to me … my mental health, friends have backed away from me, it’s been absolutely horrific,” she said.