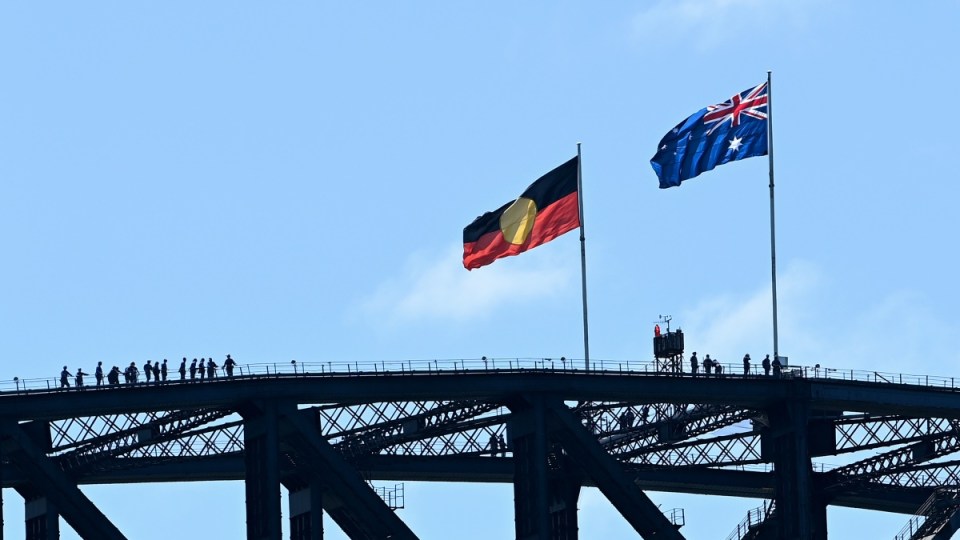 The Aboriginal flag will permanently replace the NSW flag on top of the Sydney Harbour Bridge. Photo: AAP

The New South Wales government has scrapped its plan to install an extra flagpole on the Sydney Harbour Bridge to fly the Aboriginal flag.

Instead the Aboriginal flag will permanently replace the NSW flag on the iconic structure.

Premier Dominic Perrottet on Sunday confirmed the change to the Sydney Morning Herald, labelling it a “practical and pragmatic solution which makes sense”.

The $25 million cost of the additional flagpole installation was revealed by Mr Perrottet last month.

It prompted a response from shadow treasurer Daniel Mookhey that accused the government of preparing to build the “world’s most expensive flagpole”.

“Our Indigenous history should be celebrated and acknowledged so young Australians understand the rich and enduring culture that we have here with our past,” Mr Perrottet said in a statement at the time.

“Installing the Aboriginal flag permanently on the Sydney Harbour Bridge will do just that and is a continuation of the healing process as part of the broader move towards reconciliation.”

The flagpoles are about 20 metres high, the same as a six-storey building, while the flags require an attachment strong enough to withstand all weather conditions.

The funding will now instead be reallocated to Close The Gap initiatives.

The Aboriginal flag had been flying over the Sydney Harbour Bridge this past week for NAIDOC Week.

The Aboriginal and Torres Strait Islander flags have flown on a rotational basis above the West Gate Bridge during Reconciliation and NAIDOC weeks since 2019.

But when NAIDOC week ends on Sunday, the Aboriginal flag will remain in place on the bridge, replacing Victoria’s state flag.

The NSW flag will be relocated to the redeveloped precinct on Macquarie Street in the CBD.

The Stats Guy: Why the cost of everything is rising and what we can do to ease the pain
Third Tour de France rider quits as virus fears grow
Today's Stories