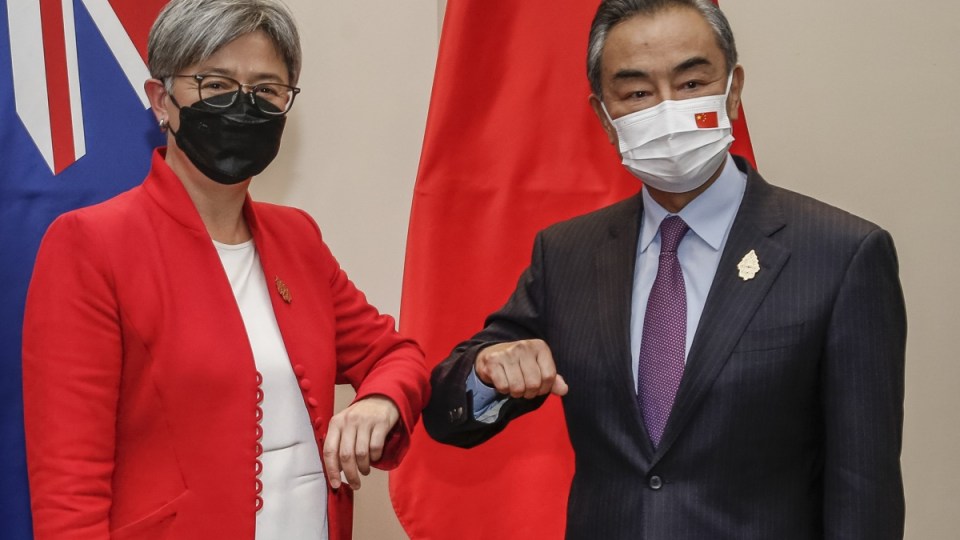 Foreign Minister Penny Wong has described her meeting with Chinese counterpart Wang Yi as an important first step in stabilising the relationship between the countries.

Senator Wong raised the issues of trade sanctions and Australians detained in China during her meeting with Mr Wang on the sidelines of the G20 Foreign Ministers’ meeting in Bali on Friday.

“We spoke frankly and we listened carefully to each other’s priorities and concerns,” Senator Wong told reporters of the talks.

“As you would expect I raised a number of issues in relation to bilateral, regional and consular issues.”

Senator Wong said she raised with Mr Wang the cases of detained Australian journalist Cheng Lei and writer Yang Hengjun, and others.

“Obviously we discussed trade blockages that exist, and that remains the government’s position, those trade blockages should be removed and we have said so publicly and our private position reflects that.”

China has issued trade sanctions against many Australian products including wine, beef and coal.

Senator Wong said stabilising the relationship would take time, effort, work and nuance, and noted that China’s differences with Australia were well known.

“We both recognised it is a first step for both our nations,” she said of the meeting with Mr Wang, the first between the foreign ministers of Australia and China since 2019.

Earlier Prime Minister Anthony Albanese said China had changed its position in the past decade to be “more forward-leaning” and “more aggressive”.

“We will co-operate with China, but we will stand for Australian values when we must,” Mr Albanese told reporters at a joint press conference in Sydney alongside New Zealand Prime Minister Jacinda Ardern.

“When we engage in the (Pacific) region, there aren’t strings attached.

We engage because that is the right thing to do by lifting up the development of our neighbours, we have a responsibility to do that.”

Ms Ardern indicated China had been more assertive in the Pacific, but countries in the region should not be forced to choose between who they partner with.

It comes after China signed a security pact with the Solomon Islands and seeks similar deals with other Pacific nations.

“It should be the Pacific priorities first and foremost, they should be free of coercion,” Ms Ardern said.

“There should be high-quality investment and infrastructure because that’s what the region deserves.”