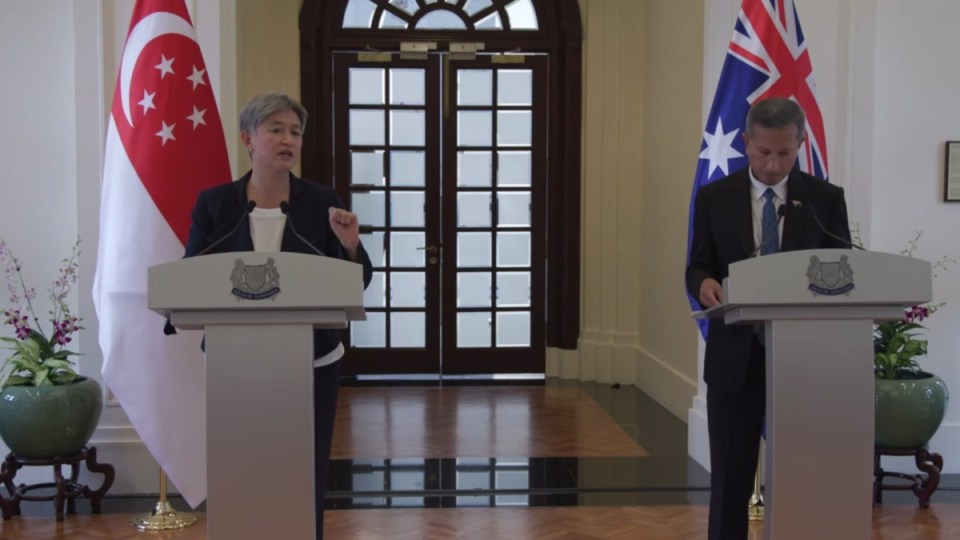 Penny Wong has equated South-East Asian security as Australian security in a policy address in Singapore.

Australia’s Foreign Minister arrived in the city state on Wednesday, her latest visit in a globetrotting start to her role.

Ms Wong addressed an audience of diplomats at British think tank, the International Institute for Strategic Studies, describing South-East Asia as Australia’s bridge to the world.

“What happens in, to and through this region will be strategically central to Australia’s future,” she said,

Australia has long-standing and vital relationships with many in the 10-nation ASEAN grouping.

Singapore is Australia’s fifth largest trading partner, with Malaysia and Thailand also in the top 10.

With Indonesia, Australia shares the world’s longest maritime border, and many other ASEAN countries contribute to Australia’s multicultural makeup.

However, Australia has weaker security tie-ups in the region than with other key allies.

Ms Wong said Australia was deeply invested in the region, despite the lack of formal defence deals.

“ASEAN centrality means that we will always think about our security in the context of your security,” she said.

“We understand deeply the ways in which they are interconnected.

“We believe that Australia must find its security in Asia, not from Asia. And that means, above all, in South-East Asia.”

ASEAN is also a complex region: As evidenced by different levels of support or condemnation for Russia’s invasion of Ukraine.

Vietnam and Laos voted against the suspension of Russia from the UN’s top human rights body, with other nations abstaining.

Ms Wong acknowledged these views while asserting Australia’s position that Russia was engaged in “unprovoked, illegal, immoral and inhumane” actions.

“It is especially important for countries that play leading roles in international fora, and countries with influence on Russia, to exert their influence to end this war,” she said, referencing China, which has also lent Russia support.

“Exerting such influence would do a great deal to build confidence in our own region.”

She quoted former prime minister Paul Keating and Singaporean leader Lee Hsien Loong, arguing for China to restrain its power for the benefit of others.

“The region and the world is now looking at Beijing’s actions in relation to Ukraine,” she said.

“The kind of restraint Prime Minister Lee and Mr Keating reference would give the region and the world greater confidence.”

Ms Wong may meet with her Chinese counterpart on her next trip, the G20 foreign ministers meeting in Bali, which begins on Thursday.

Indonesia will be the 10th country Senator Wong has visited since May’s federal election.