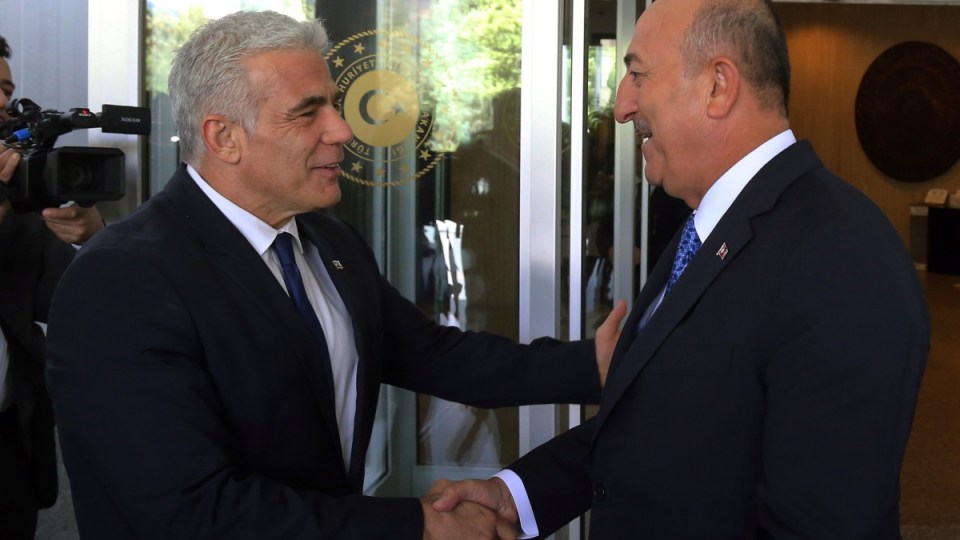 Mr Lapid arrived in Turkey on Thursday for talks with Turkish counterpart Mevlut Cavusoglu as the two countries press ahead with efforts to repair ties that have been strained over Turkey’s strong support for the Palestinians.

They were also expected to discuss a recent warning issued by Israel calling on its citizens to avoid travel to Turkey and urging Israelis in Turkey to leave immediately.

The warning said Israeli citizens could be targets of Iranian attacks.

The warning angered Turkey, whose economy depends on tourism to a large extent.

Officials in Ankara responded by issuing a statement that said Turkey was a safe country.

Israeli Prime Minister Naftali Bennett has since said that a joint operation with Turkey succeeded in thwarting several attacks and resulted in the arrest of several suspected operatives on Turkish soil in recent days.

Police seized two pistols and two silencers in searches conducted in houses and hotels where the suspects were staying, according to the report.

Mr Lapid’s visit comes amid political turmoil in Israel, where Mr Bennett’s fragile, year-old government decided this week to dissolve parliament, triggering new elections which are set to take place in the autumn.

Under the agreement that forged Bennett’s coalition government, Mr Lapid is expected in the coming days to become caretaker prime minister until a new government is cobbled together after the elections.

Turkey and Israel were once close allies but relations grew tense under Mr Erdogan, who is a vocal critic of Israel’s policies toward the Palestinians.

The countries withdrew their ambassadors in 2010 after Israeli forces stormed a humanitarian flotilla bound for Gaza, which has been under an Israeli-Egyptian blockade since Hamas seized power there in 2007.

Israel apologised to Turkey for the deaths under a US-brokered agreement but reconciliation efforts stalled.

Turkey recalled its ambassador in 2018 after the United States recognised Jerusalem as Israel’s capital, prompting Israel to respond in kind.

The two countries have not reappointed their ambassadors.

Most fail grades ever: Heaters under fire after failing safety tests
Iranian court orders US to pay $5.8 billion for nuclear scientists
Today's Stories