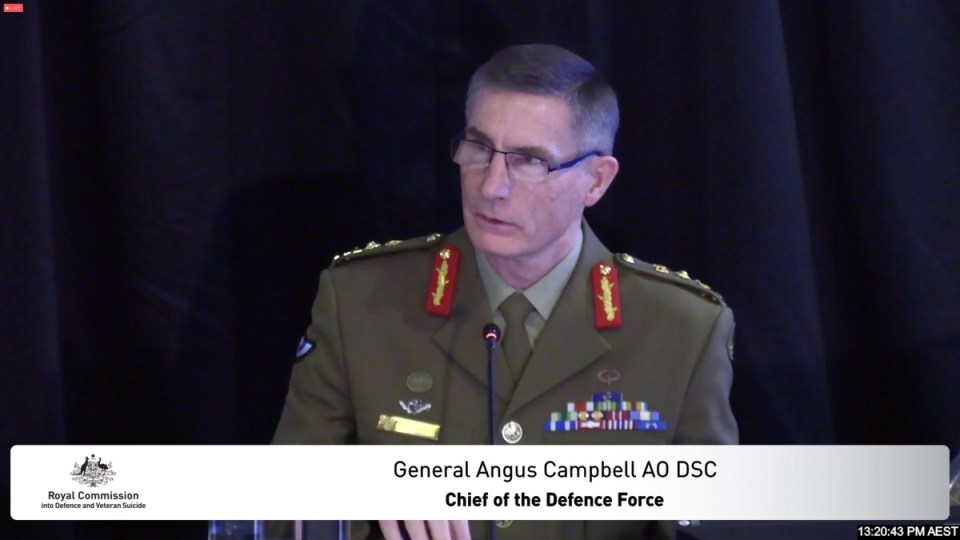 General Angus Campbell says the ADF is not yet getting it right in dealing with suicide issues. Photo: AAP

Australia’s defence force chief has admitted the military is not doing enough to stop suicide and suicidality in members and veterans, but says the armed forces are on the right path.

General Angus Campbell was testifying on the fourth day of the latest round of Royal Commission into Defence and Veteran Suicide hearings in Townsville, less than two weeks before his tenure ends on July 6.

“Defence is not doing enough to reduce the incidents of suicide and suicidality,” he told the inquiry after arriving in Queensland on Thursday.

“We are on a continuing journey, but I think that we’re in the right place in terms of the direction we’re going,” he said.

General Campbell revealed he did not receive any handover briefings or have discussions regarding suicide and suicidality in the ADF when he took the top job in 2018.

Asked by Counsel Assisting, Kevin Connor SC, if he regarded that as an omission and whether that would change in the future, the general said there was a process when new leadership came in.

But that did not mean he was not fully aware as army chief and chief of the defence force of the issue.

When pressed by Mr Connor, General Campbell conceded defence’s ability to maintain information on former ADF members was a particular area that needed to improve.

“You’ve accepted presently there are significant shortcomings in the ability to retain data on ex-serving members?” Mr Connor ventured.

“I do, counsel,” General Campbell replied.

“And ways need to be found to improve that?” Mr Connor followed.

“I agree with that, counsel,” the general said.

Mr Connor then said “I suggest to you that they need to be found relatively quickly, provided it’s a rigorous process,” to which the general agreed.

“Rigorous – and it will create for us a common view across the defence and DVA (Department of Veterans’ Affairs), which will be extremely valuable for the wellbeing of our people,” General Campbell added.

The general was questioned about his statement responding to questions from the commission, including as to why there was no public annual reporting of suicide-related data by defence.

General Campbell said he would take this up with the Defence Minister.

“I’m completely comfortable with the suggestion,” he told the hearing.

“I’m expecting that it will be a conversation that will lead to the outcome that has been proposed to you.”

Mr Connor pointed to defence’s current primary data systems and asked whether the general thought they should examine and pick up suicide-related events.

“Yes, I am counsel, but I am not yet confident across the force that every circumstance under the broad rubric of suicidality is detected, reported, recorded.”

Earlier, the commission heard post-traumatic stress disorders in veterans can have cascading effects on their families and particularly their children.

Associate Professor Ben Edwards and Dr Galina Daraganova gave evidence about a 2014 Vietnam Veterans Family Study into the physical, mental and social health of the sons and daughters of Vietnam veterans.

They discussed how PTSD and suicidality impacted veterans’ families and how the study findings carried weight for other groups of service men and women.

“The story here is really about PTSD and fathers, and how this cascades across generations and has intergenerational influences, and I think that is a very robust finding,” Professor Edwards said.

“There’s no doubt in my mind, based on the evidence … that that could potentially be an issue for other groups of serving men and women.”

The commission heard a veteran’s PTSD can present as an absence or detachment and explosive behaviour, and high rates of harsh or hostile parenting.

The study found 21 per cent of Vietnam veterans’ adult children had either been diagnosed or treated for depression, 41 per cent had suicidal thoughts and 12 per cent reported suicidal plans or actions.