Hollywood actor Johnny Depp has won his defamation case against ex-wife Amber Heard after seven jurors revealed their unanimous verdict in the TV trial that has captivated audiences.

The jurors found Heard’s 2018 opinion piece in which she described herself as “a public figure representing domestic abuse” had defamed Depp and had been done maliciously.

They found that although the article did not name Depp, it had been referring to him, that Heard’s accusations were false and that the article was deliberate and intentional.

The jurors said Heard had acted with malice and anyone reading the article would have believed she was referring to her high-profile ex-husband.

But jurors also found that Depp defamed Heard — through his attorney — and awarded her $US2 million ($2.8 million) compensatory damages but no punitive damages.

They said Heard was defamed by Depp’s lawyer when he called her abuse allegations a hoax.

Heard was in the courtroom as the decision was read out on Wednesday afternoon (local time) and turned her eyes down as all seven questions answered ‘yes’ in favour of her ex-husband.

Depp’s fans could be heard celebrating outside the courtroom as the jurors’ lengthy decision was being read out.

Heard had arrived earlier with her sister and appeared grim as she stood with her legal team and awaited an outcome.

Depp’s spokespeople informed media that the Hollywood star would not be present.

The seven-person civil jury reached a verdict just hours after they resumed deliberations on Wednesday after conferring for about nine hours over two days.

Heard released a statement immediately after the verdict was read out.

“The disappointment I feel today is beyond words. I’m heartbroken that the mountain of evidence still was not enough to stand up to the disproportionate power, influence, and sway of my ex-husband,” the statement said.

“I’m even more disappointed with what this verdict means for other women. It is a setback.

“It sets back the clock to a time when a woman who spoke up and spoke out could be publicly shamed and humiliated. It sets back the idea that violence against women is to be taken seriously.

“I believe Johnny’s attorneys succeeded in getting the jury to overlook the key issue of Freedom of Speech and ignore evidence that was so conclusive that we won in the UK.

“I’m sad I lost this case. But I am sadder still that I seem to have lost a right I thought I had as an American – to speak freely and openly”.

Outside court, Depp’s team said the verdict proved the claims against their client were unsupported by any evidence.

BREAKING: Attorneys for Johnny Depp: "Today's verdict confirms what we have said from the beginning — that the claims against Johnny Depp are defamatory and unsupported by any evidence." https://t.co/zCitxTSXr7 pic.twitter.com/6PT32omBTw

Depp later posted a statement to Instagram in which he said “the jury gave me my life back. I am truly humbled”.

In the typed comments, Depp said he had given considerable thought to pursuing the case “knowing very well the height of the legal hurdles that I would be facing, and the inevitable, worldwide spectacle into my life”.

“From the very beginning, the goal of bringing this case was to reveal the truth, regardless of the outcome.

“Speaking the truth was something that I owed to my children and to all those who have remained steadfast in their support of me.

“I feel at peace knowing I have finally accomplished that.” 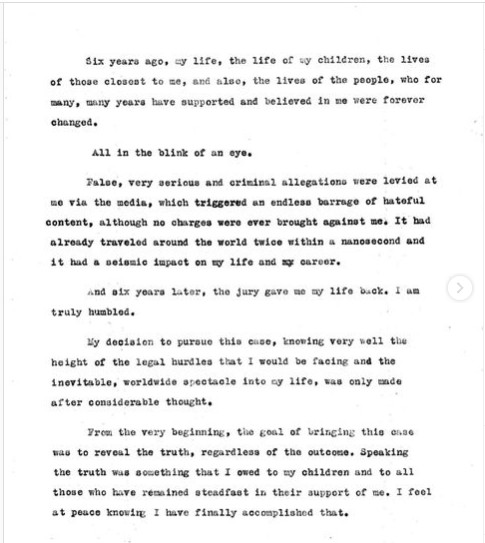 When the court opened in Virginia, US, Judge Penney Azcarate asked the public gallery to contain themselves before the verdict was read out.

“This is a court of law and regardless of the verdict I will not tolerate any outburst whatsoever,” she said.

You could hear a pin drop in the courtroom as the yellow envelope containing the verdict was handed from the jurors to the judge.

Judge Azcarate pulled out the papers and then said “attorneys approach”, which was asking lawyers on both sides to approach the bench for a private discussion.

As the courtroom held its breath, Judge Azcarate explained that the jurors had not properly completed the paperwork which required them to fill out the section on compensatory damages.

She told the seven jurors “there has to be compensatory damages” and she asked the jurors to go back and fill in the lines.

“Go back to the deliberation room and do that for me,” she asked.

To the courtroom she said: “We’re in recess until we hear back from them. Don’t go too far.”

Only some ten minutes later, the jurors returned to answer the question on everyone’s lips.

Depp sued his ex-wife for $US50 million ($69 million) while Heard filed a $US100 million ($140 million) counterclaim against the Pirates of the Caribbean star after his lawyer called her allegations a hoax.

The verdicts bring an end to a televised trial that Depp had hoped would help restore his reputation, though it turned into a spectacle of a vicious marriage.

Throughout the trial, fans — overwhelmingly on Depp’s side — lined up overnight for coveted courtroom seats. Spectators who couldn’t get in gathered on the street to cheer Depp and jeer Heard whenever either appeared outside.

Depp sued Heard for libel in Fairfax County Circuit Court over a December 2018 op-ed she wrote in The Washington Post describing herself as “a public figure representing domestic abuse.”

His lawyers said he was defamed by the article even though it never mentioned his name.

While the case was ostensibly about libel, most of the testimony focused on whether Heard had been physically and sexually abused, as she claimed.

Heard enumerated more than a dozen alleged assaults, including a fight in Australia — where Depp was shooting a Pirates of the Caribbean sequel — in which Depp lost the tip of his middle finger and Heard said she was sexually assaulted with a liquor bottle.

Depp said he never hit Heard and that she was the abuser, though Heard’s attorneys highlighted years-old text messages Depp sent apologising to Heard for his behaviour as well as profane texts he sent to a friend in which Depp said he wanted to kill Heard and defile her dead body.

In some ways, the trial was a replay of a lawsuit Depp filed in the United Kingdom against a British tabloid after he was described as a “wife beater.” The judge in that case ruled in the newspaper’s favour after finding that Heard was telling the truth in her descriptions of abuse.

In the Virginia case, Depp had to prove not only that he never assaulted Heard, but that Heard’s article, which focused primarily on public policy related to domestic violence, defamed him.

He also had to prove that Heard wrote the article with actual malice. And to claim damages he had to prove that her article caused the damage to his reputation as opposed to any number of articles before and after Heard’s piece that detailed the allegations against him.

Depp, in his final testimony to the jury, said the trial gave him a chance to clear his name in a way that he the UK trial never allowed.

“No matter what happens, I did get here and I did tell the truth and I have spoken up for what I’ve been carrying on my back, reluctantly, for six years.” Depp said.

Heard, on the other hand, said the trial has been an ordeal inflicted by an orchestrated smear campaign led by Depp.