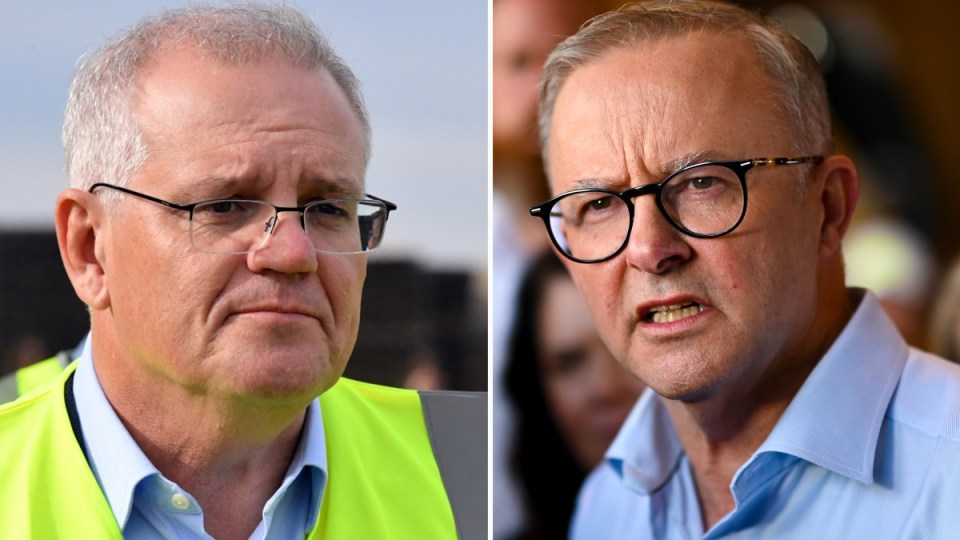 Polls point to a win for Anthony Albanese over the incumbent Scott Morrison. Photo: AAP

Voting has opened in Australia’s eastern states as major party leaders make a final pitch to undecided voters and polling tips a change of government.

Votes will be cast for 1203 House of Representatives candidates across 151 seats at ballot boxes on Saturday.

In the Senate, there are 421 candidates vying for 40 seats across the states and territories.

With polls suggesting the nation is likely to get its sixth prime minister in nine years, Mr Albanese has told the ABC outside Melbourne’s iconic MCG Labor is kicking with the wind at its back.

“The fourth quarter is what matters and I hope to finish ahead when the siren sounds,” he said.

The Opposition Leader says he is aiming to form a majority government, with a minimum target as low as the Coalition’s thin 76-seat grasp on Parliament House during its term.

Mr Albanese says his party has a plan for a “better future”, including action on climate change, bolstering secure work and reinvigorating local manufacturing.

Labor starts with 68 seats, plus notionally the new Victorian seat of Hawke.

The major parties will need 76 seats for a majority in the lower house.

Scott Morrison’s Liberal-National government came to the election holding 75 seats, having lost Stirling in WA in a redistribution.

The Prime Minister is promising “different gears” to his bulldozer approach if re-elected but says it was needed as he steered Australia through the pandemic.

“We got in there and turned it around,” he told the ABC on Saturday.

Mr Morrison said his government would realise the economic opportunities recovery, spruiking its recent offering of allowing people to access their superannuation to buy a home.

When 6pm rolls around, the ballots of more than 17 million voters will start to be counted, including those of more than five million who voted early.

On Sydney’s northern beaches, Liberal Jason Falinski has told Sky News there is “no doubt” his party is the underdog.

Across the harbour, Labor’s Matt Thistlethwaite says the race will go down to the wire but he is confident.

Closely watched will be the success of the teal independents, who have run a well-funded campaign on climate change, integrity and women’s safety across a number of Liberal-held seats.

Allegra Spender, who is facing off against Liberal Dave Sharma in Wentworth, promised to be a voice for her electorate’s values “every single time”.

Opinion polls are averaging 53.5 per cent to Labor on a two-party preferred basis, according to The Poll Bludger website, which if reflected at the ballot box would result in 83 seats for the ALP.

The latest Newspoll in the Australian shows Labor 53-47 despite a two point drop in its primary vote to 36 per cent.

The campaign has focused on cost of living, economic management, national security, a federal integrity commission, climate and equality and safety for women.

Mr Albanese stumbled on economic questions early, playing into the hands of the Coalition’s attack over his inexperience.

Mr Morrison’s economic credentials took a hit with a rise in the cash rate and the latest wages figures coming in well below inflation.

Defeat for Labor will be the fourth in succession and mean the ALP has won majority government only once in the past 10 elections.

If Mr Morrison wins, he will be the first incumbent prime minister to claim two elections in a row since John Howard in 2004.

Election day marks the 60th anniversary of Aboriginal and Torres Strait Islander citizens being granted the right to vote in federal elections.

Election day under way as polls open throughout the nation