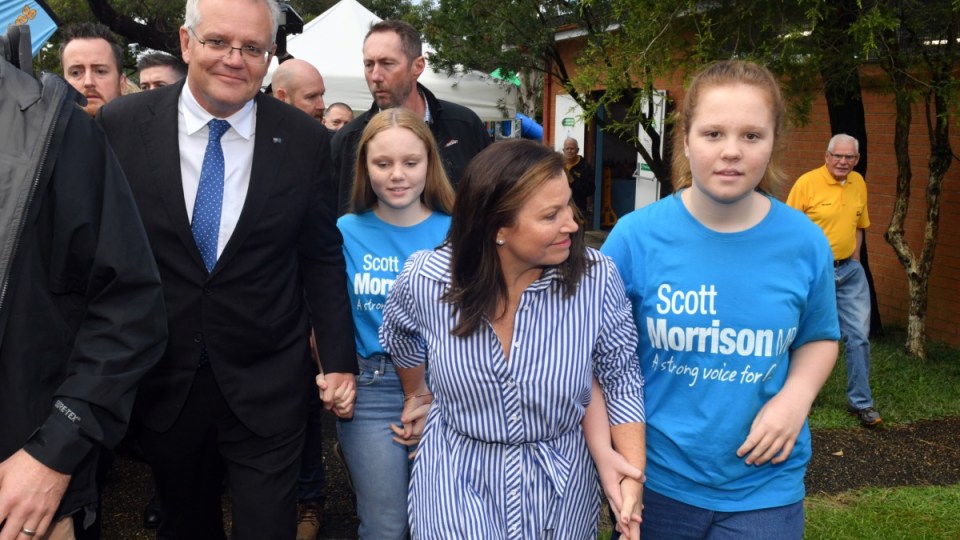 Scott Morrison arrives with his family to vote at Lilli Pilli Public School in the NSW seat of Cook. Photo: AAP

The two contenders to be Australia’s prime minister have cast their votes in their home electorates in Sydney in a contest that is expected to go down to the wire.

Labor leader Anthony Albanese headed to Marrickville Town Hall, joking it was a secret when asked who he had voted for.

“I like this seat (Grayndler) and this electorate. They’ve been very good to me,” Mr Albanese said.

“It’s a great honour to represent them.”

The major party leaders may have cast their vote, but it is not just blue, red and green placards and T-shirts at polling booths across NSW – a sea of teal represents the charge of independent candidates in some electorates.

In the seat of North Sydney, independent Kylea Tink turned up to vote in her signature pink.

She hopes to usurp moderate Liberal incumbent Trent Zimmerman, who holds the seat with a 9.3 per cent margin.

“There are thousands of people across the North Sydney electorate standing with me in this movement,” she told AAP on Saturday outside a polling station at Naremburn.

“People feel the two major parties are more focused on their own internal politicking.

“We’re ready to lead a new way of doing politics in this country.”

In the northern Sydney seat of Mackellar, independent Sophie Scamps is hoping to remove Liberal Jason Falinski, campaigning largely on climate and an integrity commission.

“It’s time to get the country moving forward again,” she told ABC TV on Saturday.

“We need transparent, robust debate in Canberra and to sort out the corruption of our system.”

Mr Falinski told Sky News there is “no doubt” his party is the election underdog.

Ms Spender cast her vote at Double Bay Public School on Saturday morning with supporters cheering her on.

“I can be an independent who stands for the values of this community,” she told the ABC.

Mr Sharma said there was a lot on voters’ minds.

“No one is voting on a single issue, or very few people anyway,” he said.

“They are weighing up a whole multitude of factors.”

In blue-riband Bennelong, John Howard’s old seat that he lost along with his government in 2007, NSW Liberal Premier Dominic Perrottet was handing out how-to-vote cards.

The seat is changing hands regardless, as Liberal MP John Alexander retires with the party picking Simon Kennedy as his replacement.

Mr Perrottet said it would be a tight fight for the seat which was important to the country and the Liberal party.

“It’s always difficult when you’ve got a retiring member … it makes it a challenge but the campaign is very strong here,” he told Sky News.

In Sydney’s inner west, in the seat of Reid, Labor’s Sally Sitou was hoping to oust Liberal incumbent Fiona Martin.

Ms Sitou told the ABC it was clear voters wanted action on climate change while raising concerns about cost of living and housing affordability.