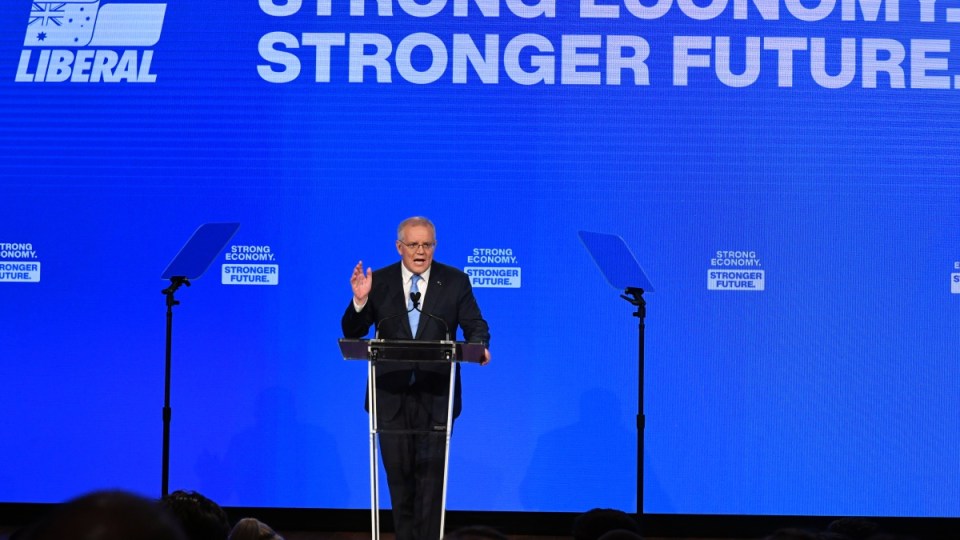 Prime Minister Scott Morrison has launched the Liberals’ election campaign vowing to change his governing style as the country moves on from the pandemic, with a policy to allow first-home buyers to dip into their retirement savings as one of his key re-election pitches.

Launching the campaign in Queensland – one of only two states in which Roy Morgan polling shows the Coalition is in front – Mr Morrison said a re-elected Coalition government would take a “very different approach” to governing compared to that seen over the past three years.

“We stand on the edge of a new era of opportunity. Better days are now ahead. But we cannot take them for granted,” the Prime Minister told the audience of about 300 party faithfuls at the Brisbane Convention Centre on Sunday.

“I also know Australians, they’re tired of politics. It’s been an exhausting time and they’ve certainly had enough of governments telling them how to live their lives, and I agree.

“If re-elected, you will see me as your Prime Minister, our government and our nation hit that extra gear needed to secure our nation’s future for those better days, to make things truly better, to step up beyond where we are today and put this pandemic behind us.”

Outside the Convention Centre’s entrance, a group of about 40 protesters flanked by a contingent of police chanted “Morrison out” and waved placards alluding to cost-of-living pressures and stagnant wages growth.

However, inside the auditorium, the mood was optimistic, with cabinet ministers, party supporters and candidates giving Mr Morrison a standing ovation as he walked onto the stage.

One audience member yelled out: “How good’s Queensland?”

During his 45-minute speech, Mr Morrison reiterated what is proving to be one of his government’s most effective messages: Voters would be taking a risk in dumping a government that has led the country through the pandemic.

Although much of the campaign launch was focused on the past, including the rolling out of JobKeeper, the creation of new trade apprenticeships and the decline in unemployment, Mr Morrison spent the second half of his speech detailing a “big plan” for the future.

“I’m seeking a second term because I’m just warming up,” he said to raucous applause.

As he left the stage and walked through the audience to cheers of “three more years”, Mr Morrison paused to greet former prime ministers John Howard and Tony Abbott, as well as several cabinet ministers who were in attendance.

The Coalition hoped to use the campaign launch to shore up support after recent polling pointed to an expected defeat next Saturday.

Queensland is considered safe territory for the Coalition, given it holds 23 of the state’s 30 seats.

But Labor is hoping to make gains in the Sunshine State, eyeing off Brisbane held by Liberal Trevor Evans on a 4.9 per cent margin and Ryan held by Julian Simmonds on a 6 per cent margin.

The standout announcement from Sunday’s campaign launch was a Coalition pledge to allow first-home buyers to unlock up to 40 per cent of their superannuation, up to a maximum value of $50,000, to use as a deposit on a home.

Called the Super Home Buyer Scheme, the policy would apply to new and existing homes, with the invested amount and a share of any capital gain to be returned to home buyers’ superannuation funds once they sell their property.

The policy idea was previously spruiked by Liberal MPs including Tim Wilson, who is at risk of defeat in his seat of Goldstein, but it failed to get up under former prime minister Malcolm Turnbull.

“We want to further help Australians get past what is the biggest hurdle on their path to home ownership,” Mr Morrison said.

“Superannuation is there to help Australians in their retirement.

“The evidence shows that the best thing we can do to help Australians achieve financial security in their retirement is to help them own their own home.”

But economists have warned the uncapped policy could push up house prices in the short term.

Earlier on Sunday, the Coalition announced a plan to allow Australians over the age of 55 to downsize their property and invest up to $300,000 from the proceeds of the sale into their superannuation fund.

Pensioners who downsize will also be given greater flexibility by exempting the sale proceeds from the age pension assets test for a longer period.

The benefit is already available to Australians over the age of 65, but the Coalition’s pledge, which is backed by Labor, should open it up to another 1.3 million people.

Mr Morrison also announced a plan to spend $375 million to build a new cancer centre in Queensland, telling the campaign launch it would combine research, diagnosis and treatment services.

The fund aims to build the nation’s industrial base and create new jobs in transport, defence, food processing, medical science and renewables.

French foreign minister hails defeat of Morrison and his ‘notorious incompetence’
Tiger Woods quits PGA tournament after the worst round of his career
COVID claims 45 more lives as nationwide daily cases soar to 18,000
Volodymyr Zelensky: How war will end as Ukraine ‘breaks backbone’ of Russian army
Peter Dutton touted as next Liberal leader as he claimed victory in Dickson
‘The urgency of the situation’: WHO steps in as monkeypox cases erupt around the world
Paul Keating attacks Coalition’s super for housing policy as economists warn of soaring prices
Today's Stories