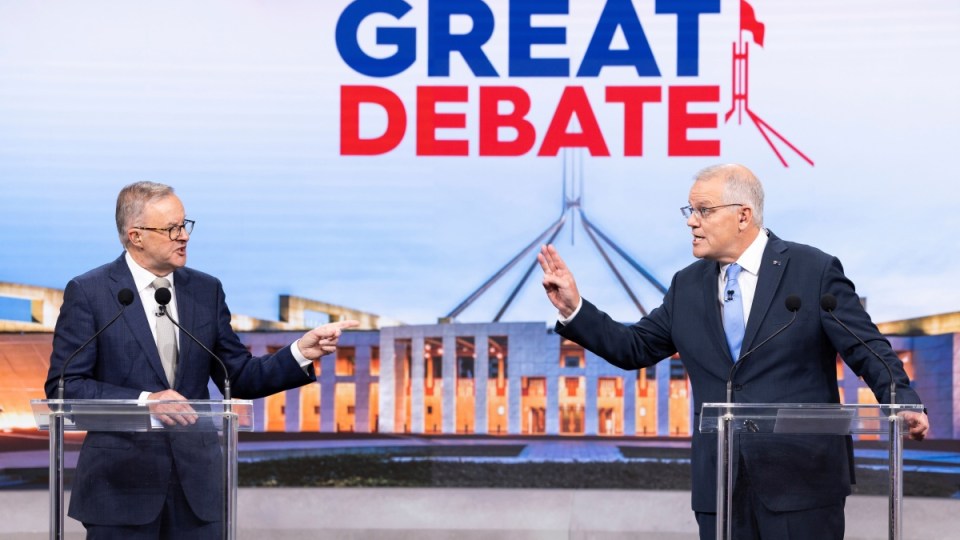 Colin Brinsden and Tess Ikonomou
12:30am, May 9

Scott Morrison and Anthony Albanese have clashed in a live leaders’ debate, with cost-of-living pressures continuing to dominate.

Optimism for a better future was a theme of the opening statements by both leaders before they squared off in the second leaders’ debate.

The Prime Minister admitted he made a mistake by saying getting COVID-19 vaccines into the people’s arms was “not a race”.

“It was a race … and we shouldn’t have described it in those terms,” he said during the live debate televised by the Nine Network on Sunday night, before early voting opens on Monday.

Mr Albanese said the government was “too little, too late” in its response to the pandemic.

“That is something that has defined this Prime Minister,” he said.

“It doesn’t matter whether it is the bushfires or the floods or the vaccine rollout, or the rapid antigen tests.”

Viewers were evenly split on which leader won the debate, Nine News said of more than 30,000 verdicts counted shortly after the debate.

Mr Morrison and the Opposition Leader were grilled by a panel of journalists on cost-of-living pressures, interest rates, climate policies, affordable housing and the economy.

When asked whether he had seen corruption in the Liberal Party, Mr Morrison replied: “No, I haven’t.”

Mr Albanese said “there is a stench around Canberra at the moment” and repeated his promise to legislate a national anti-corruption watchdog this year if he wins the election.

Mr Morrison asked his opponent how Australians can believe he is “now for them” after having changed his policies on negative gearing and boat turnbacks.

When questioning turned to the independent candidates, the panel asked the Prime Minister if he would resign to allow the Coalition to form government. He said: “No”.

Mr Albanese said he would not negotiate on any of the policies Labor took to the election in the event of a balanced parliament.

“I am campaigning very hard to form government in my own right,” he said.

The two leaders ruled out extending the fuel excise cut, which has seen the levy slashed by half for six months.

Despite their political differences, both leaders could agree the definition of a woman was an adult female.

Earlier, Mr Morrison announced a $53 million package to help slash the cost of IVF for would-be mums and dads.

During an earlier press conference, the PM insisted there is no evidence LGBT students have been expelled from religious schools on the basis of their sexuality.

“The point is it doesn’t happen … religious schools themselves don’t wish to do that,” Mr Morrison said.

He said costings will be released “in the usual way” before polling day, and then criticised Mr Morrison over the timing of the Coalition’s pending campaign launch and policy costings.

In Melbourne, Mr Morrison said he understands the hurdles and difficulties many Australians face when trying to have children.

“I want to help thousands more Australians achieve their dream of becoming parents,” he said.

About 50,000 patients received Medicare-funded assisted reproductive technology services in 2020-21, including through IVF, and now patients with cancer or people at risk of passing on genetic diseases will have their egg, sperm or embryo storage subsidised for the first time.

Labor said it would match the pledge in government.

It will also help playgroups recover from COVID-19 disruptions and expand their network across Australia.

“We know that over 90 per cent of human brain development occurs in the first five years,” said Mr Albanese, who was campaigning in Sydney.

Unlike Warringah independent MP Zali Steggall, Ms Spender says she is willing to work with the the Coalition, even if Scott Morrison remains its leader.