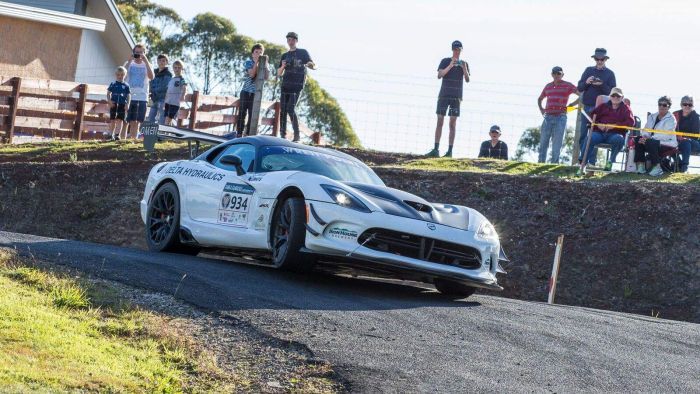 A Brisbane man has died after crashing his car in the annual Targa Tasmania rally.

An organiser of Targa Tasmania believes the tarmac car rally has a future despite a deadly crash, the fourth fatality in the event across two years.

A 59-year-old Brisbane man, described as a regular competitor, was killed on Wednesday when the car he was driving crashed 20 metres down a steep embankment at Mount Roland in the state’s north-west.

His wife, who was his passenger and navigator, walked away from the crash and was taken to hospital for observation.

The six-day rally, due to finish in Hobart on Sunday, has been downgraded to a non-competitive event – meaning drivers are bound to follow marked speed limits.

Three people were killed in two crashes at last year’s rally, which prompted changes, including to routes and speed, aimed at improving safety for competitors.

Motorsport Australia director Michael Smith said the event still had a future, but wasn’t sure what it might look like.

“I think it’s too early to say that there’s no future for Targa. It might look different,” he said on Thursday.

“That’s certainly part of the thinking. That’s a discussion we’ll have. Again, I just think it’s too early,” he said.

“Not knowing the circumstances of the incident, it’s probably too early for us to comment with any certainty on that at the moment.”

Targa Australia chief executive Mark Perry said the decision to put a line through the competitive part of the event was a difficult one, but necessary so the crash could be fully investigated.

He has described the man’s death during the 30th running of the rally as “shattering”.

He said the man, whose name has not been released by police, was a regular competitor.

The pair were in the final stage of the event’s second day and were one of the last few cars on course.

“It’s a long-term stage for us, not new, it’s not unfamiliar to any of the competitors, particularly this crew. They’ve done many events with us before,” Mr Perry said.

Tasmania Police crash investigators were examining the scene on Thursday.

Inspector Darren Hopkins said the road was wet but it wasn’t raining at the time of the crash, adding a medical condition couldn’t be ruled out as the cause.

A rally safe device, which contains intel about the car’s speed, has yet to be recovered from the vehicle.

It made 23 recommendations for future tarmac rallies, including speed limits, altering stages year-by-year to avoid complacency and a tiered licensing system.

Seventeen of those have been adopted by rally organisers, with six the responsibility of Motorsport Australia to implement.