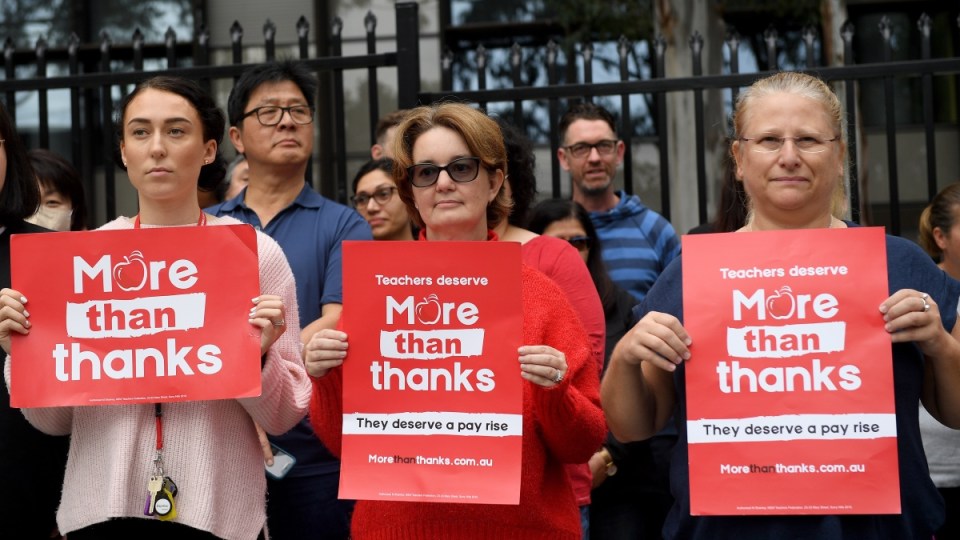 Teachers walked out of a Sydney school as the premier arrived in defiance of a union ban. Photo: AAP

A visit from the New South Wales Premier and Education Minister to a school opening on the first day of term one led to dozens of staff walking off school grounds in protest.

Their arrival defied a union ban on government MPs attending schools and prompted about 40 teachers to leave the campus, holding signs saying “Teachers deserve more than thanks. They deserve a pay rise”.

The NSW Teachers Federation executive voted on Tuesday to strike for 24 hours next Wednesday as part of a campaign for a pay increase, and authorised public school teachers to walk out if NSW government MPs arrived on campus.

The premier said he was welcomed at the school opening despite the incident.

“Let’s be fair dinkum, this is the Labor party and the union movement playing politics with our kids and our parents,” the premier told media on Wednesday.

Mr Perrottet said he met the minister and the head of the NSW Teachers Federation and was negotiating a structured outcome.

“I want our public service to be paid the very best,” he said.

“I know (the public service have) been on the frontline and worked incredibly hard during the pandemic.

“But just as everyone has. Every person, every mum, every dad, across our state has gone through an incredibly difficult time.

He said Queensland and NSW had leading public sector wage increases of 2.5 per cent, and he intended to lead the private sector as the country headed into a more inflationary environment.

Opposition Leader Chris Minns said he wished the walkout had not occurred, and teachers could have seized the opportunity to air their grievances directly with the government.

“In many cases, government MPs and politicians turn up to public schools with the media in tow, and teachers feel like they’re being used as a prop,” Mr Minns said.

“It’s a good opportunity to sit down and tell the Premier or the Minister for Education, dead on, this is what we’re going through. This is what we need.

“This is the challenge of being a nurse paramedic, a teacher in NSW today.”

The minister criticised the plan for a strike next week, saying it would disrupt families and students.

“I’m pretty disappointed. I’m on the side of the parents here,” Ms Mitchell told radio 2GB on Wednesday.

“(The union) just need to be in the (Industrial Relations Commission) with us and they will get an outcome.”

The case is due to come before the commission next month.

The teachers union suspended its industrial action in December to negotiate but says the government squandered the opportunity.

Teachers Federation president Angelo Gavrielatos told AAP the teacher walkout would have been foreseen by the government.

“There is significant feeling and anger across the teaching service and the response was exactly what we had predicted,” he said.

“The teacher shortage is caused by uncompetitive pay and unsustainable workloads.”

The national inflation figure surged to 5.1 per cent on Wednesday, but the government was pursuing a three-year award rate of 2.04 per cent.

The union wants a pay rise of between five and 7.5 per cent, as well as two extra hours of planning time.