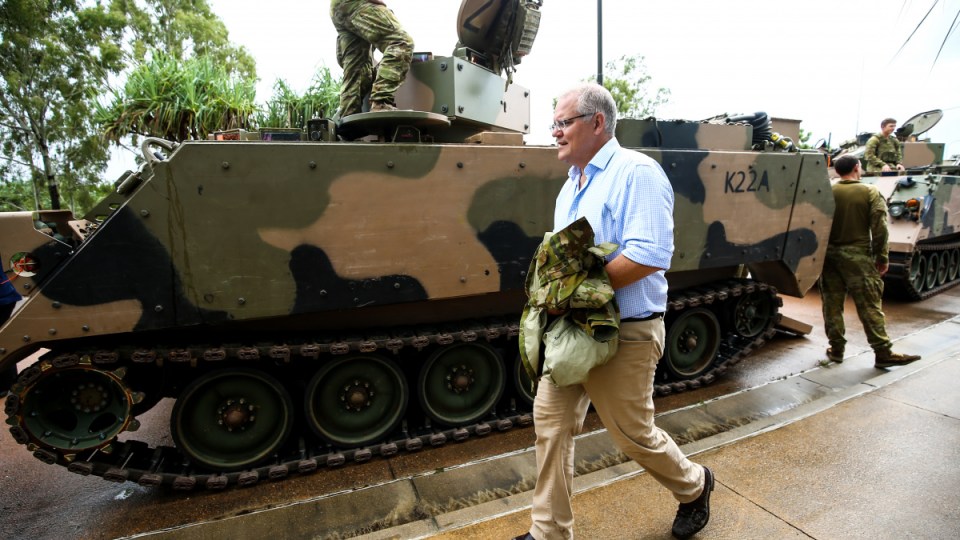 Defence preparedness is about much more than heavy machinery. Photo: AAP
opinion

This week the realities of war loom large.

We commemorate the service of the Anzacs and the horrors of the Shoah (the Holocaust), watch Russian forces continue their relentless advance on Ukraine, and wonder how long the Chinese government will consider it polite to wait before setting up a military naval base within 2000 kilometres of Australian shores. (For reference, that’s about the distance between Melbourne and Queensland’s Sunshine Coast.)

Nations are increasing their defence spending, with the World Bank estimating that after nine years of steady decline, global expenditure on defence by GDP is rising steeply.

If we take historian Yuval Noah Harari’s argument that national defence budgets act as a weathervane for confidence in international order, we are facing tumultuous times.

This week the Stockholm International Peace Research Institute announced that world military expenditure had, for the first time in history, exceeded $US2 trillion ($2.8 trillion).

Regionally, according to the Lowy Institute, 93 per cent of Australians think China’s military activities in our region negatively influence their views on China.

The Chinese government’s annual defence budget is currently about $242 billion. In dollar terms, it is now 10 times the level of their spend in 2000. The US spend is upwards of $700 billion.

On the home front, Australia is looking at a record $46.8 billion spend.

Earlier this year, Prime Minister Scott Morrison announced a 30 per cent increase in the number of permanent Australian Defence Force personnel, up to 80,000 people, by 2040.

Really, that’s a drop in the territorial seas. We can’t be expected to follow Finland’s lead of mandatory national service to arm citizens as a deterrent to another Russian land invasion (though it may have helped Ukraine).

Instead, modern warfare preparedness in Australia looks like waiting out threats of force, defending against cyber attacks, developing advanced manufacturing capabilities with a workforce to match, and building strategic alliances for real military protection and local loyalty.

While avoiding the glorification of war, Australia has an opportunity to undertake a sophisticated plan to encompass conflict preparedness into our economy, which boosts productivity and builds in security protections.

Whoever came up with the REDSPICE acronym – hats off to you. It’s my new favourite Spice Girl. REDSPICE stands for ‘Resilience, Effects, Defence, Space, Intelligence, Cyber, Enablers’. It’s a strategy that aims to encompass the industry investment and training opportunities that will protect our nation.

It includes the very healthy $9.9 billion announced in the latest federal budget to support cyber security.

And although self-reported financial losses due to cyber attacks are up to $33 billion a year in Australia, the real fear is that critical infrastructure or essential services will disrupt the nation’s capacity to function. Already about one-quarter of cyber incidents reported to the Australian Cyber Security Centre relate to critical infrastructure or essential services.

The CSIRO has recommended that “a skilled and productive workforce is essential for economic growth, with innovation requiring excellence and creativity across the range of disciplines”.

Industry organisations like AustCyber and Data61 must be supported to develop education and training frameworks, in line with the world-leading US model that categorises necessary roles required across the cyber security landscape.

Some analysts predict an annual earnings growth on investment of 19 per cent over the next five years in Australia’s aerospace and defence industry. The quantum technology sector could create 16,000 new jobs by 2040.

These are industries that can contribute to real, innovative defence solutions.

Israel, no matter what you think of its internal politics, has demonstrated that the best defence is a supreme technological response driven by innovation and investment, complemented by a healthy relationship with the US.

Which leads us to the importance of building our value as an intelligent and wealthy nation in service to neighbours and allies.

Technological developments that secure our economic growth mean strong and trusted trade relations with our neighbours and the ability to proactively offer superior defence solutions. A growing Australian economy also means a greater capacity to offer aid in our region.

Defence has been at the heart of global advancements in technology since humans first came into conflict. Life or death situations have a way of focusing the mind and motivating co-ordinated action.

The horrors of war are front of mind, but as the adage goes, the best offence is a good defence.

If Australia is able to invest with foresight and include all citizens in incidental security preparedness, defence preparedness gives Australia a way to boost productivity and security.