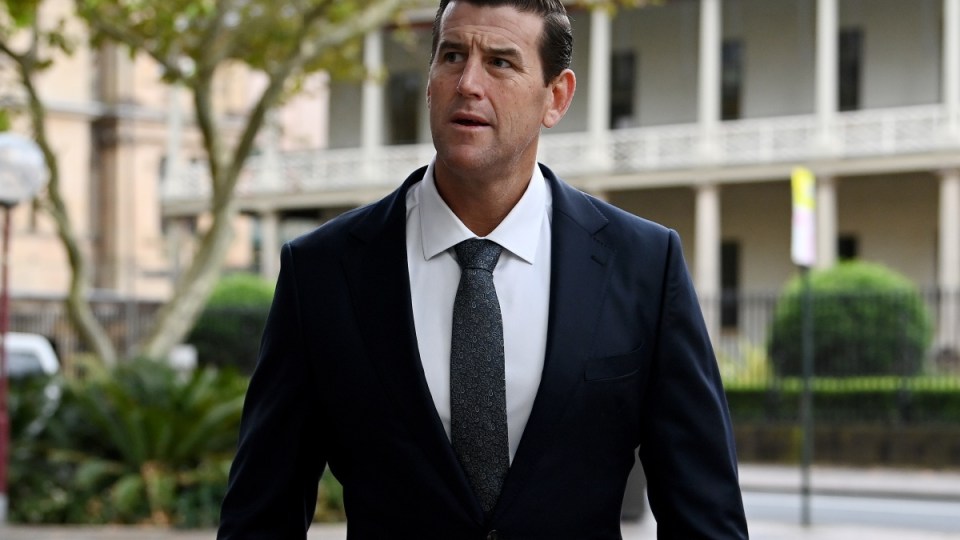 One of the witnesses testifying for Ben Roberts-Smith is accused of attacking a police officer. Photo: AAP

A former SAS soldier in Sydney to testify for Ben Roberts-Smith in his Federal Court defamation case has been charged for allegedly attacking a police officer.

The witness, who must legally be referred to as Person X, and not the pseudonym adopted for the defamation trial, appeared before Central Local Court on Wednesday.

He was granted bail to fly home, but must return for his court hearing and sentencing.

It comes after another witness codenamed Person 35 on Wednesday spoke about his troop clearing a Taliban compound dubbed Whiskey 108 in Uruzgan province in 2009, when he heard a radio call that a tunnel was found.

He described the hidden opening close to an animal pen, with livestock feed piled on top of a mesh covering to hide the secret entrance.

While his team commander trained his rifle onto the opening, there was a discussion as to who would enter the tunnel.

“Ben volunteered to clear it and I laughed at him,” he said.

Mr Roberts-Smith “wasn’t going to fit” and Person 35 was more suitable, so removed his body armour and his long M4 gun to move into the rough-cut hole.

The initial entry was small, and difficult to manoeuvre through, he said, but once down and under the ground it opened up enough to “shuffle on one knee forward” and into a larger room.

He poked his head around and with his pistol, cleared all sides of the enclosure, he said.

Arthur Moses SC on behalf of Mr Roberts-Smith asked if he located or observed any individuals in the tunnel.

Person 35 did find a large cache of weaponry and communication devices, and took these back to the surface.

Mr Roberts-Smith’s former patrol commander Person Five also recently backed up his claims that “no men” were found inside the tunnel.

But the media outlets being sued for defamation allege two Afghan men willingly emerged and surrendered to Australian troops.

Person Five who finished giving evidence on Tuesday denied ordering a “rookie” to execute one of the prisoners to get his first kill in action.

His second-in-command Mr Roberts-Smith was allegedly left to facilitate this direction and is accused of executing the other prisoner with a prosthetic leg.

Both men denied this and all accusations of wrongdoing.

Person 35 is appearing on behalf of his friend Mr Roberts-Smith who is suing The Age, The Sydney Morning Herald and The Canberra Times for defamation.

The war veteran denies all reported claims he committed war crimes in Afghanistan including murder, and acts of bullying and domestic violence, while the mastheads are defending them as true.

Person Five testified his troop was clearing along the compound walls when he was called back to the tunnel entrance, and was present when Person 35 crawled inside.

Person 35 on Wednesday could only remember Person 29 and Mr Roberts-Smith there at the time.

It contradicts evidence of other SAS soldiers who appeared on behalf of the newspapers, who provided another version of events.

An elite serving soldier codenamed Person 42 said a group of agitated women alerted his squad to the entrance where at least two men came out – unarmed, freely and relatively quickly.

Person 42 said the discovery was made alongside Person 35.