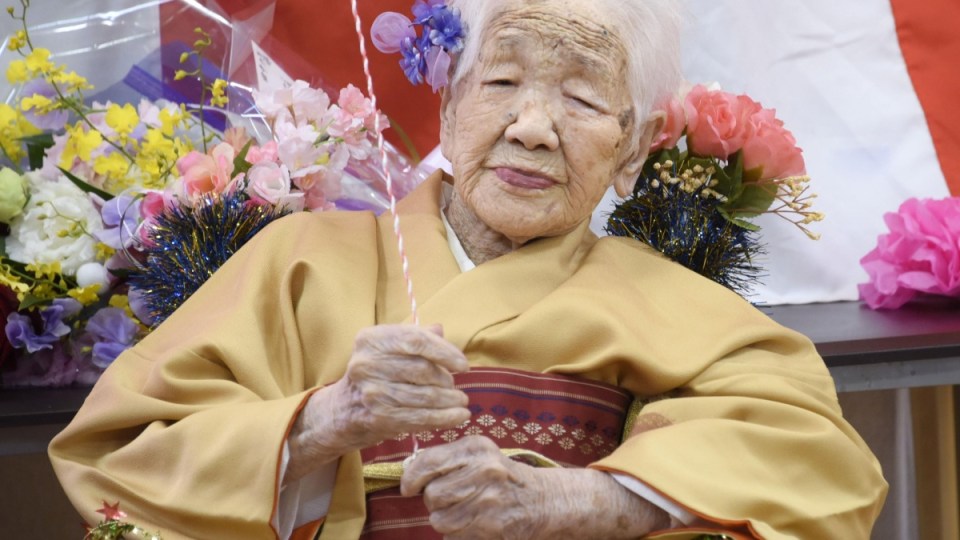 Japanese authorities confirmed the death of the world's oldest woman, Kane Tanaka at the age of 119. Photo: Kyodo via AP

The world’s oldest person, Japan’s Kane Tanaka, has died at 119 years of age, authorities of Japan’s Fukuoka prefecture have confirmed.

Born on January 2, 1903 in the old village of Wajiro, which is now part of the city of Fukuoka on the southern island of Kyushu, Tanaka died in a hospital in the city on April 19 at the age of 119 years and 108 days.

Ms Tanaka lived through five Japanese eras – Meiji, Taisho, Showa, Heisei and today’s Reiwa – and had set herself a goal of turning 120 next year, according to her family.

She was recognised by the Gerontology Research Group and Guinness World Records as the oldest woman and the oldest person in the world in 2019.

At the age of 19 she married, and the family got ahead running udon noodle restaurants.

Ms Tanaka had lived in a nursing home for the past few years, and her presence was common in media articles and TV programs on her birthday or the national Day of Respect for the Elderly.

Her favourite food was chocolate and she liked carbonated drinks, as was often seen in the photos and videos of her published in local media.

Ms Tanaka was supposed to take part in the Olympic torch relay of the Tokyo Olympics, but she ultimately opted out due to concern about the spread of COVID-19.

After her death, the oldest living person became French nun Lucile Randon, better known as Sister Andre. She is 118 years and 74 days old.

The oldest Japanese woman is Fusa Tatsumi, who turned 115 on Monday. She is also the fifth oldest person in the world on record.