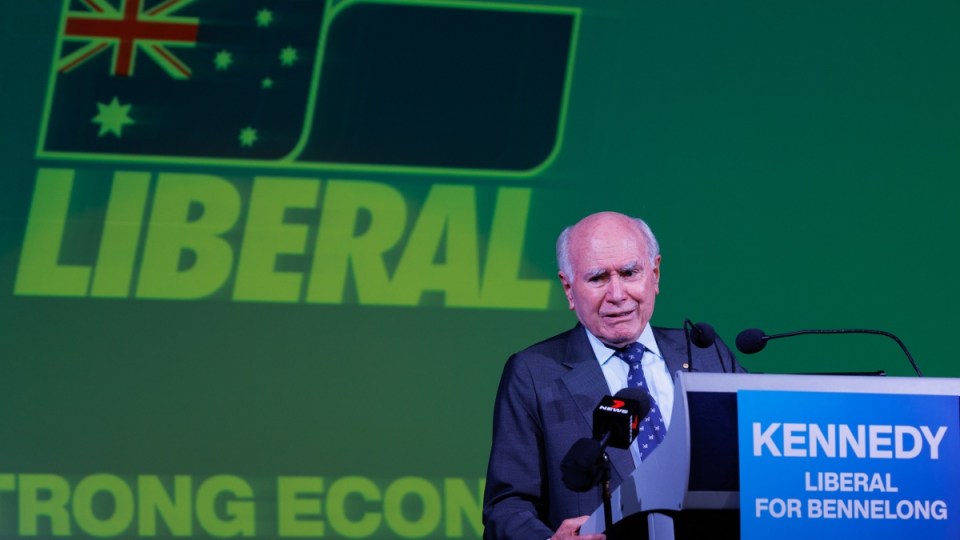 As the government fights for its life, John Howard, the Liberals’ living icon, has been on the campaign trail.

It’s not all been smooth sailing for the veteran, however. When Anthony Albanese had his now-infamous numbers lapse, Howard’s first reaction was an understanding “So what?”

This undermined the government’s exploitation of Albanese’s gaffe, bringing a quick clean up by Howard the following day.

On Saturday, Howard was campaigning in his old seat of Bennelong, which he lost, with the election, in 2007.

We hadn’t heard the “groupies” sledge before. The government’s favourite attacks have been to say the teals are “fakes” and a vote for them is a vote for Labor. It’s claimed the teals – some of whom do share information and resources – are really a “party”. And it’s deeply frustrating for the Liberals that many of the teals are receiving generous funding from Climate 200.

The Liberals are using sledgehammers against the teals. But in the seats where these independents are considered seriously competitive with the Liberal incumbents, notably North Sydney and Wentworth in Sydney and Goldstein and Kooyong in Melbourne, could such attacks be counterproductive?

In an election when voters are disillusioned with the main parties, including their generally disrespectful tone, the Liberals have to take care in how they mount their arguments against these candidates who are running on issues such as integrity and, at least by implication, advocating a better way of doing the political conversation.

To dismiss them as “groupies” sounds insulting (and somewhat old-fashioned).

Regardless of the arguments for and against their election, many of the teals have impressive backgrounds and present a good deal better than some of the backbenchers who sit behind Scott Morrison.

The suggestion by some of their critics that they’re just a version of Labor is simplistically binary. Allegra Spender (Wentworth) and Kate Chaney (Curtin) come from distinguished Liberal clans. Percy Spender, grandfather of Allegra, was central in the forging of the ANZUS treaty.

The teals are challenged by the government for standing only against Liberal MPs. This isn’t surprising, for a couple of reasons.

The issues at the centre of their campaigns, climate change and an integrity body, are ones on which the government is lagging.

Beyond that, the seats where they have most potential appeal are the Liberal leafy electorates, where many usually-Liberal voters are put off by Morrison.

One would expect many women, especially, in these seats may be attracted to teals who are articulate, professional women like themselves. These female voters would find Morrison’s ultra-blokey style uncongenial and alienating.

What many yet-to-decide voters will want from the Liberals is not insults against the teals but answers to the criticisms they are making of the government. But there are difficulties here – for example, how can a Liberal MP respond to a teal about an integrity commission when the Prime Minister says he won’t even introduce the integrity legislation unless Labor supports his model, which is almost universally criticised?

The government attacks the teals for not declaring who they would support in a hung parliament.

That might be frustrating some voters and the candidates could pay a price for that. And there is a real issue here. Despite the case made for its virtues, a hung parliament could bring instability and unpredictability.

But would you expect teals to be doing anything other than keeping their powder dry at this stage?

Firstly, in the real world of politics, why would they show their hand, even if they had made a decision? It would throw their campaigns off course.

Secondly, for some teals (as for some of the present cross benchers assuming they are re-elected) it would depend on the precise details of the hung parliament (who got how many seats, who won the popular vote), and on what was on offer from the two leaders. Spender last week was frank: She hadn’t made a decision and would want to see what was on the negotiating table.

Both Morrison and Albanese say they would do no deals with cross benchers in seeking to form government in a hung parliament. Maybe, maybe not.

But one would expect most cross benchers would have plenty of questions for the leaders as they made up their minds to whom they might give confidence and supply.

Labor victory fires up Tamil family’s hopes of return to their Biloela home
Perth residents urged to play it safe as massive storm rolls across region
Joe Biden says he’s not fussed by North Korea’s rumoured return to nuclear tests
ACTU hails Labor’s triumph as the first step to pay raises
Analyst: Sharemarket will be anxious about a Labor pact with Greens
French foreign minister hails defeat of Morrison and his ‘notorious incompetence’
Madonna King: Let’s remember those who gave their lives so that ours would be better
Today's Stories

View from The Hill: Could going too negative on ‘teals’ do Liberals more harm than good?