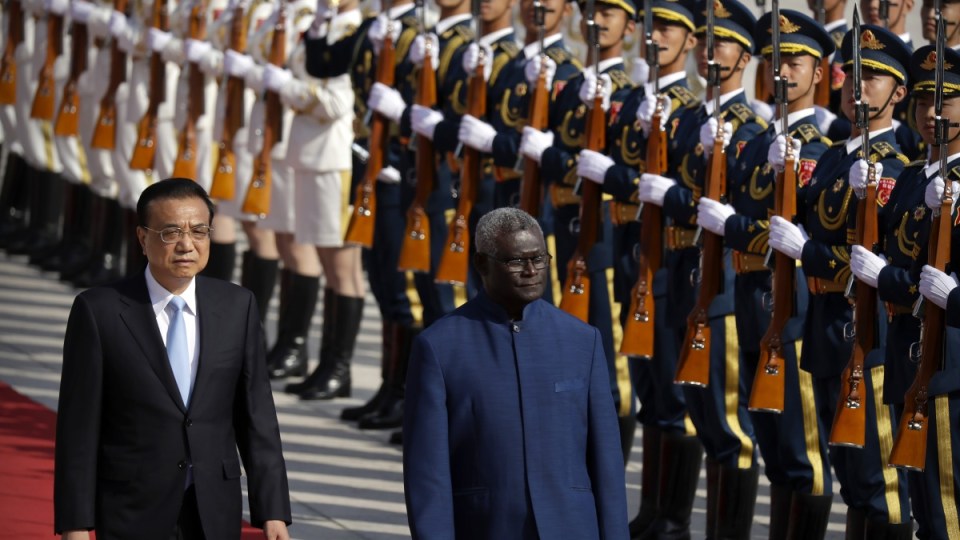 Manasseh Sogavare has played down fears around the Solomon Islands' security pact with China. Photo: AAP

The Solomon Islands prime minister has confirmed his government has signed a new security agreement with China, insisting it would not “undermine the peace and harmony of our region”.

The security pact allows China to send police and military personnel to the Solomon Islands “to assist in maintaining social order”, while also opening the door for Chinese warships to stop in port there for “logistical replenishment” – giving rise to worries of a possible Chinese naval base on the doorstep for Australia and New Zealand.

In his address to parliament, Manasseh Sogavare defended the security agreement as being directed entirely to “our internal security situation”.

He said it complemented a 2017 security arrangement with Australia, under which Australian police peacekeepers have been in the capital, Honiara, since riots in November.

“I ask all our neighbours, friends and partners to respect the sovereign interest of Solomon Islands on the assurance that the decision will not adversely impact or undermine the peace and harmony of our region,” he told parliament.

A draft of the agreement leaked online last month, and China’s Foreign Ministry announced on Tuesday it had been signed “the other day”.

Mr Sogavare was equally vague, telling parliament it had been signed “a few days ago”.

Australia had urged the Solomon Islands not to sign the pact, and sent Senator Zed Seselja, the minister for international development and the Pacific, for talks with Mr Sogavare last week.

Two top US officials – Kurt Campbell, the National Security Council Indo-Pacific co-ordinator, and Daniel Kritenbrink, the assistant secretary of state for East Asian and Pacific affairs – are due to visit the country this week for talks.

Mr Sogavare has said his government would not let China build a military base, and Beijing has denied seeking a military foothold in the South Pacific.

After China announced the agreement had been signed, Mr Seselja and Australian Minister for Foreign Affairs Marise Payne said in a joint statement they were “deeply disappointed”.

“Our consistently stated view, including from the perspective of Australia’s national interests, remains that the Pacific family is best placed to meet the security needs of the region,” they said.

Earlier this week, US State Department spokesman Ned Price said the agreement could destabilise the Solomon Islands and would set a concerning precedent for the wider Pacific region.

“Despite the Solomon Islands government’s comments, the broad nature of the security agreement leaves open the door for the deployment of PRC military forces to the Solomon Islands,” Mr Price said, referring to the country’s formal name, the People’s Republic of China.

New Zealand, Micronesia and other Pacific Island nations have also expressed concerns about the deal, as has the Solomon Islands’ main opposition party.

In his address, Mr Sogavare defended the pact, saying it would strengthen the country’s police and help them deal with future instability, and that it was “based on mutual respect for sovereignty and in compliance with domestic and international law”.

“Let me assure the people of Solomon Islands that we entered into an arrangement with China with our eyes wide open, guided by our national interests,” he said.