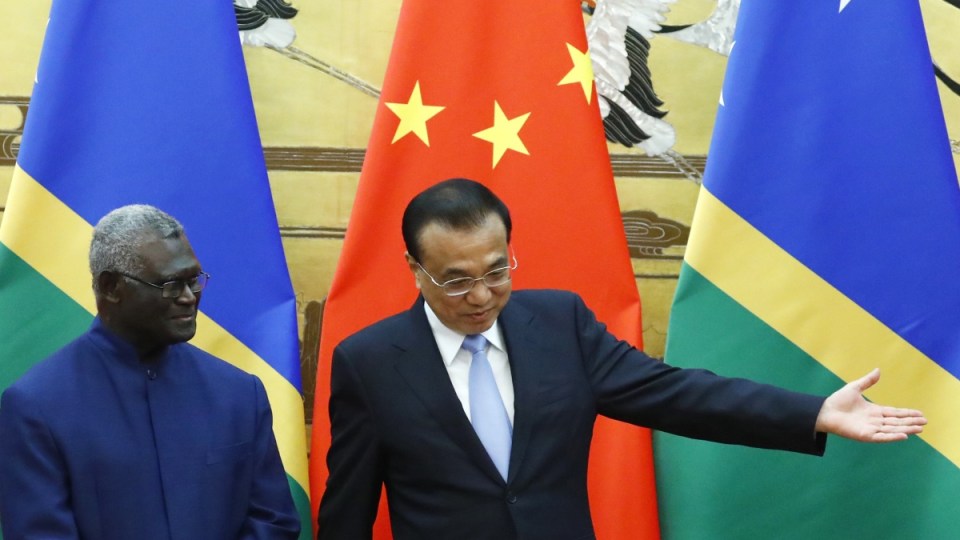 Beijing says a security pact between China and the Solomon Islands has been formally signed. Photo: AP

China says it has signed a security pact with the Solomon Islands, a move set to heighten the concerns of Australia, New Zealand and the US about the growing influence of Beijing in the region.

He did not give details of where, or precisely when, the signing took place.

Canberra is concerned the pact, details of which have not been made public, could be a step towards a Chinese military presence less than 2000 kilometres from Australia.

Reacting to the news, Labor has accused the Coalition government of putting Australia at risk.

“Despite all of his tough talk, on Scott Morrison’s watch our region has become less secure,” opposition foreign affairs spokeswoman Penny Wong wrote on Twitter.

Senator Wong accused the Prime Minister of failing to send Foreign Minister Marise Payne to the Solomon Islands to address Australia’s concerns, despite the government being “warned of this security pact in August”.

Senator Seselja issued a statement with Senator Payne on Tuesday night outlining Australia’s “deep disappointment” at the signing of the co-operation agreement.

“We respect Solomon Islands’ right to make sovereign decisions about its national security,” the senators wrote.

“Our consistently stated view, including from the perspective of Australia’s national interests, remains that the Pacific family is best placed to meet the security needs of the region.”

The senators outlined a lack of transparency in the development of the agreement and said the government continues to seek clarity on its terms and the consequences for the region.

“We welcome recent statements from Prime Minister (Manasseh) Sogavare that Australia is Solomon Islands’ security partner of choice, and his commitment that Solomon Islands will never be used for military bases or other military institutions of foreign powers,” the statement said.

“Australia is consulting the Pacific family in the spirit of regional openness and transparency in a manner consistent with our regional security frameworks.

“We will continue to strongly encourage the Solomon Islands to engage in regional dialogue and to work with the Pacific family first, including prior to seeking security assistance from China under this arrangement.”

Earlier on Tuesday, the Pacific islands nation was told China would send officials to the Solomons next month to sign co-operation pacts.

Although officials had previously initialled a security pact that would allow Chinese police to protect infrastructure and social order, ministers had not yet signed it.

On Monday, the White House said a high-level US delegation including Indo-Pacific co-ordinator Kurt Campbell would travel to Honiara this week to discuss concerns about China, as well as the reopening of a US embassy.

“Deliberate attempts to inflate tensions and mobilise rival camps are also doomed to fail,” Mr Wang, the Chinese spokesman, said on Tuesday, when asked about the scheduled visit.

Honiara’s parliament was on Tuesday told by Douglas Ete, chairman of the public accounts committee, Chinese foreign ministry officials would arrive next month.

“The PRC foreign affairs is heading to Honiara in the middle of May to sign multilateral agreements and cooperations with the Solomon Islands government,” he said, referring to the country’s formal name of the People’s Republic of China.

Mr Ete said the visit meant the two nations would increase co-operation on trade, education and fisheries, but added he rejected the idea of the Solomons signing a security pact with China to set up a military base.

Mr Sogavare told parliament the proposed security agreement would not include such a base.