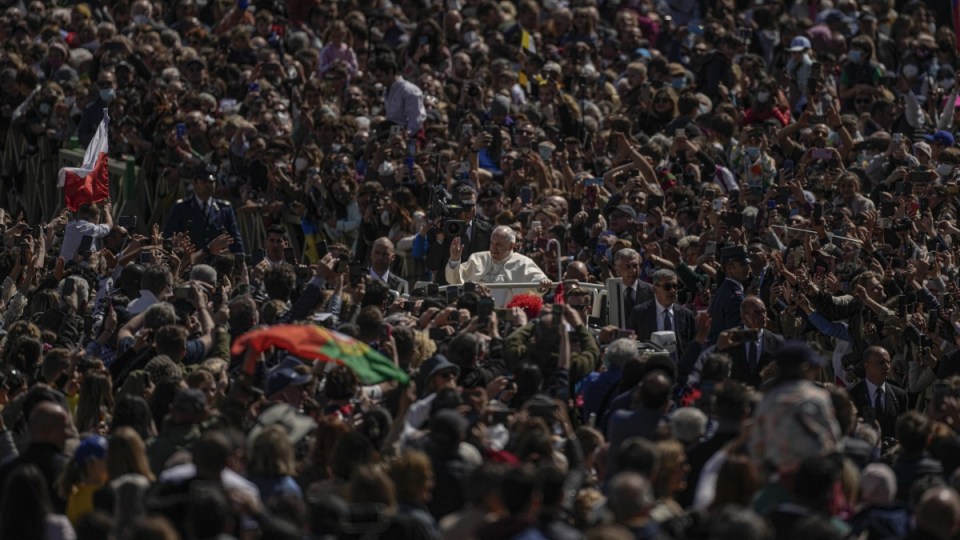 Pope Francis drives through the crowd at the end of the Easter Sunday mass in St Peter's Square. Photo: AP

Pope Francis has celebrated Easter Sunday mass in St Peter’s Square for the first time since the beginning of the coronavirus pandemic.

The pontiff, who has a knee ligament problem, limped badly as he stepped out from the back of St Peter’s Basilica to reach an altar set up on the steps outside, shaded by a canopy against brilliant sunshine.

Tens of thousands of people, numbered at 50,000 by the Vatican, packed the flower-bedecked square and a nearby boulevard to hear his words.

After the mass, Francis, who is 85 and also suffers from chronic back problems, was set to move to the central balcony of the basilica, where he will deliver a speech known in Latin as Urbi et Orbi (to the city and to the world), which pontiffs in recent decades have used to decry conflicts and injustices across the globe.

Video highlights of the Mass of the Easter Vigil, which Pope Francis attended in St. Peter's Basilica.

After the end of mass, Francis shook hands with prelates, then boarded the white popemobile for a whirl through the square to greet cheering well wishers among the rank-and-file faithful.

Meanwhile, in London, Archbishop of Canterbury Justin Welby called for Russia to declare a ceasefire and withdraw from Ukraine.

The leader of the Anglican church said Easter is a time for peace and not “blood and iron”.

Noting that in the Eastern Orthodox church followed by many in Russia and Ukraine Sunday marks the start of Holy Week – with Easter coming on April 24 – Archbishop Welby exhorted Russia to withdraw from Ukraine and commit to talks.

In an unusually blunt political remark, Welby also condemned the British government’s recent plan to send some asylum-seekers to Rwanda as going against God.

Warm weather and the easing of many pandemic restrictions – including what had been for most of the pandemic in Italy a mandatory outdoor mask requirement – have seen tourism boom in Rome, with many visitors flooding the city for Holy Week ceremonies that culminated on Easter.

In Spain, believers and secular enthusiasts flocked back in large numbers to Holy Week processions this week for the first time since the start of the pandemic after most health restrictions were lifted.