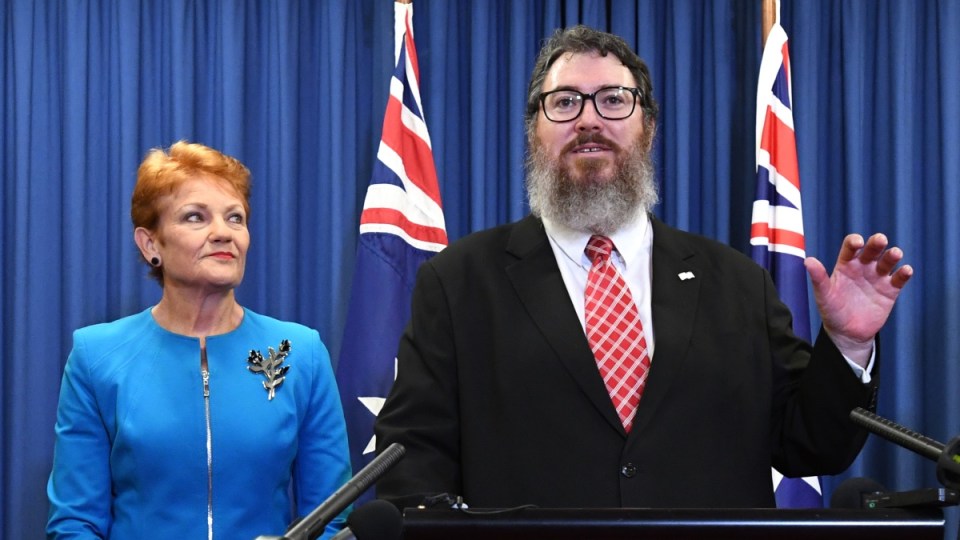 George Christensen caused the government a heap of trouble while he was in the Nationals, and is set to be a pest now he’s jumped ship.

A year ago Christensen announced he wouldn’t recontest at this election, saying “I think my time is done”.

Now he’s opted, just days after resigning from the Liberal National Party, to run as third candidate on the One Nation Queensland Senate ticket.

It had been earlier reported he’d tried to have the LNP disendorse him, so he could get this payout, but it had declined. (Christensen claims he is already likely entitled to the money but this is denied by government sources.)

At a news conference with his new leader, Pauline Hanson, Christensen said if he could help get Hanson and maybe her No.2 candidate elected it would be “the job done, because Pauline’s been a warrior for common sense conservative issues”.

Christensen, 43, member for the north Queensland seat of Dawson since 2010, has been extended an extraordinary degree of tolerance by his colleagues over the years. His party has treated him with kid gloves, despite some outrageous behaviour.

So indeed did his electorate. Regardless of his spending nearly 300 days in the Philippines between April 2014 and June 2018 – which earned him the title “the member for Manila” – the Dawson locals gave him a positive swing of more than 11 per cent in 2019.

Over the years Christensen periodically threatened to cross the floor and sometimes did, although he was equally likely to draw back after kicking up the dust.

In his book A Bigger Picture, Malcolm Turnbull has a diary entry saying Christensen kept threatening to move to the cross bench.

In late 2017 he encouraged Sky to report that an unnamed Coalition MP would quit the government if Turnbull remained prime minister, then changed his mind leaving a couple of presenters high and dry.

In the arguments over the handling of COVID-19, he featured prominently at anti-lockdown and anti-vaccination rallies.

In August he condemned the handling of the pandemic, declaring in a parliamentary speech: “Restore our freedoms, end this madness”.

Scott Morrison dissociated himself from Christensen’s views and the house voted to condemn his comments.

Christensen called the bluff of his peers and betters in the Nationals.

When tackled about his maverick backbencher Barnaby Joyce would say that taking him on would be fruitless, and just make things more difficult. Nationals deputy leader David Littleproud earlier this year described him as a “free spirit” while disagreeing with him.

Christensen and Joyce only spoke about his defection on Tuesday night. On the campaign trail on Wednesday, Joyce described his action as an “unwelcome distraction”.

Senator Matt Canavan months ago tried to talk Christensen out of retiring, believing he was an asset for the LNP and a great campaigner.

Canavan now describes his former colleague as “a coward” for “shirking away from battles in the LNP” in favour of the “echo chamber” of a minor party. He’d deserted the Nationals party members, Canavan said.

Canavan admits that Christensen could harm the LNP Senate vote in Queensland, where there are “a lot of angry people” from the debate over COVID and vaccines.

Christensen told the Courier Mail he should have joined One Nation “a long time ago”.

“The more I queried One Nation’s policies and looked at their constitution, their core beliefs, the things that Pauline has been campaigning on recently, just about everything aligned with my views.”

On Sky on Wednesday night he said he hadn’t deserted anyone because “my beliefs are exactly the same. I’ve just realised One Nation is more in tune with those thoughts.”

He rejected the gold-digging interpretation of his motives for running for One Nation.

He said he had fulfilled his “contract” because he had stuck with the LNP right to the end of the parliament before he “pulled the pin”.

He named not just the handling of COVID but the signing up to the 2050 net-zero target as among his beefs. One Nation was the only party in the parliament questioning “this religion of man-made climate change”.

“You get sick of defending the indefensible,” he said.

He said it was “not impossible” to win the Senate seat but it would be “a big ask”, although he claimed he was in One Nation “for the long haul”.

For a minor party, One Nation sure has a big umbrella.

In its earlier years George Christensen and former Labor leader Mark Latham (now in the NSW parliament) would never have imagined they’d end up wearing the same brand.

Have the Logies lost their mojo, or do new awards and the rise of the streamers signal a rebirth?
Madonna King: The answers to the ‘gotcha’ questions that every politician should know
Today's Stories

View from The Hill: New One Nation candidate George Christensen set to win from losing