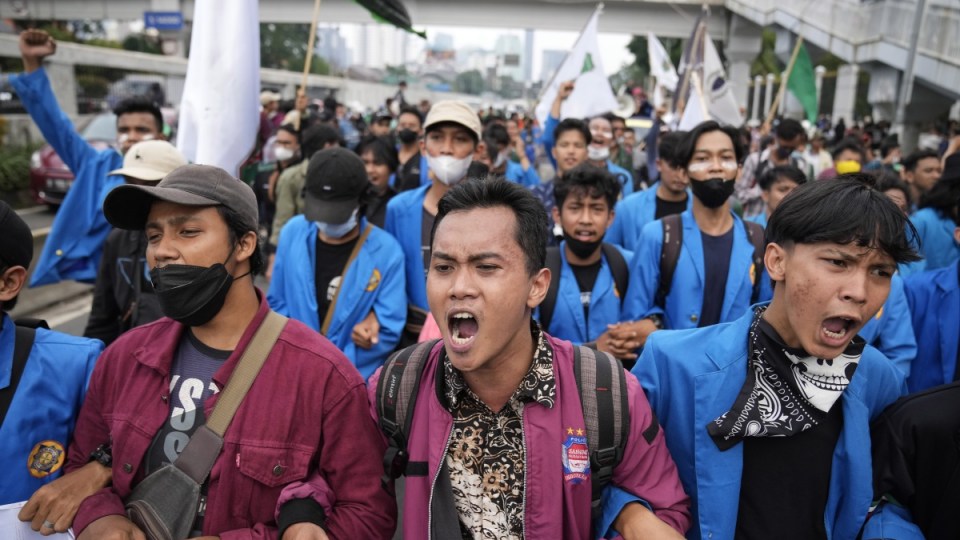 Crowds of demonstrators were seen running away from the scene outside parliament in the capital Jakarta, according to a Reuters witness, while Kompas TV said rocks had been thrown into the complex.

There were no immediate reports of violence or injuries.

The rally was one of several across Indonesia on Monday, including in South Sulawesi, West Java and Jakarta, where hundreds of students wearing neon jackets had marched towards parliament to complain about rising goods costs and the prospect of the president outstaying his two-term limit.

Jokowi, as the president is known, on Sunday sought to dampen speculation of a plan being hatched by his allies to keep him in power longer.

The idea of a extending his tenure either by changing the constitution or delaying the 2024 election, has gained momentum lately in the world’s third-largest democracy after some influential political figures publicly backed it.

University students have traditionally been at the forefront of efforts to protect Indonesia’s democratic gains after taking to the streets in 1998 during huge protests that helped topple former strongman President Suharto.

The idea of allowing more than the maximum two, five-year terms as president has fuelled concern about a threat to hard-won democratic reforms.

On Sunday, for a second time in under a week, Jokowi, 60, urged ministers and security chiefs to cease discussion of the issue to prevent public speculation and said it was clear that an election would be held in February 2024, as planned.

Jokowi has retained a high approval rating since he was first elected in 2014, but a recent survey showed more than 70 per cent of Indonesians reject the extension plan.

He has been criticised for his ambiguous stance on the issue, calling it a slap in the face and just “an idea”, but without explicitly rejecting it or ruling out staying in power longer.